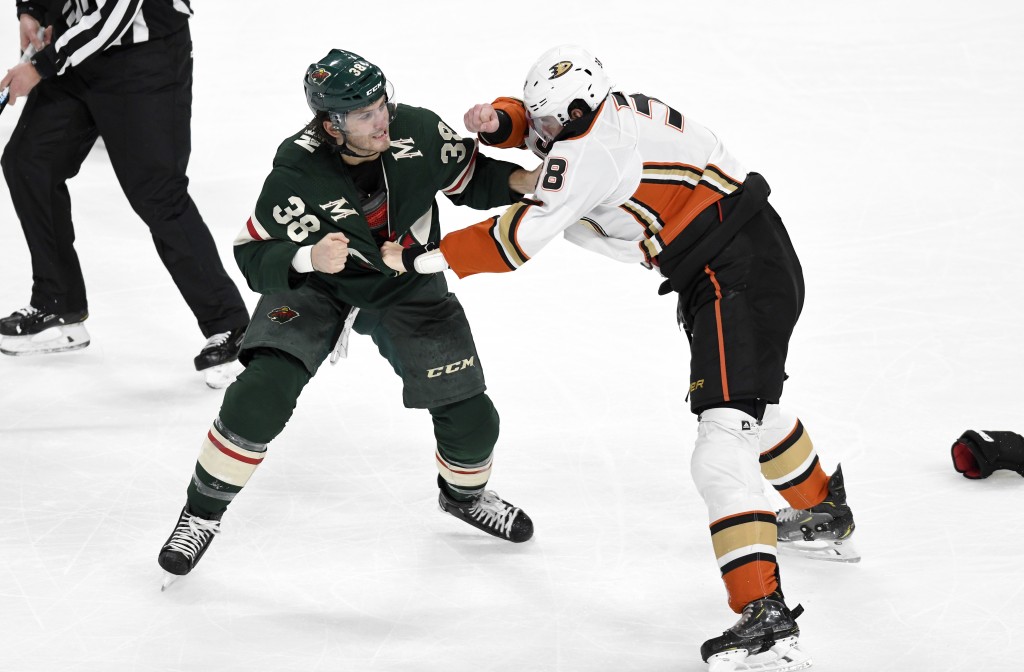 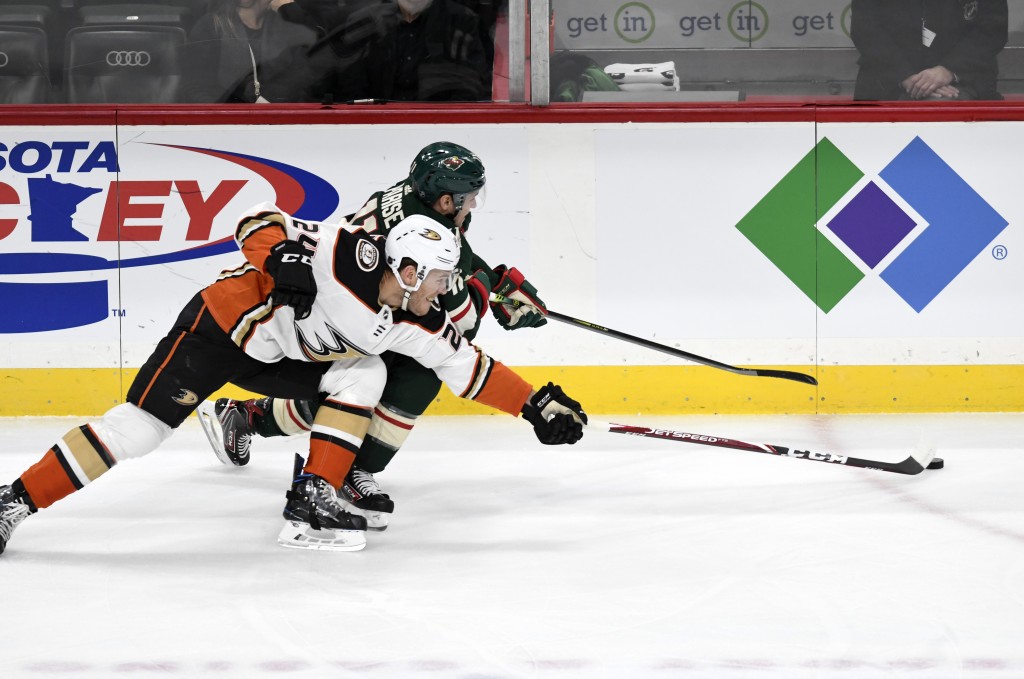 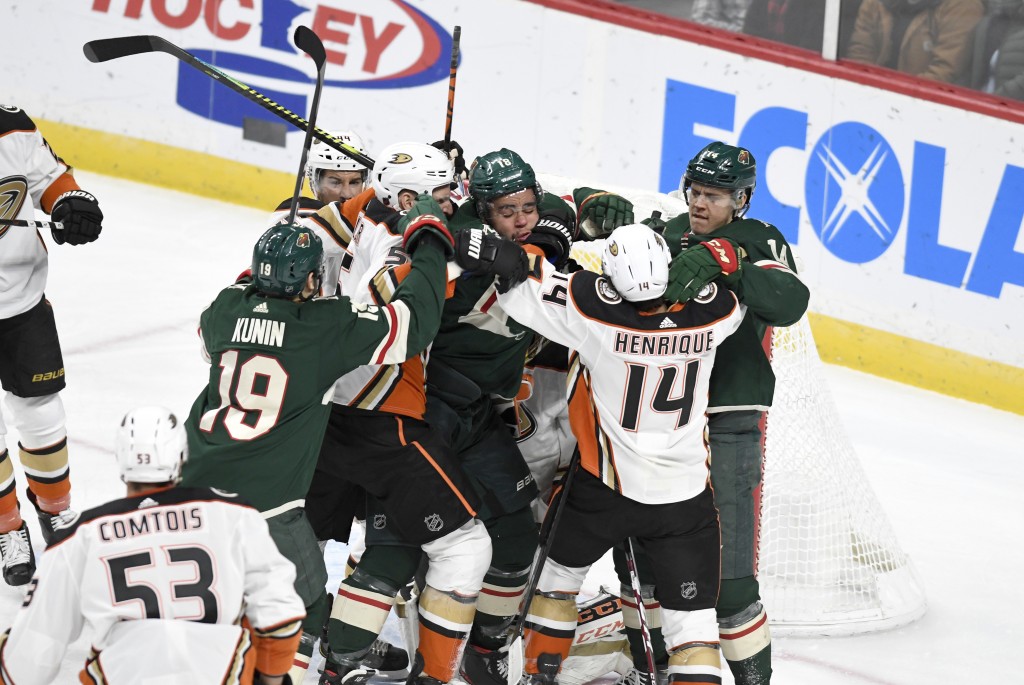 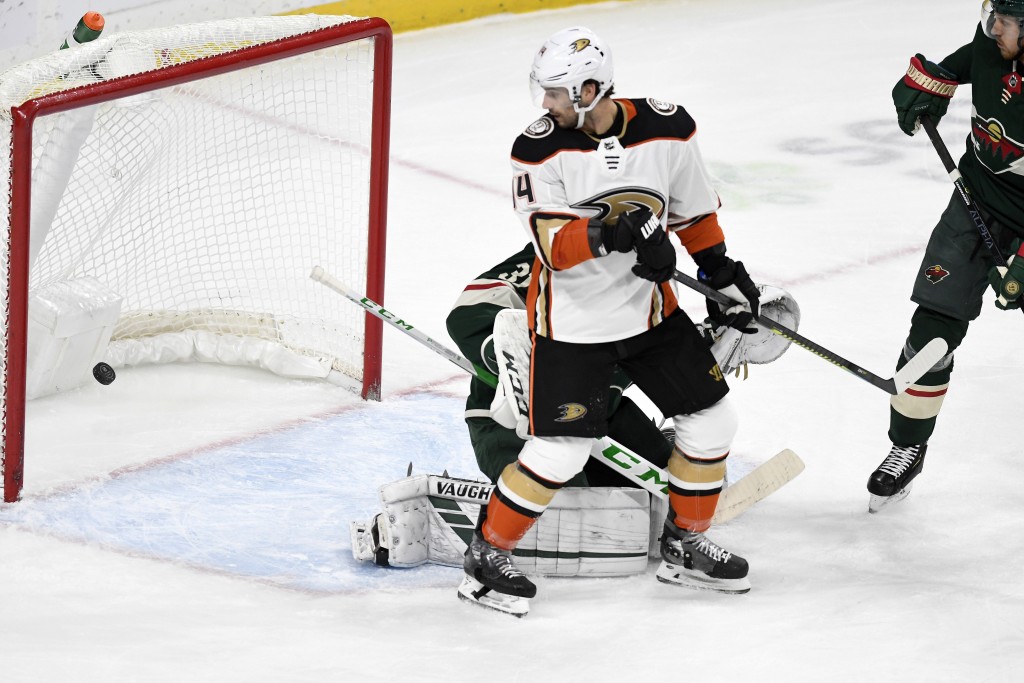 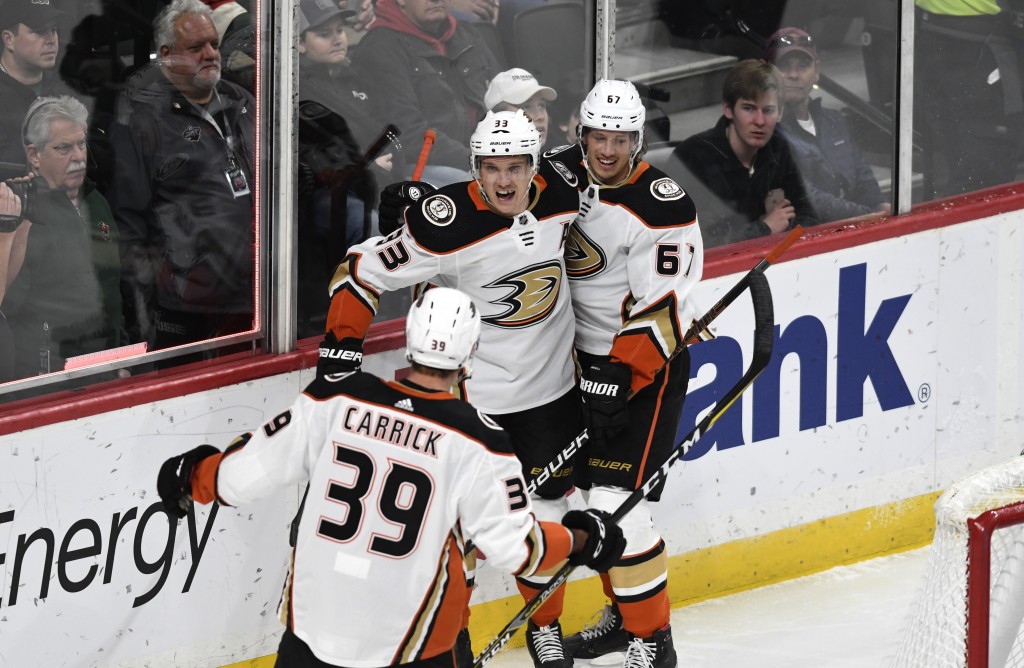 ST. PAUL, Minn. (AP) — Rickard Rickell and Max Comtois scored in the shootout for Anaheim, and the Ducks fended off the Minnesota Wild 3-2 on Tuesday night for their first win in their last six road games.

Rakell and Cam Fowler scored for the Ducks in a dominant first period during which they had a 14-1 advantage in shots on goal and the Wild lost center Eric Staal to an injury.

Ryan Hartman put the Wild on the board in the second and Ryan Donato tied the game early in third when Zach Parise hustled behind the net to knock Ducks defenseman Josh Manson off the puck and set up his teammate in front of goalie John Gibson.

Donato had a breakaway early in overtime that Ryan Getzlaf thwarted with a tripping penalty, and the Wild failed to convert on the power play for the fifth time.

Gibson, who is 6-3-1 in 11 career starts against Minnesota, denied Parise in the shootout. Kevin Fiala went wide right with his attempt.

The Wild started a three-game homestand that is their longest to date this season, after playing 20 of their first 30 games on the road, the most in the NHL in that span in 14 years. They are 7-1-3 at Xcel Energy Center, giving them confidence in a continuation of their recent surge once the schedule begins to balance out. Until losing 6-2 at Carolina on Saturday, the Wild went 8-0-3 in their previous 11 games for the second-longest point streak in franchise history.

The Ducks have struggled more often than not in their first season under coach Dallas Eakins, going 3-8-4 in their previous 15 games and 1-3-1 in their last five before arriving in Minnesota. Their latest setback was a knee injury Friday to left wing Nick Ritchie that could keep him out for two months or more, though Manson returned at Minnesota after a 19-game absence due to a knee injury.

After losing consecutive 3-2 games to league-leading Washington on Friday and at Winnipeg on Sunday, the Ducks seized the lead barely three minutes in. Sam Carrick's wrist shot was stopped but not controlled by Wild goalie Kaapo Kahkonen, and Jakob Silfverberg swooped in to snag the rebound and slip it across the crease to Rackell for his ninth goal of the season. Then about seven minutes later on a power play, Fowler zipped a one-timer through traffic that Kahkonen, screened by Ducks center Adam Henrique, did not appear to see.

The Wild, meanwhile, put only one shot on target in the first period and lost Staal in the process. Staal, who's tied for the team lead with 21 points, collided headfirst with linesman David Brisebois after chasing the puck along the boards and was down on the ice for a few minutes before slowly leaving with assistance for examination. The Wild were already missing three key players in goalie Devan Dubnyk, center Mikko Koivu and defenseman Jared Spurgeon.

NOTES: The Wild honored Koivu for playing in his 1,000th career game on Dec. 1, bringing back former teammates Niklas Backstrom, Kyle Brodziak, Marian Gaborik and Nick Schultz for the ceremony as a surprise to the 36-year-old captain and center. Koivu's parents, wife and three children were also on the ice as Gaborik, who leads Koivu by 16 goals on the franchise list, presented him the traditional silver stick. ... Koivu (lower body) and Spurgeon (upper body) both missed their third straight game. Dubnyk has missed the last 12 due to a serious health matter his wife has been dealing with. ... Fowler tied Rakell and Marty McInnis for ninth place on the franchise list with 25 career power-play goals.

Ducks: Return home to face Los Angeles on Thursday. Anaheim hosted its Southern California rival just 10 days ago, winning 4-2. The Kings are the only team behind the Ducks in the Western Conference standings.

Wild: Host Edmonton on Thursday. They beat the Oilers 3-0 at home on Oct. 22.