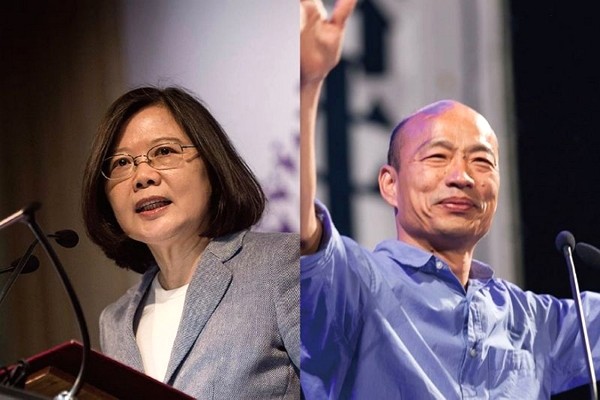 TAIPEI (Taiwan News) — The results of the most recent poll by one Taiwanese media outlet show Taiwanese President Tsai Ing-wen (蔡英文) to have a commanding lead over itinerant Kaohsiung mayor and Kuomintang (KMT) presidential candidate Han Kuo-yu (韓國瑜) in the run-up to the 2020 election.

According to a TVBS released on Tuesday (Dec. 10), 51 percent of respondents said they would vote for Tsai and her running mate William Lai (賴清德), whereas only 29 percent expressed a desire to vote for Han and KMT vice-presidential candidate Simon Chang (張善政). People First Party (PFP) presidential candidate James Soong (宋楚瑜) and running mate Sandra Yu (余湘) received seven percent of support, while 14 percent of respondents said they had not decided.

TVBS poll experts said they suspected that the increased support for the Tsai-Lai ticket was due to Han's recent unorthodox tactic of asking his supporters to lie in opinion polls. Tsai and Lai saw their support grow from 36 to 45 percent among the 50-59 age group, which is known to be one of the strongest demographics for Han.

It was worth noting that 38 percent of the respondents expressed their dissatisfaction with Tsai's performance as president over the last four years. The poll was evenly distributed between cell phones and landlines with a total of 1,120 samples from Taiwanese voters 20 years or older, reported Storm Media.

A poll released by the Green Party on Wednesday (Dec. 11) showed that Tsai is leading Han by 29.2 percentage points and that the Democratic Progressive Party (DPP) was favored by 31.1 percent of Taiwanese compared to the KMT's 21.7 percent. Interestingly, respondents were also asked about their impression of the Chinese Communist Party (CCP), with nearly 70 percent saying they felt negatively about it, reported Liberty Times.