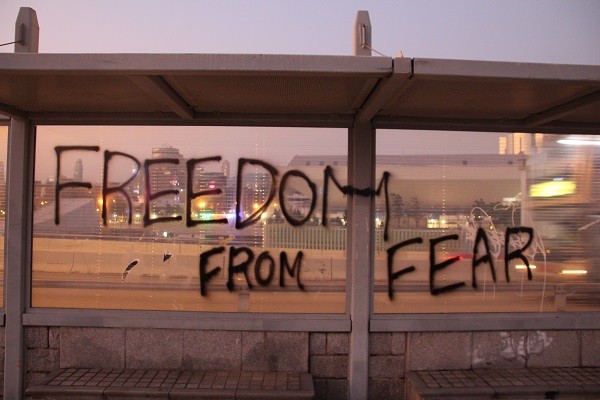 TAIPEI (Taiwan News) — This photo of graffiti left by an unknown protester was taken just before sunset on a Saturday, Nov. 23 on a pedestrian bridge overlooking the campus of Hong Kong Polytechnic University (PolyU), where hundreds of protesters clashed with police in the week leading up to the city's district council elections, ultimately becoming trapped inside.

The hastily scrawled words "FREEDOM FROM FEAR" are accentuated on the bridge's transparent paneling by the dying light, a poignant reminder of the culture of fear that has gripped the special administrative region in the more than six months since the protests began, as well as those who have risked their futures, family relationships, and lives to defy it.

The message may also evoke memories of the scenes that played out that third week of November at the central Kowloon university: vehicles set alight by Molotov cocktails; protesters, journalists, and medics alike rounded up; and desperate escape attempts as police tightened the noose, with a handful of those holed up lowering themselves from another nearby bridge to the highway below.

The police siege of PolyU ended after 12 days, over 1,300 arrests, and several hundred hospitalizations. The day after the photo was taken, Hong Kong voters delivered 17 of the city's 18 district councils to the pro-democracy camp.