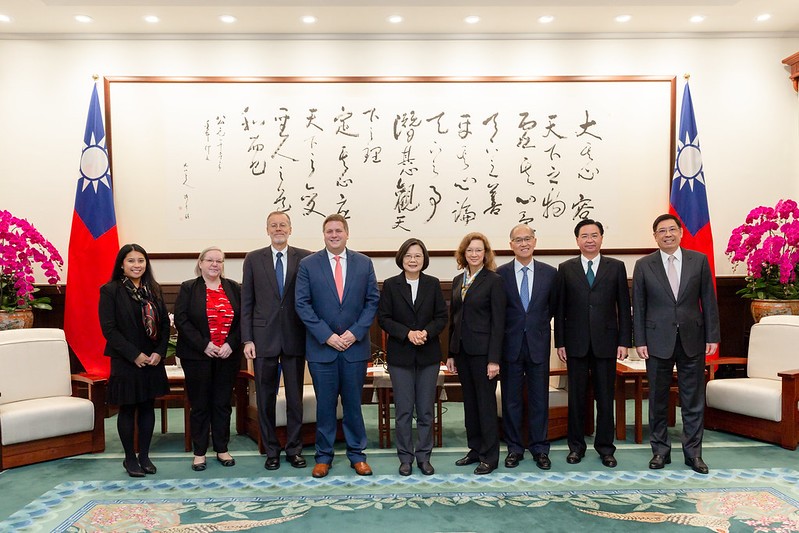 President Tsai Ing-wen said Dec. 9 that Taiwan is committed to starting negotiations with the U.S. on a bilateral trade agreement and expanding related exchanges across the board to boost economic growth.

Taiwan is a reliable commercial partner for the U.S., Tsai said. This is evidenced by the number of U.S.-headquartered heavyweights such as Amazon.com Inc., Cisco Systems Inc., Google LLC and Microsoft Corp. setting up innovation and R&D centers in the country, she added.

Other U.S. companies to invest in Taiwan include Micron Technology Inc. and Applied Materials Inc., said Tsai, with the former investing NT$66 billion (US$2.17 billion) into a center of excellence for DRAM while the latter launched a display manufacturing center and laboratory at Southern Taiwan Science Park in Tainan City.

Tsai made the remarks while receiving a delegation led by Ian Steff, assistant secretary for global markets and director general of the U.S. and Foreign Commercial Service in the U.S. Department of Commerce’s International Trade Administration, at the Presidential Office in Taipei City.

The delegation is visiting on a five-day fact-finding trip to discuss economic, trade, and investment issues and to take part in the third Taiwan-U.S. Digital Economy Forum.

According to Tsai, Taiwan’s economic relationship with the U.S. is going from strength to strength. This healthy state of affairs is illustrated by Taiwan sending the largest delegation among all participants who attended the 2019 SelectUSA Investment Summit, she added.

In light of the U.S.-China trade conflict, Tsai said, the government will continue to secure Taiwan’s irreplaceable role in the global high-tech supply chain, adding that working alongside the U.S. for mutual benefit and prosperity is key to achieving a successful outcome. (YCH-E)