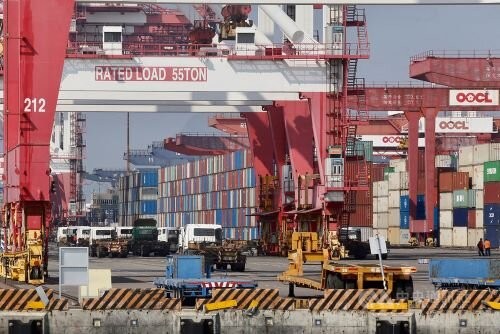 Taiwan's exports rose more than 3 percent from a year earlier in November, breaking a two-month downward streak, as Taiwanese companies raised their local production in a bid to avoid the impact of trade friction between the United States and China, the Ministry of Finance (MOF) said Monday.

The ministry said that another reason for the country's outbound sales returning to a growth pattern in November was because foreign buyers were placing more orders with Taiwanese exporters to avoid U.S. tariffs on China-made products amid the Washington-Beijing trade dispute.

In November, Taiwan's exports rose 3.3 percent from a year earlier to US$28.58 billion after falling 1.5 percent in October and 4.6 percent in September, according to data compiled by the MOF.

It also indicated that imports for November rose 5.8 percent from a year earlier to US$24.30 billion, with a trade surplus of US$4.28 billion, down US$430 million from last year.

In November, electronics component makers, in particular in the semiconductor industry, benefited from solid demand, reporting US$10.59 billion in exports, up 10.1 percent from a year earlier, with outbound sales in semiconductors up 12.9 percent at US$9.54 billion, the MOF said.

The electronics sector accounted for about 37 percent of Taiwan's total sales, with semiconductor makers making up 33.4 percent, the MOF added.

The MOF said that as suppliers in the information and communication technology industry invested more in Taiwan, the industry saw exports for November rising 22.7 percent from a year earlier to US$4.02 billion, a new monthly high.

As for optoelectronics makers, exports also moved higher by 8.6 percent from a year earlier to US$987 million as demand for camera lenses and flat panels increased, the MOF said.

In addition to companies diverting manufacturing to Taiwan and more investments made by Taiwanese firms amid global trade tensions, Department of Statistics Director-General Beatrice Tsai (蔡美娜) said foreign buyers have started to build up their inventories by raising their purchases from Taiwanese suppliers in high tech gadgets in November because the next Lunar New Year holiday will arrive in January instead of February.

In November, exports of base metal and related products, plastics and rubber items, machinery and chemical products fell 6.5 percent, 6.3 percent, 6.6 percent and 12.2 percent, respectively, from a year earlier to US$2.22 billion, 1.84 billion, US$1.84 billion and US$1.50 billion, the MOF's data showed.

The MOF said China and Hong Kong remained the largest buyers of Taiwan's merchandise valued at US$12.35 billion in November, up 8.0 percent from a year earlier. This accounted for 43.2 percent of Taiwan's total outbound sales, on the back of rising demand for Taiwan's electronics components, base metal and optoelectronics devices.

Looking ahead, Tsai said, Taiwan's exports for the fourth quarter are estimated to grow slightly as more Taiwanese firms return home to invest and major manufacturers such as contract chipmaker Taiwan Semiconductor Manufacturing Co. expand their production and upgrade their technologies.

The estimate echoed an earlier forecast by the Directorate General of Budget Accounting and Statistics, which said Taiwan's fourth quarter outbound sales will rise 1.1 percent from a year earlier.