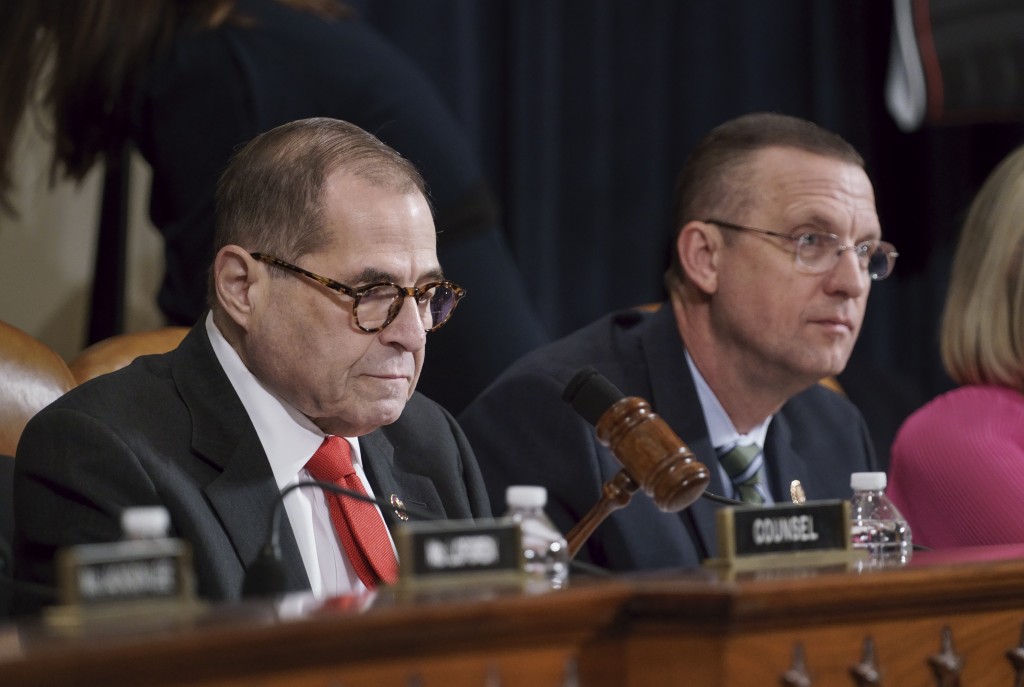 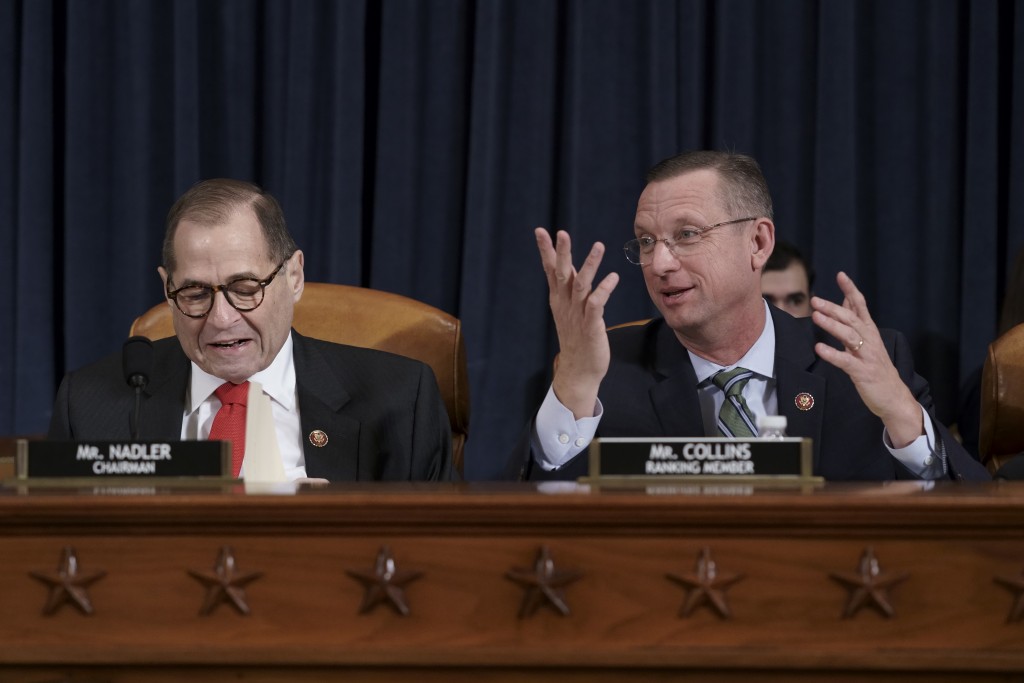 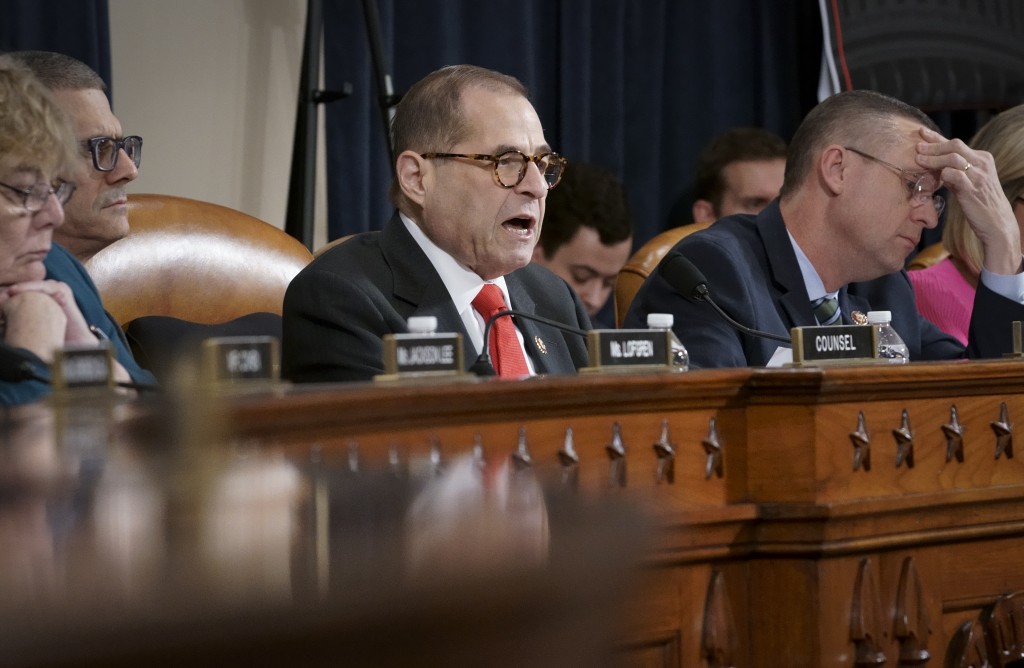 Weighty questions about a president's alleged malfeasance and whether that merits the extraordinary step of impeachment drew some too-simple answers at a House hearing Monday aimed at laying the foundation for charges that Donald Trump abused his power on Ukraine.

A sampling of rhetoric from the House Judiciary Committee:

Rep. DOUG COLLINS, top Republican on the committee: “We don’t have a crime.”

THE FACTS: That's an opinion, not an established fact. But while Democrats do allege Trump engaged in some criminal acts, the constitutional grounds for impeachment do not require any crime to have been committed.

In setting the conditions of treason, bribery or high crimes and misdemeanors, the Founding Fathers said a consequential abuse of office — crime or not — was subject to the impeachment process they laid out.

Democrats say Trump abused his power in a July 25 phone call when he asked Ukrainian President Volodymyr Zelenskiy for a “favor" in investigating Democrats. That was bribery, they say, since Trump was withholding nearly $400 million in military aid that Ukraine depended on to counter Russian aggression.

As they draft articles of impeachment, Democrats are also alleging crimes involving obstruction of justice as part of their case that Trump abused his office.

Rep. JERROLD NADLER, Democratic chairman of the House Judiciary Committee: “Multiple witnesses — including respected diplomats, national security professionals, and decorated war veterans — all testified to the same basic fact: President Trump withheld the aid and the meeting in order to pressure a foreign government to do him that favor. ... These facts are not in dispute.”

THE FACTS: He's right that plentiful testimony points to Trump conditioning military aid to Ukraine on the investigation he wanted Ukraine to conduct on Democrats. But is it a rock-solid case?

None of the witnesses who testified in House Intelligence Committee hearings last month could personally attest that Trump directly tied the release of the military aid to an agreement from Ukraine to conduct the investigations.

Gordon Sondland, Trump’s ambassador to the European Union, testified to a “quid pro quo” that involved arranging a White House visit for Zelenskiy in return for Ukraine announcing investigations of Burisma, a Ukrainian gas company, and a discredited conspiracy theory that Ukraine had interfered in the 2016 U.S. presidential election.

But Sondland says no one told him that hundreds of millions of dollars in security assistance to Ukraine were similarly contingent on satisfying Trump’s request for investigations. He said he simply presumed that was the case, based in part on the absence of any other credible explanation for the withholding of the aid.

In an interview with Time magazine this month, Zelenskiy also said there was no discussion of a quid pro quo, though he added that Trump should not have blocked military aid to Ukraine. Even so, Zelenskiy knew months before the call that much-needed U.S. military support might depend on whether he was willing to help Trump by investigating Democrats.

COLLINS, on Rep. Adam Schiff, the Democratic chairman of the Intelligence Committee: “He made up the factual call. ... He started the fairy tale we are having today.”

THE FACTS: Not so. The impeachment proceedings were sparked by a whistleblower’s complaint about Trump’s phone conversation with Ukraine’s president, not by Schiff’s account of that phone call.

Collins is exaggerating Schiff’s part in the episode and subscribing to Trump's botched timeline. The president repeatedly says Schiff invented an account of Trump's phone call with the Ukrainian leader, prompting the White House to release a rough transcript to prove him wrong.

Actually, the rough transcript came out first, confirming the whistleblower's description of Trump pressing Ukraine for political favors. That conversation is at the heart of the impeachment drive, now buttressed by witness testimony.

Schiff subsequently riffed off the rough transcript, giving an exaggerated performance of what Trump said on the call. He said his remarks reflected the "essence" of what he believed Trump was conveying to Zelenskiy, "shorn of its rambling character," and were meant as parody.

Trump routinely mocks critics and invents dialogue that he attributes to them; Schiff did similar in his remarks.