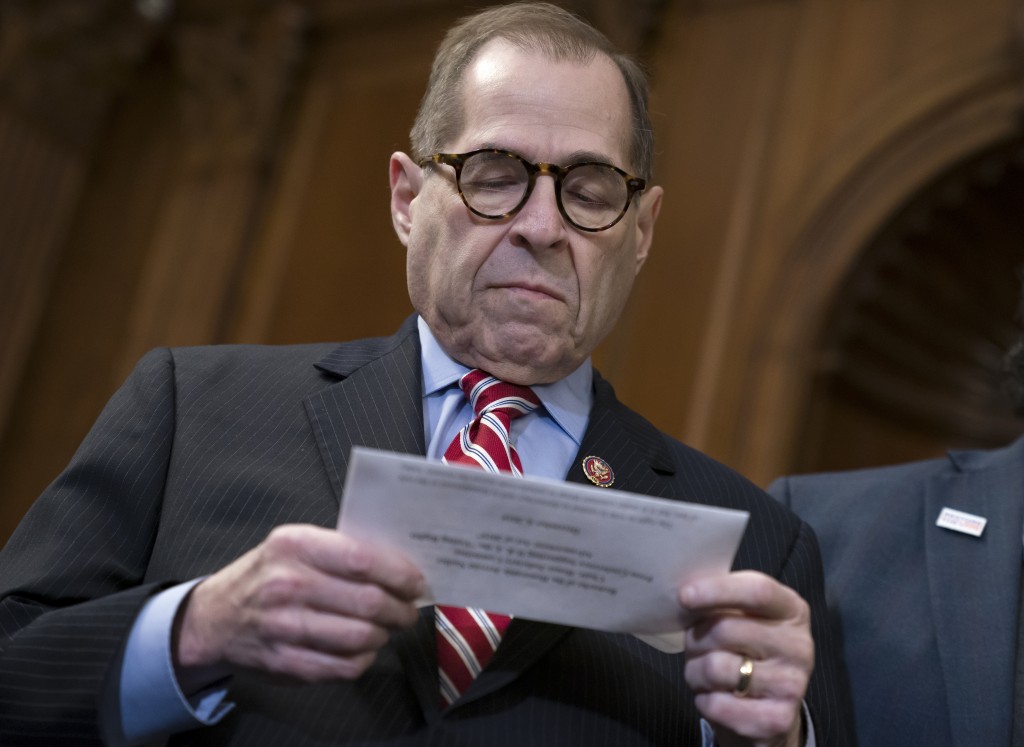 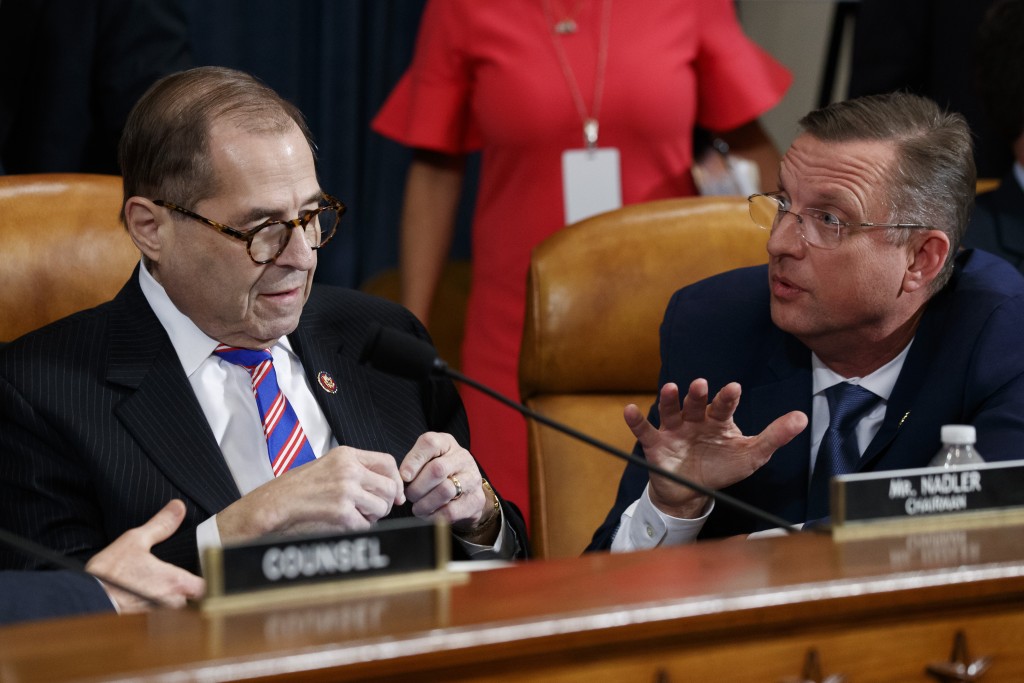 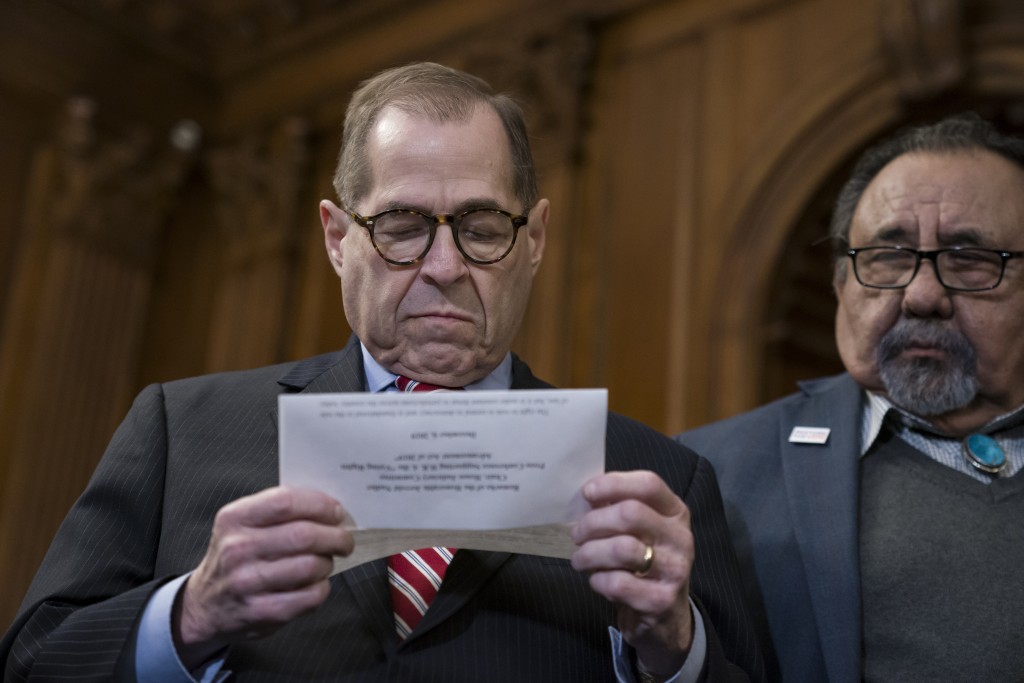 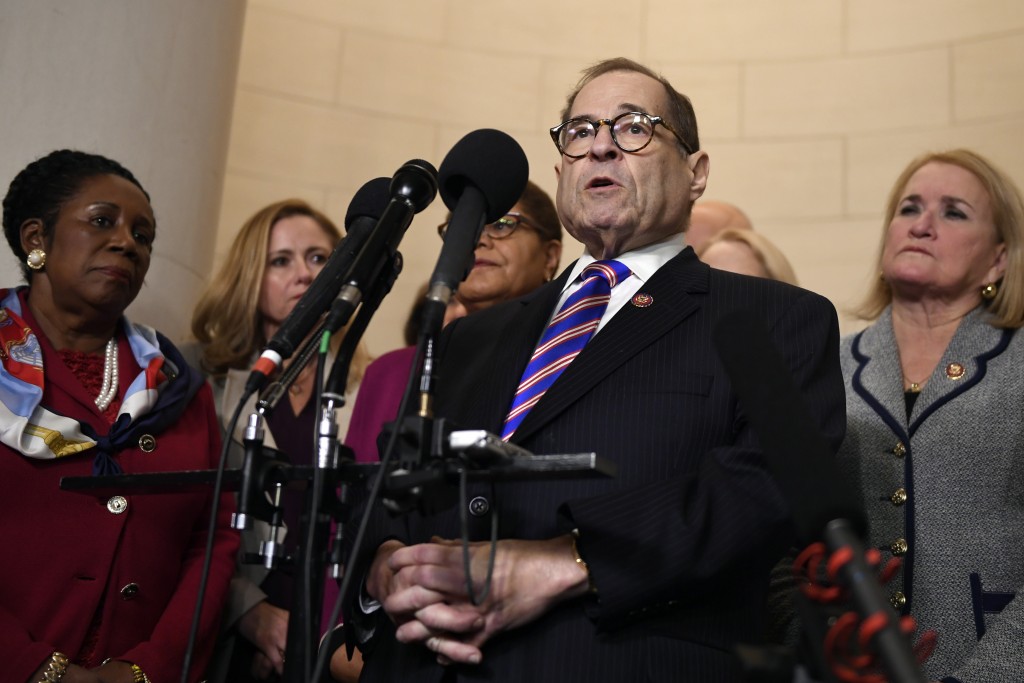 WASHINGTON (AP) — Pushing ahead with articles of impeachment, the House Judiciary Committee convenes Monday to formally receive the investigative findings against President Donald Trump as the White House and its allies launch an aggressive attack on Democrats and the proceedings.

Chairman Jerrold Nadler expects the committee to vote soon, possibly this week, on at least two or more charges against the Republican president. Democrats say Trump's push to have Ukraine investigate rival Joe Biden while at the same time withholding U.S. military aid ran counter to U.S. policy and benefited Russia. It could result in impeachment charges of abuse of power, bribery and obstruction.

“All this presents a pattern that poses a real and present danger to the integrity of the next election, which is one reason why we can't just wait for the next election to settle matters,” he said.

The hearing sets off a pivotal week as Democrats march toward a full House vote expected by Christmas. In drafting the articles of impeachment, Speaker Nancy Pelosi is facing a legal and political challenge of balancing the views of her majority while hitting the constitution's bar of "treason, bribery or other high crimes and misdemeanors."

Trump and his allies acknowledge he likely will be impeached in the Democratic-controlled House, but they also expect acquittal next year in the Senate, where Republicans have the majority. Trump's team is turning attention elsewhere, including Monday's release of a long-awaited Justice Department report into the 2016 Russia investigation.

The White House is refusing to participate in the process it calls a sham and the top Republican on the panel, Rep. Doug Collins of Georgia asked to postpone the hearing, criticizing Democrats for moving too swiftly. One legal scholar testified last week it would be the quickest impeachment in modern history.

“This is just how desperately they are -- desperately focused on impeaching this president,'' said Collins who said against Democrats unleashed thousands of pages of documents his side has no time to review before the session. ”This is a show. This is a farce. This is whatever you want to call it. The American people are having their tax dollars wasted on this impeachment of this president."

Trump is heading out for campaign rallies shifting attention away from the House. Over the weekend, Trump was focused on a related matter, the Justice Department Inspector General's findings into the FBI's decisions to investigate Russian interference in the 2016 election. The president has long called special counsel Robert Mueller's Russia probe a “witch hunt," but the Inspector General's report is expected to reject the president's claim that it was illegitimate, according to people familiar with its findings.

Trump tweeted Sunday, “I.G. report out tomorrow. That will be the big story!"

Democrats say Trump abused his power in the July 25 phone call when he asked Ukrainian President Volodymyr Zelenskiy for a favor in investigating Democrats and engaged in bribery by withholding nearly $400 million in military aide that Ukraine depends on to counter Russian aggression.

Trump and his aides have made clear that they now see his impeachment in the House as inevitable and have shifted their focus A vote to convict requires a two-thirds vote of the Senate, where Republicans hold 53 of 100 seats. It is unlikely that any Republican senators would cross party lines and vote to remove Trump from office.

As Democrats draft the articles, Pelosi's challenge will be to go broad enough to appease her liberal flank, which prefers a more robust accounting of Trump's actions reaching back to Mueller's findings, while keeping the charges more tailored to Ukraine as centrist lawmakers prefer. Democratic leaders will meet later Monday evening.

Rep. Adam Schiff, D-Calif., the chairman of the Intelligence Committee, said Democrats should approach the question of what to include in the articles the way a prosecutor bringing forward "'the strongest and most overwhelming evidence and not try to charge everything, even though you could charge other things.''

Schiff said, “I think we should focus on those issues that provide the greatest threat to the country. And the president is engaged in a course of conduct that threatens the integrity of the next election, threatens our national security.”

Monday's hearing is to receive the Intelligence panel's report on the inquiry, with lawyers from both parties testifying in what is expected to be a day long session that will lay the groundwork for the impeachment charges.

Nadler, in two television interviews, declined to say ultimately how many articles of impeachment Democrats will present but said they will involve “certainly abuse of power” and likely “obstruction of Congress.” He said final decisions will come after Monday’s hearing following discussions with House leadership and the Democratic caucus.

Nadler pointed to a “pattern” of conduct by Trump in seeking foreign interference in elections but would not commit to including the evidence of obstruction of justice in special counsel Robert Mueller’s Russia investigation as part of the articles of impeachment.

House Republican leader Kevin McCarthy criticized Democrats for their timeline, which he said was unfairly aimed at preventing the nation's voters from making their own choices in the 2020 election.

“If they do not impeach him, they cannot beat him at the polls,” McCarthy, R-Calif.

Trump said over the weekend that his personal attorney Rudy Giuliani wants to take the information gathered from Giuliani's investigations and a recent trip to Ukraine to the U.S. attorney general and to Congress. But a House GOP ally called Giuliani's trip “weird," coming as House investigators review allegations that Giuliani improperly worked on behalf of Trump to pressure Ukraine to pursue investigations into Biden and Biden's son, as well as a discredited conspiracy theory that Ukraine, not Russia, interfered in the 2016 U.S. election.

“It is weird that he's over there,” said Rep. Matt Gaetz, R-Fla., describing it as “odd having him over there at this time.”

Nadler spoke on NBC’s “Meet the Press” and CNN’s “State of the Union," McCarthy was on Fox News Channel's “Sunday Morning Futures,” Gaetz spoke on ABC's “This Week,” and Schiff appeared on CBS' “Face the Nation.”