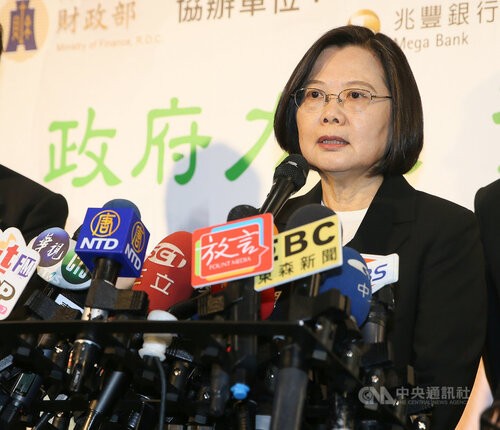 President Tsai Ing-wen (蔡英文) expressed hope Monday during a meeting with a high-level U.S. Department of Commerce official that Taiwan and the United States can sign a bilateral trade agreement to add new impetus to bilateral economic growth.

Tsai made the pitch during a meeting with Ian Steff, assistant secretary for global markets and director-general of the U.S. and Foreign Commercial Service at the U.S. Commerce Department, the Presidential Office said in a statement.

Tsai said Taiwan plays an indispensable role in the global high technology supply chain and that the global economy faces dramatic changes due to the trade friction between the U.S. and China.

She expressed hope that a Taiwan-U.S. trade pact can be signed to help boost economic growth and prosperity in the two countries, according to the statement.

Noting this is the second time within a year that she has met Steff in Taiwan, Tsai said she heard that during his two-year tenure at the Department of Commerce, Taiwan has been the country he has visited the most among any trade partners of the U.S., according to the statement.

The letter was also signed by David Stilwell, assistant secretary of state for the Bureau of East Asian and Pacific Affairs, and Ken Isley, administrator of the Department of Agriculture's Foreign Agricultural Service.

The U.S. government's cross-agency support is the best example that Taiwan-U.S. economic relations are at their best, according to Tsai.

Taiwan is not only a staunch democratic ally of the U.S. but also a reliable trade partner, Tsai went on, adding that Taiwan's free and open market has encouraged major U.S. companies to invest in the country. For instance, Cisco, Google, Microsoft and Amazon Web Services have set up research, development and innovation centers in Taiwan,

She said Steff will participate in the third Taiwan-U.S. Digital Economy Forum to discuss opportunities and challenges in the digital era.

Steff is on a five-day visit to Taiwan to discuss economic, trade, and investment issues, Taiwan's Ministry of Foreign Affairs (MOFA) said Monday in a statement.

While in Taiwan, Steff will visit government agencies and business leaders to exchange views on bilateral economic issues and cooperation on information security, according to MOFA.

He will also meet with private sector representatives to discuss trade and investment, according to the American Institute in Taiwan.