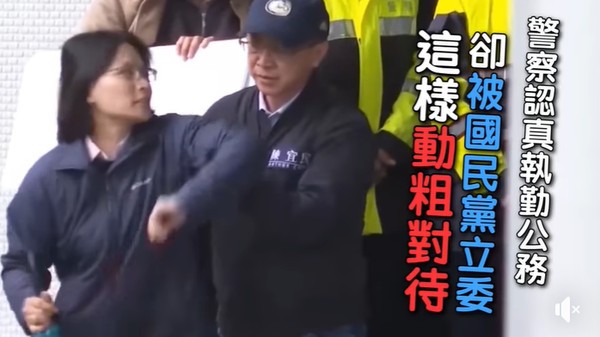 TAIPEI (Taiwan News) — Kuomintang (KMT) lawmaker Chen Yi-min (陳宜民) apologized on Saturday (Dec. 7) for shoving a female police officer on Friday (Dec. 6) — but the official KMT response to the incident has stirred further controversy by referring to her as a "strange auntie."

On Friday a large group of KMT lawmakers swarmed outside the Ministry of Foreign Affairs (MOFA) and tried to get past security officers. The KMT party members claimed they wanted to speak with MOFA chief Joseph Wu (吳釗燮) directly about the death of Su Chii-cherng (蘇啟誠), late director-general of the Osaka branch of the Taipei Economic and Cultural Office in Japan.

Police on the scene refused to allow them entry, so KMT lawmakers tried to force their way in. During the ensuing scuffle with police, Chen spotted an unknown woman dressed in plain clothes and baseball cap and taking photos of them with a mobile phone.

In his apology posted on Facebook on Saturday, Chen wrote that he asked the woman which unit she belonged to and if she could present see some form of identification. He claims he then asked her to leave and to stop filming.

Chen says she refused to budge and did not say a word, so he waved his hands while speaking to her and accidentally knocked off her hat. He said he then "patted her shoulder" to ask her to leave and "in the process, there was some pushing and emotions. For this I would like to say to her that I am very sorry."

However, in video footage of the incident, the woman can clearly be heard saying she is from the Special Police Sixth Headquarters. Yet, Chen continues to repeat the question, "Which unit are you? Which unit?"

He then says "What are you? Get out!" He then proceeds to violently shove the police officer causing her to fall down three steps.

On Monday (Dec. 9), the KMT issued a statement to apologize for the incident also trying to justify Chen's actions. In the statement, Kuomintang (KMT) deputy spokesman Huang Hsin-hua (黃心華) said the woman was not wearing a police uniform and wore a baseball cap.

Huang said that Chen thought the woman was a passerby or a "strange auntie" who was being overly obtrusive by constantly taking photos with her phone. In the heat of the moment, Chen became agitated and "used his body movement to drive the woman away from his personal space," reported ETtoday.

"So you can shove people who don't show their identity?"

"So if the person is just a passerby, you can shove them at will?"

"It's obvious that a beautiful young policewoman has been discredited as a 'strange auntie.' You [KMT] have no lower limit for your bullying."

Others questioned whether a "strange auntie" or "passerby" could simply enter the MOFA building at will.