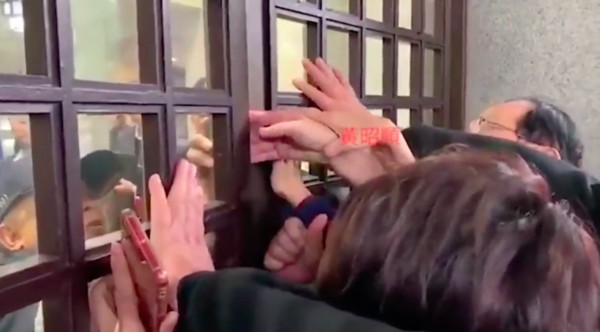 On Friday a large group of KMT lawmakers swarmed outside the Ministry of Foreign Affairs (MOFA) and tried to force themselves past past security officers. The KMT party members claimed they wanted to speak with MOFA chief Joseph Wu (吳釗燮) directly about the death of Su Chii-cherng (蘇啟誠), late director-general of the Osaka branch of the Taipei Economic and Cultural Office in Japan.

On Monday (Dec. 2), the Taipei District Prosecutor's Office announced that it is formally charging the pro-Democratic Progressive Party (DPP) "Green Camp Internet Army" leader Slow Yang (楊蕙如) and online troll Tsai Fu-ming (蔡福明) with spreading fake news about the Osaka office's handling of the disaster, ultimately compelling its director to commit suicide. After the news broke, a couple dozen KMT politicians mobbed the front door of the ministry's building demanding they be allowed to enter to hear Wu's explanation about Su's death.

Police on the scene refused to allow them entry, so KMT lawmakers tried to force their way in. In the ensuing scuffle with police, KMT leaders claim that Chen Yu-jen (陳玉珍) and fellow KMT lawmaker Lin Yi-hua (林奕華) suffered injuries that required hospitalization at National Taiwan University Hospital.

Chen claimed that she suffered hypoxia after being crammed into a tight space for an hour and sustained a contusion to her right hand after it was trapped in the doorway. Lee Ming-hsien (李明賢), director of the KMT's Culture and Communications Committee, alleged it was the police that slammed the door on Chen's right hand, reported CNA. However in a photo Han took with Chen in the hospital, the KMT presidential candidate can be seen holding Chen's right hand, the one that was supposedly injured, while the ECG machine in the background has flat-lined. Many political pundits mocked the scene as pure theater.

The medical community also criticized the KMT for wasting resources on a political stunt. Shih Chung-chih (石崇志), an anesthesiologist at National Taiwan University Hospital Department of Emergency Medicine said the emergency room should only be used for those in serious medical need, not for political posturing, reported ETtoday. On Saturday, Democratic Progressive Party (DPP) lawmaker Wang Ting-yu (王定宇) released a video on his Facebook page with a caption that reads, "How did you get your hand caught in the door? After watching the video, I can't help but laugh." In the video, KMT lawmaker Huang Chao-shun (黃昭順) can clearly be seen holding Chen's wrist, guiding it into the gap in the doorway, and pressing on it with her right hand as she films it being "jammed" while holding her smartphone in her left hand.