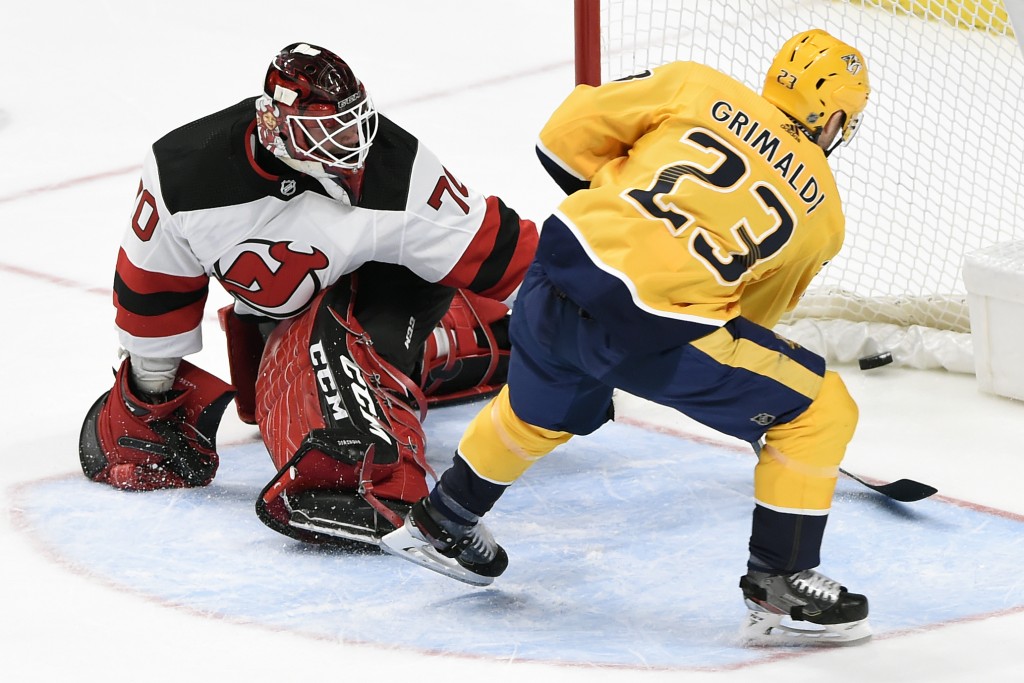 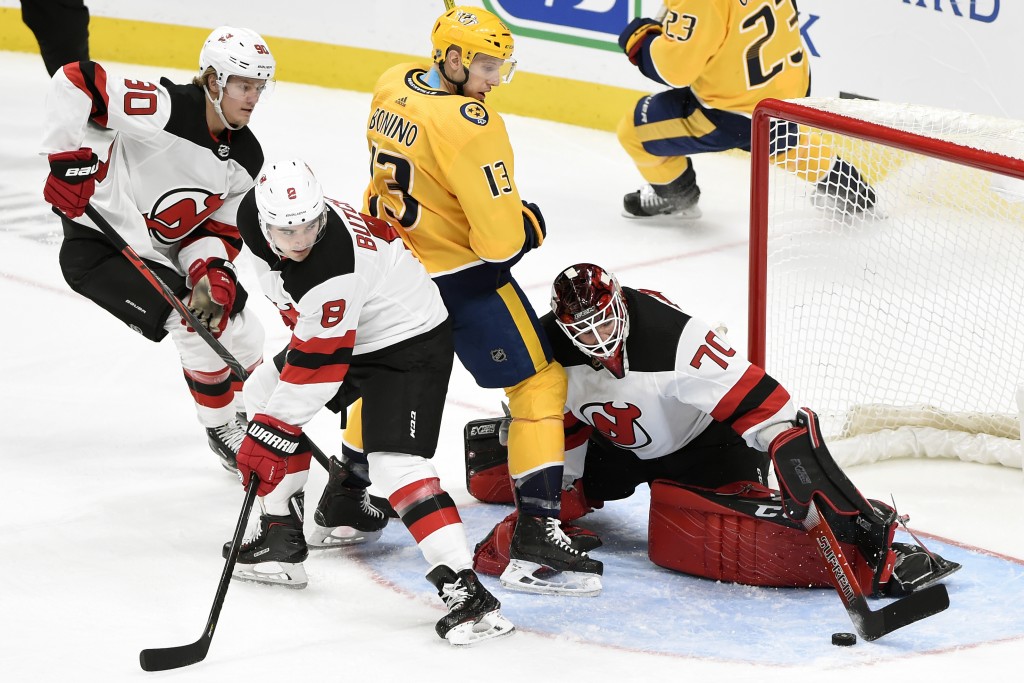 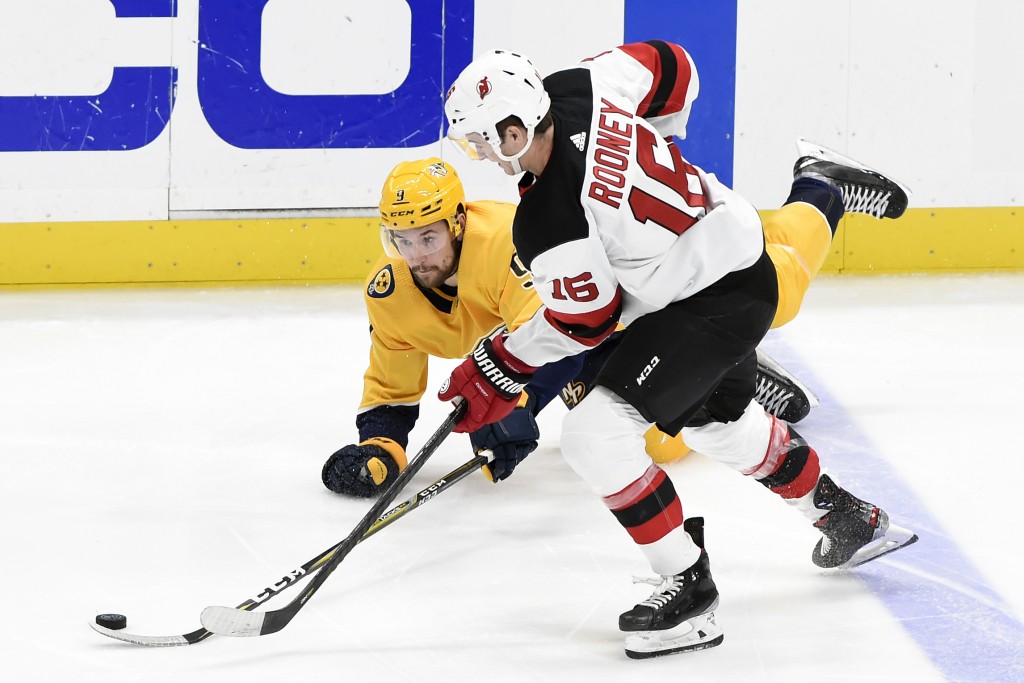 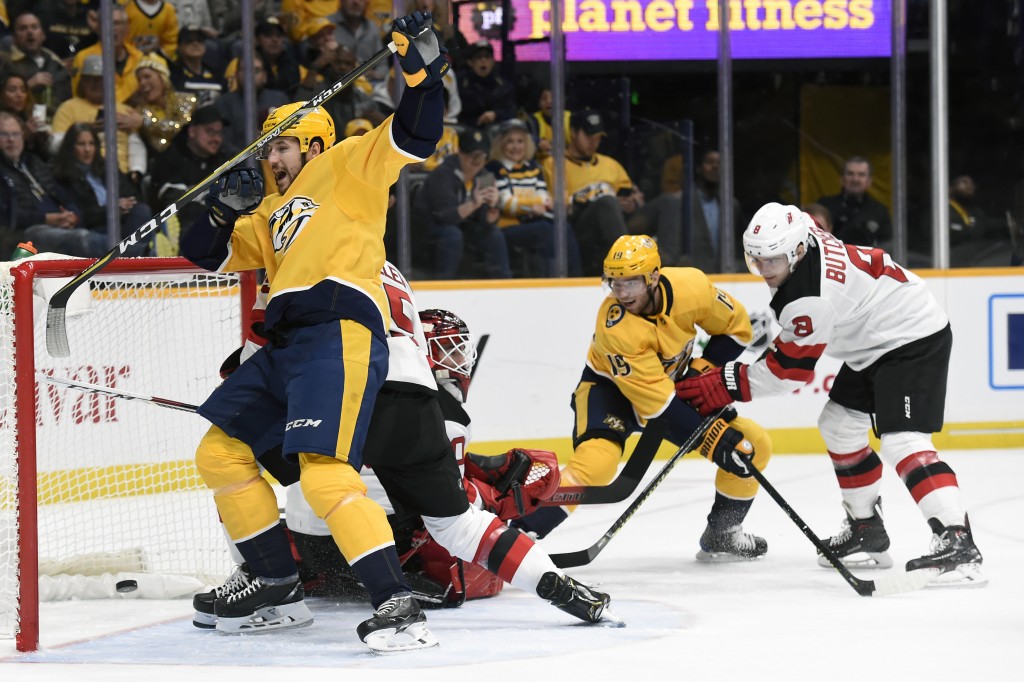 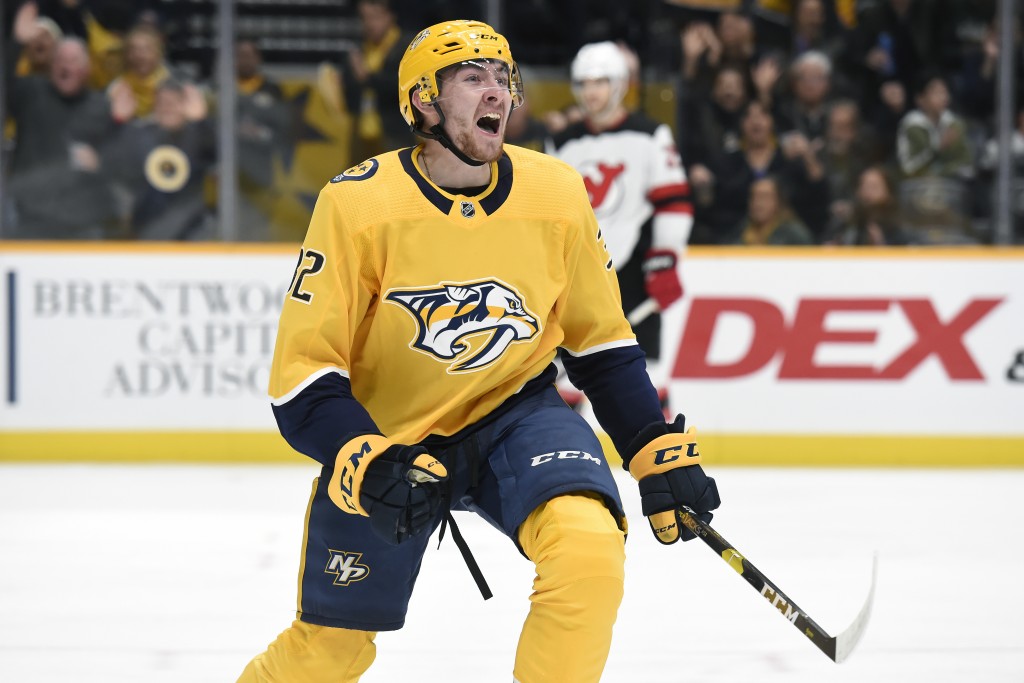 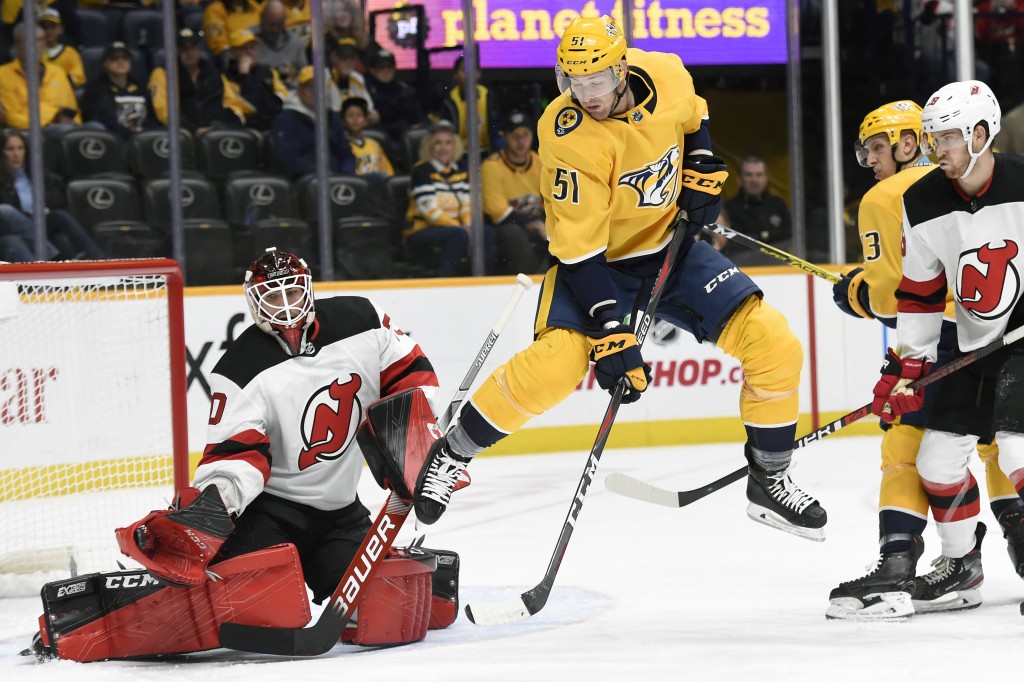 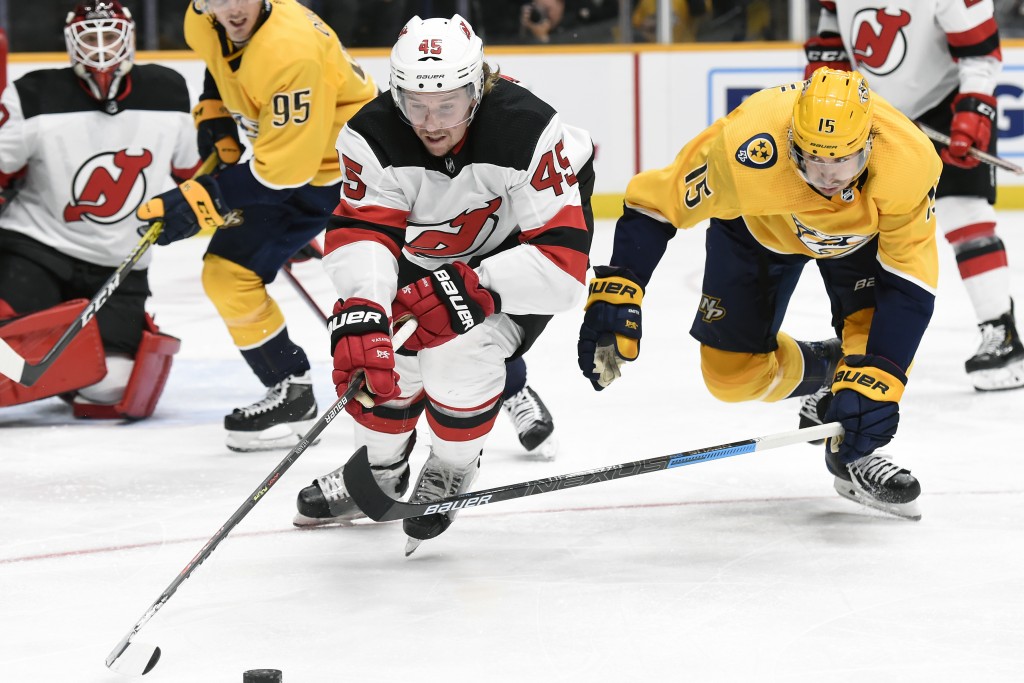 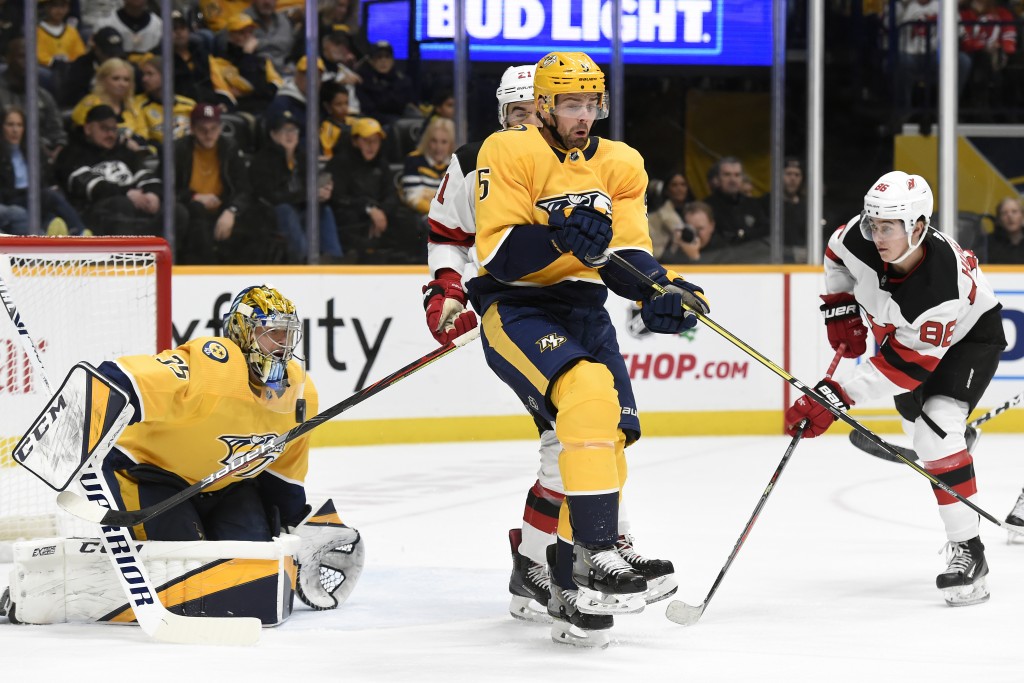 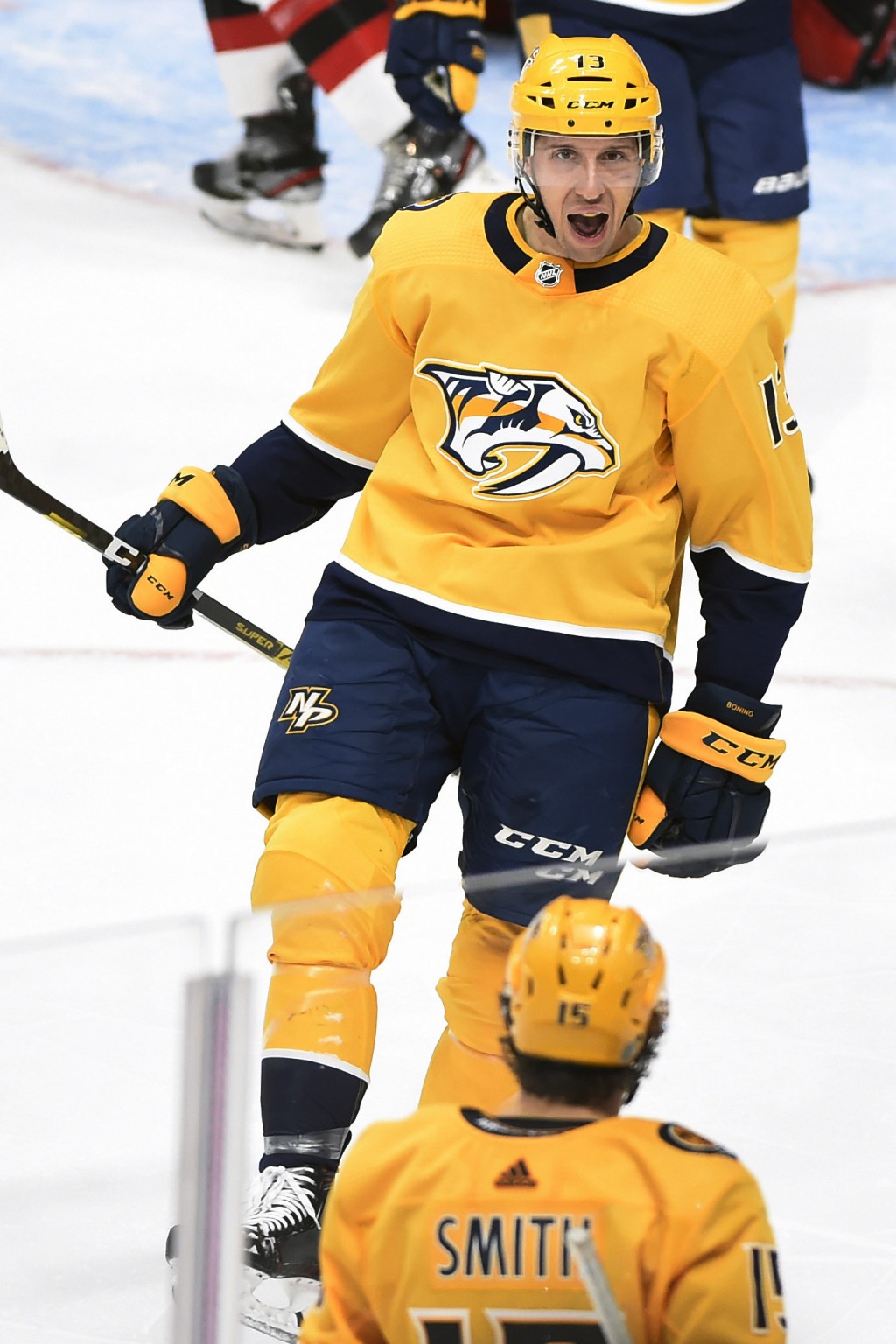 NASHVILLE, Tenn. (AP) — Nick Bonino, Dante Fabbro and Rocco Grimaldi each had a goal and an assist, and the Nashville Predators beat the New Jersey Devils 6-4 on Saturday night.

Playing in his second career NHL game, Trenin gave the Predators the lead for good as he notched his first goal with his skate.

Grimaldi took advantage of a New Jersey turnover and fired a slap shot toward the Devils' net from the right circle. The puck glanced off of Trenin’s skate and squeezed between Domingue's pads at 5:52 of the second to put Nashville up 3-2.

Forsberg got his 11th at 7:24 of the middle period to make it 4-2, before Palmieri pulled the Devils back within one with his 11th less than six minutes later.

Bonino restored the Predators' two-goal lead at 5:47 of the third with his 11th.

Hall got the Devils within one again with just under nine minutes remaining, but Grimaldi sealed the win 95 seconds later.

The teams started the scoring early, combining for four goals before the game was even four minutes old.

The well-rested Predators jumped out to a 2-0 lead quickly on goals by Carr and Fabbro. The Predators hadn’t played since Tuesday while the Devils fell at home to Chicago in a shootout Friday night.

Carr’s came just 46 seconds in as he redirected Dan Hamhuis' shot past Domingue. It was the first of the season for Carr, who has split time between Nashville and Milwaukee of the AHL since signing with the Predators on July 1.

Fabbro doubled the lead at 2:13 with his third.

The Devils answered back with two quick ones of their own, first by Bratt at 2:45 and then Zajac 1:14 later.

The Predators played a video tribute for Devils defenseman P.K. Subban during a first period timeout. Subban, who played the previous three seasons in Nashville, received a standing ovation from the Bridgestone Arena crowd and he stood and waved to the fans.

Notes: Trenin, called up from Milwaukee of the AHL on Friday, is the 184th player in Predators franchise history to score a goal. ... Predators C Mikael Granlund missed his second consecutive game due to a lower-body injury. ... Bratt has two goals in his last three games. ... Domingue is 3-2-1 in his career against Nashville. ... Devils D Sami Vatanen had two assists.