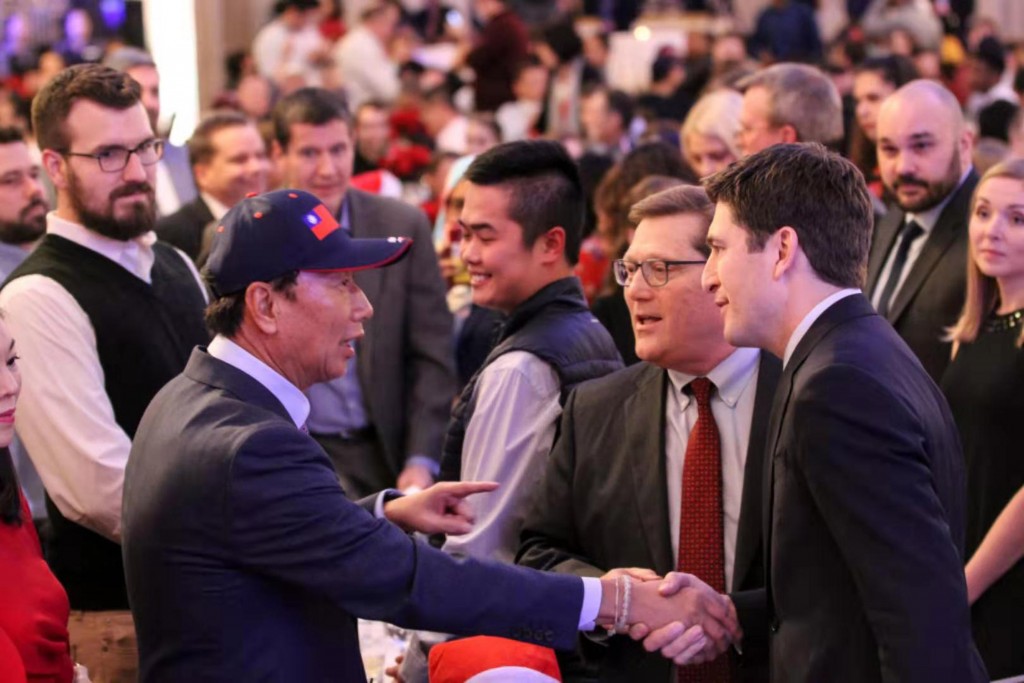 Terry Gou, founder of Taiwanese manufacturing giant Hon Hai Precision Industry Co., on Friday visited the site of a huge investment project being carried out by the company in Wisconsin, United States.

The complex, spread over almost 1 million square feet, will manufacture flat screens when it is completed in May 2020, according to the company, which is also known as Foxconn.

"We have achieved a great deal over the past year, and it is due in great part to the hard work of hundreds of Foxconn Wisconsin employees and the many partners who are supporting the construction of the new facilities," Gou said in a statement on his visit to the site.

"Wisconsin is Foxconn's North American home," said Gou, who went to the project site the day after he attended a Christmas party at the White House, where he talked with U.S. President Donald Trump about the Wisconsin plant, the U.S.economy as well as trade friction between Washington and Beijing.

In Wisconsin, Gou also met with several Hon Hai employees there and community leaders in the city of Milwaukee and the township of Mount Pleasant, where his company has investments.

In 2017, Hon Hai signed an agreement with Wisconsin Economic Development Corp. (WEDC) to build a flat screen manufacturing park in the state and it received a package of potential subsidies and tax breaks worth over US$3 billion, based on the promise of creating 13,000 jobs over six years.

However, Wisconsin Governor Tony Evers has expressed doubts that Hon Hai would create 13,000 jobs as promised and suggested revisiting the agreement on the incentives.

In May, Gou met with Trump and reaffirmed the company's commitment to the Wisconsin project, saying the sophisticated flat panel complex would be completed on schedule in May 2020.

After Gou's visit to the project Friday, he said the company has invested about US$350 million in the Area 1 development within the Wisconn Valley Science and Technology Park (WVSTP), with contracts awarded to dozens of Wisconsin companies over the past year.
"Next year is projected to be even more significant as we bring facilities at the Wisconn Valley Science and Technology Park on stream," Gou said.

Hon Hai has said it will give priority to Wisconsin residents in its recruitment of talent in areas such as artificial intelligence, robotics, cloud-based computing, industrial AI, 5G communications and the Internet of Things.

The Wisconsin plant is expected to start mass production in the fourth quarter of next year, targeting markets for high definition 8K TV panels and automotive displays, according to Louis Woo (胡國輝), a top aide to Gou.

Part of the project is an incubation center to help high-tech startups develop artificial intelligence and integrate AI with 8K screen production and a 5G ecosystem, Woo said.

During Gou's visit to the White House Thursday, he held discussions with White House high tech investment advisors for about two and a half hours, he said, but declined to disclose any details of the discussions.

Gou stepped down as the chairman of Hon Hai in June after announcing that he planned to run for president on the opposition Kuomintang (KMT) ticket, but he lost the presidential primary to Kaohsiung Mayor Han Kou-yu (韓國瑜) in July.

Under his successor at Hon Hai Liu Young-way (劉揚偉), the company's bottom line has remained healthy.

In the third quarter of the year, Hon Hai reported net profit of NT$30.66 billion (US$1.01 billion), up 80 percent from NT$17.05 billion in the second quarter and 23 percent from a year earlier. (By Chung Jung-feng and Frances Huang)