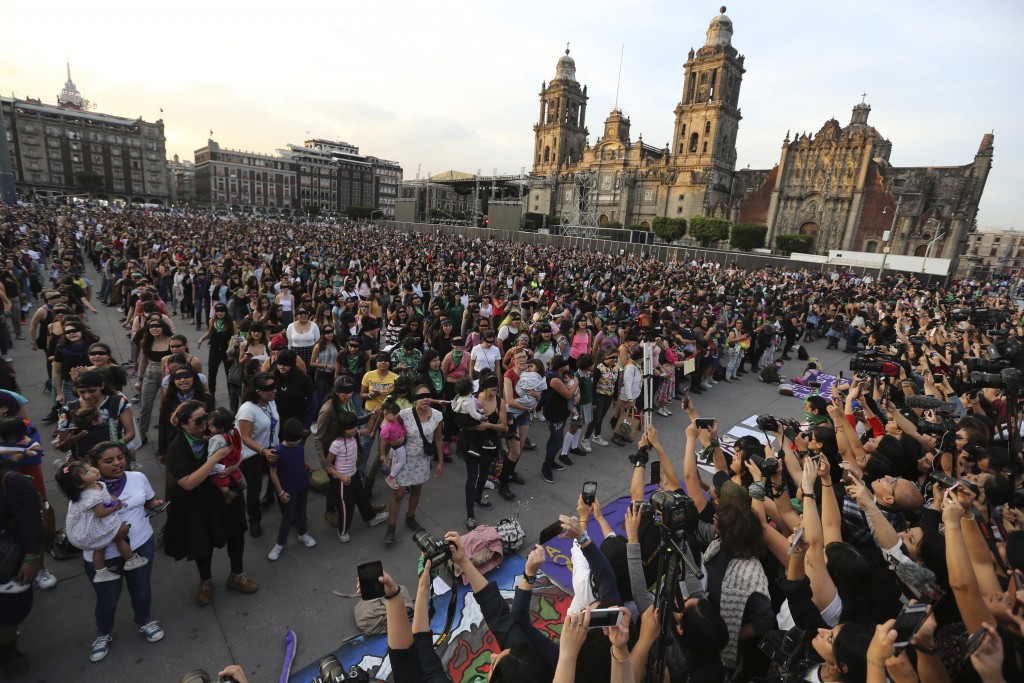 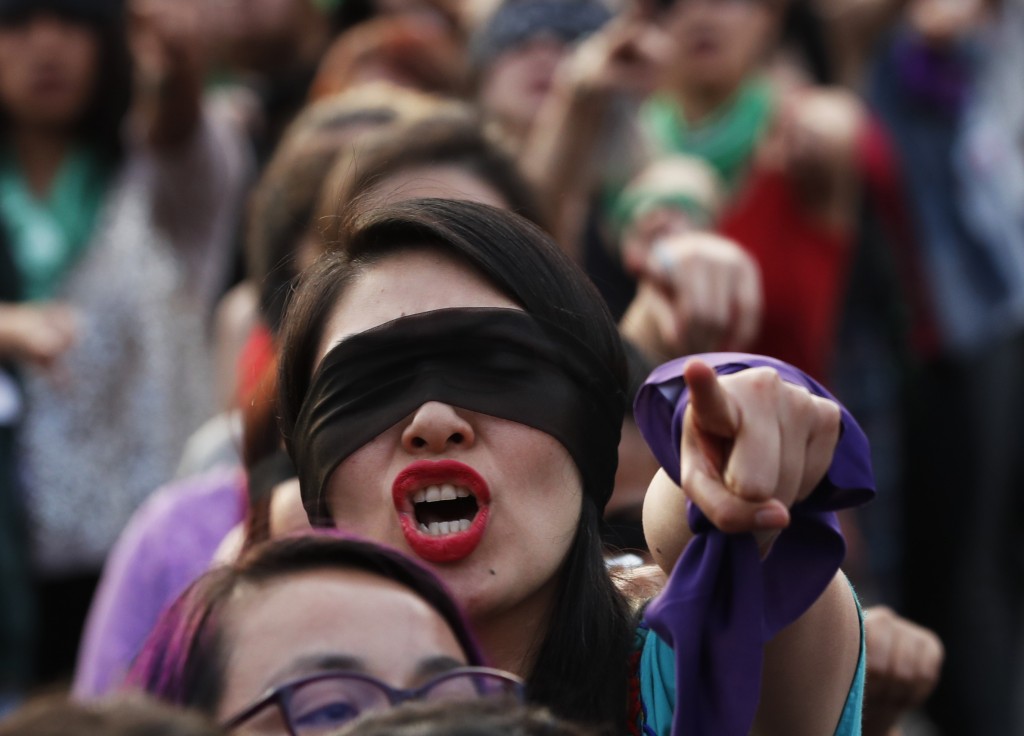 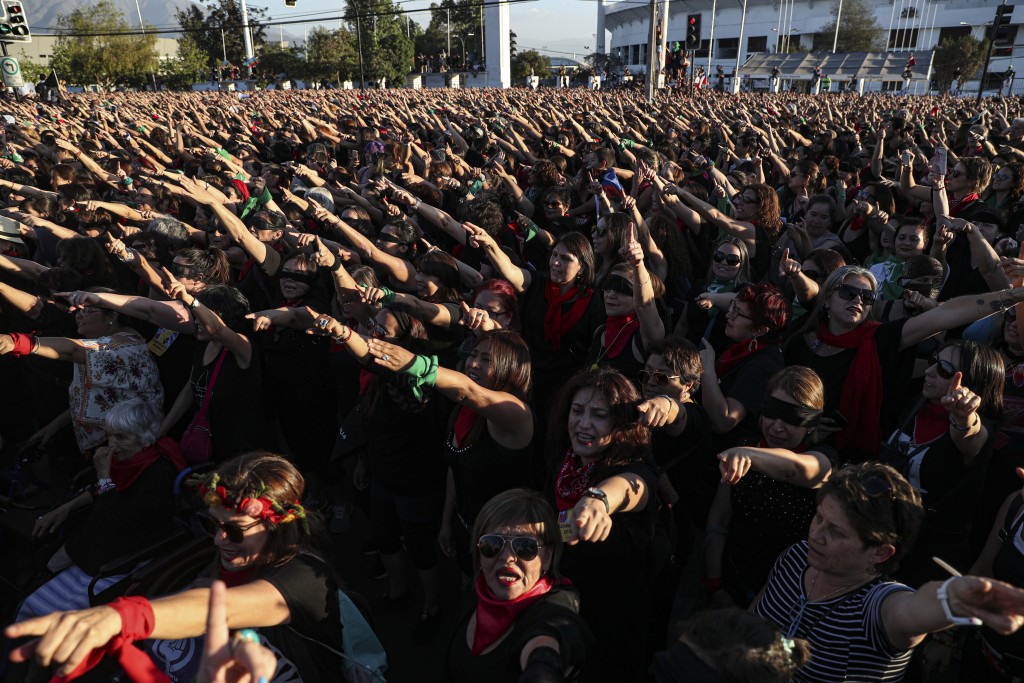 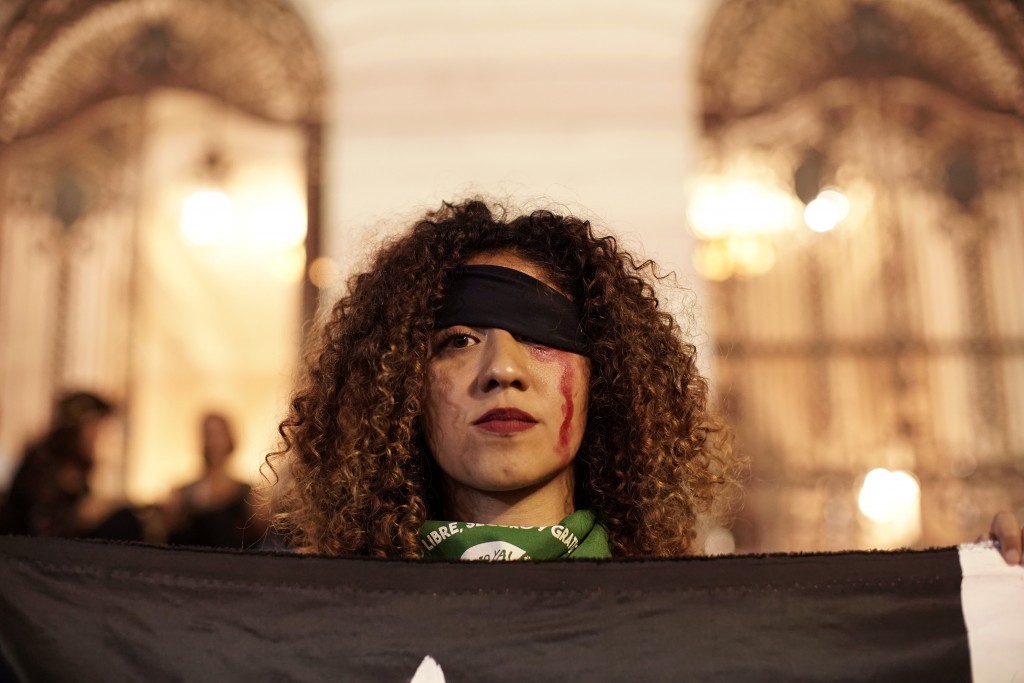 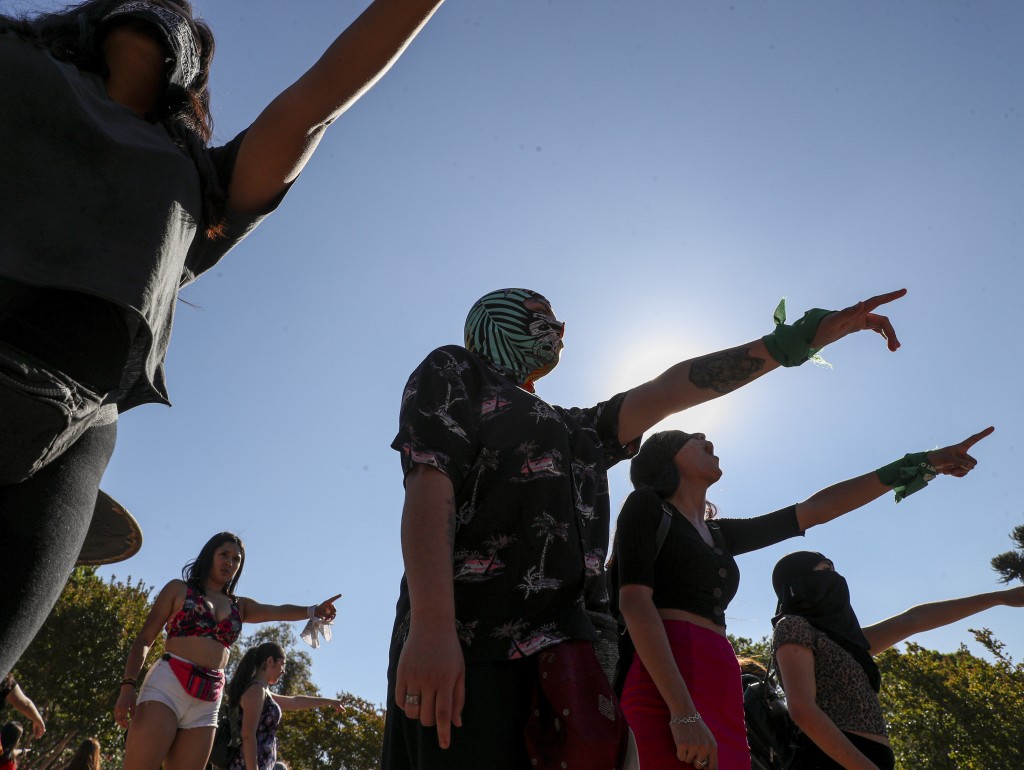 MEXICO CITY (AP) — Born in Chile, the feminist anthem “A Rapist in Your Path” has become an international phenomenon, with activists in countries from Latin America to the U.S. and Europe staging public performance to denounce violence and human rights abuses against women.

Almost as quickly, it has spawned a series of videos of Mexican men and male teens appearing to mock the anthem — sparking criticism in social and traditional media and among women's activists and allies.

Thousands of women wearing blindfolds and bandannas replicated the performance Nov. 29 in Mexico City’s sprawling main square, known as the Zocalo, and it has spread as well to other parts of the country as well.

So the videos that surfaced this week were seen by many as macho, disrespectful or at best tone-deaf in a country where killings of women are a rising phenomenon that go largely unpunished.

The first to emerge involved the under-17 team of Mexico City soccer club America. A handful of players in a locker room, three of them shirtless, are shown laughing and dancing to the catchy chant, which translates as: "And the fault was not mine, neither where I was, nor how I was dressed,” and, “The rapist is you.”

In the second video, two men who are apparently Mexican marines gyrate and swivel their hips to a recording of the chant in what looks to be a military barracks. If the first was ascribed by some to youthful naivete, the latter was troubling given that Mexican soldiers and other security forces have repeatedly been implicated in human rights abuses including torture and rape.

Perhaps the most controversial was the third, shared on Instagram by frontman MC Babo of the prominent hip-hop group Cartel de Santa, which is based in a suburb of the northern city of Monterrey and was once nominated for a Latin Grammy.

In the video, a mashup of three scenes from existing music videos by the group is set to the sound of male voices singing the anthem while women in plunging-neckline costumes dance suggestively. Babo is shown lounging with other scantily clad women and a group of masked men surround a frightened woman whose hands are tied.

Maynné Alexa Cortés, a 26-year-old feminist psychologist said the videos show “not a single ounce of empathy” and that violence against women is “made invisible” among many men.

“They do not understand what is going on,” Cortés added.

Amid the criticism, officials scrambled to do damage control.

Club America announced it would investigate and pursue disciplinary measures, and later said that its youth teams would take an awareness course covering violence against women, machismo and social media best practices.

“We are cooperating and attentive to whatever the Disciplinary Commission of the Mexican Soccer Federation may decide,” the team said in a statement.

The Department of the Navy said it was also investigating to determine the identity of the two men, who it called “presumed members” and sought to distance itself from their actions, saying they do not reflect the branch’s “institutional posture.”

Cartel de Santa’s Babo said in a reply to an Instagram comment that he did not create the video he shared, but that it had been sent to him via WhatsApp. He didn't explain why he had then shared it, however.

It’s not his first scandal: A decade ago he served a reported nine months in prison after killing a bandmate in a shooting he said was an accidental ricochet.

The videos came amid a flurry of reports of disappeared or murdered women and following months of feminist protests denouncing gender violence, as well as several cases of alleged rapes by police officers. Demonstrators demanded government measures to prevent such crimes as well as justice for the 10 women killed daily on average nationwide. Only one in 10 such crimes are solved, according to the National Citizens’ Observatory on Femicide.

The federal government has said it has “zero tolerance” for gender violence, and Mexico City Mayor Claudia Sheinbaum last month declared a gender violence alert, making it the 20th of Mexico’s 32 federal entities to do so. Women’s groups consider such declarations, which activate measures to address the problem, important, but say they can work only if followed through with action and have yet to yield results so far.

Cortés said the sight of hundreds or thousands of women performing the anthem is a “titanic achievement” because women have historically been marginalized from public spaces.

“When they to go out to sing, ‘The rapist is you,’ it is not just about the singing. It is that in that group (of protesters) there are many women who are victims of violence with a very deep trauma,” she said. “Recognizing that that violence ... is not women’s fault is something impressive, extremely powerful.”