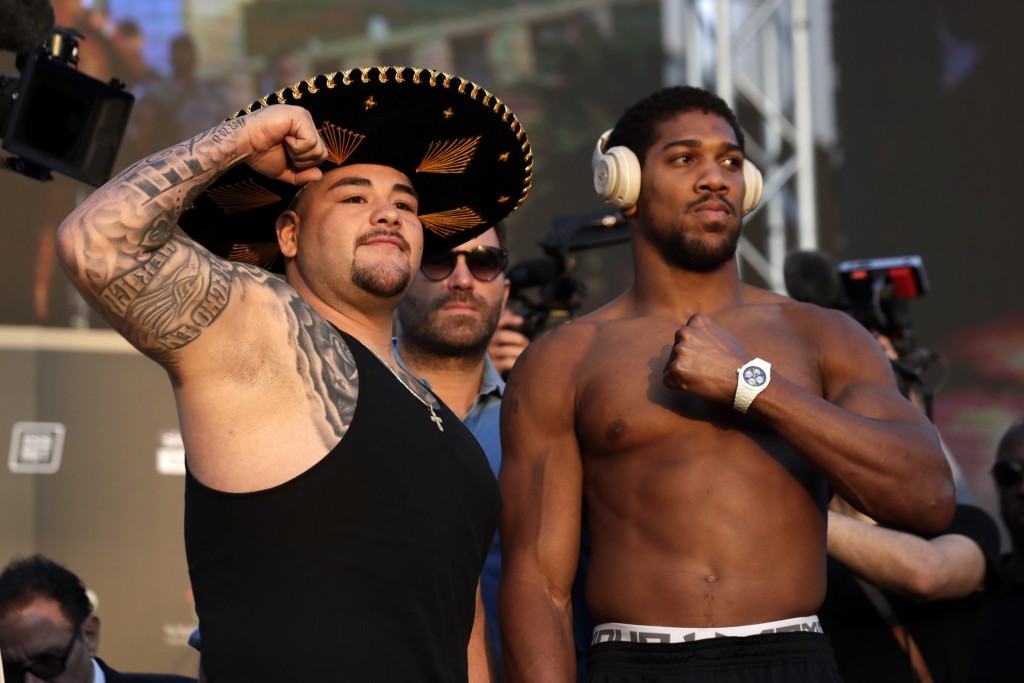 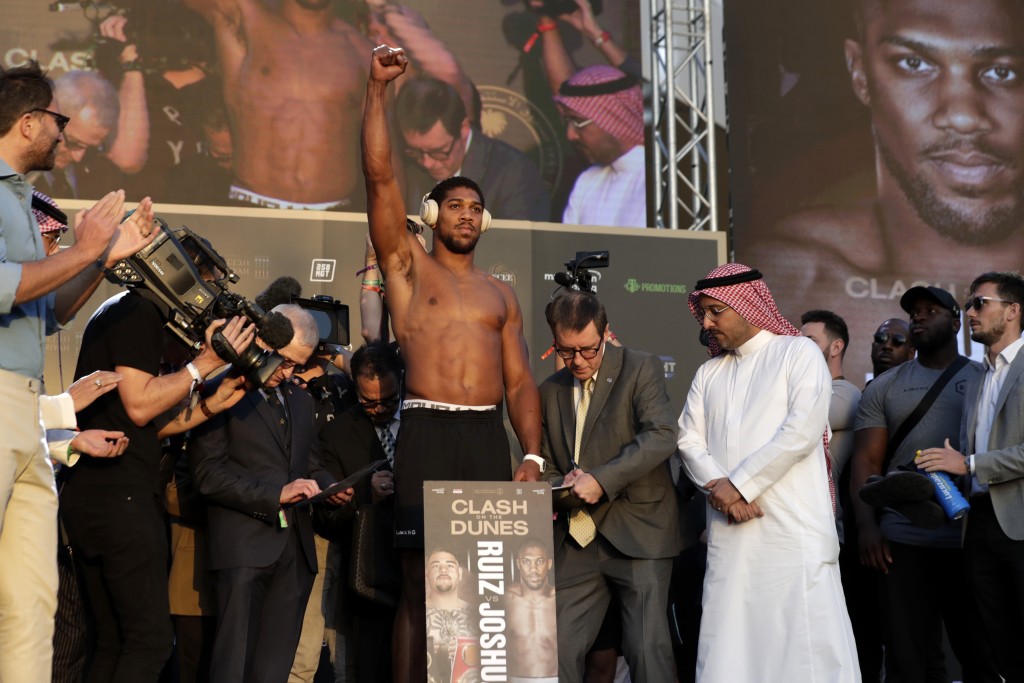 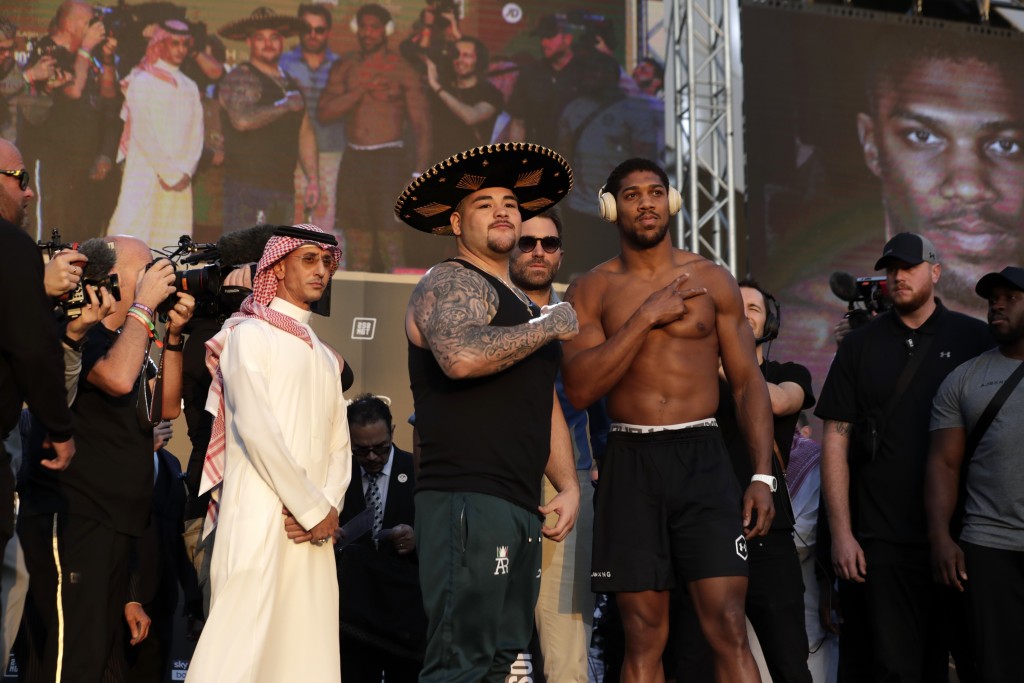 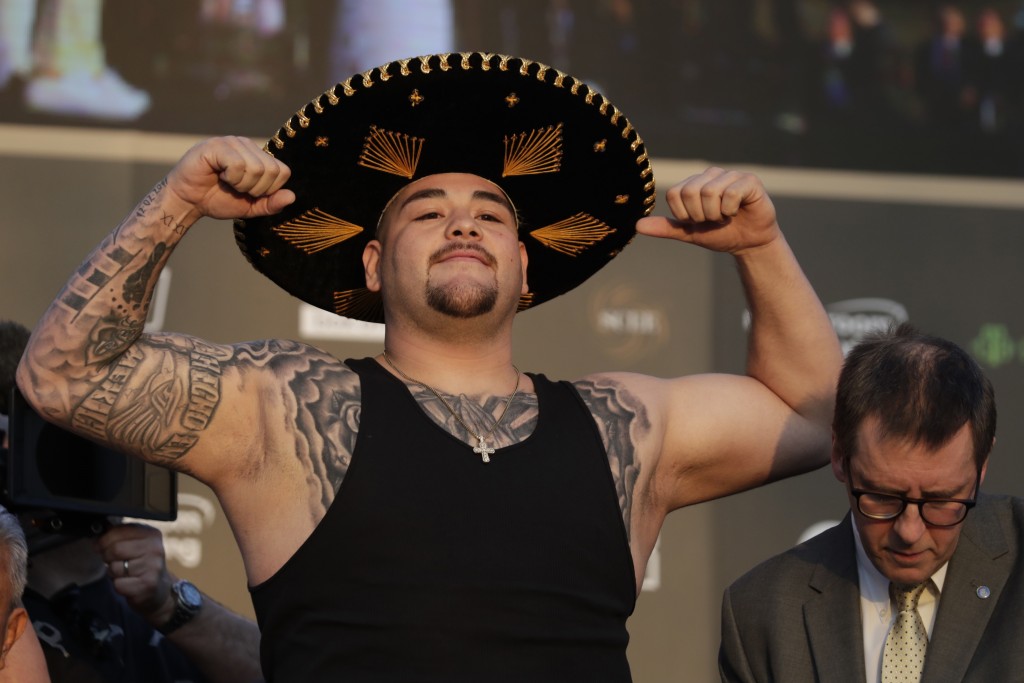 RIYADH, Saudi Arabia (AP) — In one part of Riyadh, two of the world’s most high-profile boxers squared off at a weigh-in outside a 5-star hotel ahead of the first heavyweight title fight to take place in the Middle East.

Across town, American rappers Akon and Chris Brown were about to headline a concert at a UNESCO heritage site.

“A journey of transformation,” the kingdom’s government-backed General Sports Authority calls this push to portray a new image of modernization and to boost tourism.

Concerns swirl, however, over whether there is another backdrop to this movement.

Anthony Joshua, the British fighter seeking to reclaim three heavyweight titles from Mexican-American champion Andy Ruiz Jr. in their rematch in Saudi Arabia this weekend, hasn’t just been fielding questions about Saturday's bout. He’s also faced scrutiny over whether he is being used by the Saudis in a bid to “sportswash” their reputation.

“All I’m here to do is box," Joshua told The Associated Press this week when asked if he had any concerns about fighting in the kingdom despite its questionable human-rights record. "So away we go. We are here now. I’m comfortable.”

Reportedly pocketing $70 million for being here, Joshua was unlikely to say anything else.

“It’s a massive opportunity,” he told the AP. “Boxers need opportunities. Every sport and every business needs global opportunity. It ticks a box for business, but also tourists and sports.”

The “sportswashing” theory, as put forward by human rights organization Amnesty International, among others, was also put to Joshua’s promoter this week.

“I was driving up and down the road last night, thinking of all the criticism I’ve been getting. And I passed Gucci, Starbucks, Dunkin’ Donuts, Versace and Ralph Lauren,” Eddie Hearn said. “The Saudis want to show they are changing. And they want a more positive image worldwide by bringing in events. But isn’t that what they should be doing?

"They have got to change, and they are changing. But the great news is that boxing is going to be responsible for those changes — and that shows you the power of sport.”

The “sportswashing thing,” Hearn said, was “over my head.”

Amnesty said in an email to the AP that it wasn’t necessarily asking Joshua to boycott the fight, thereby forfeiting the biggest payday of his career, but rather that he “inform himself of the human rights situation in Saudi Arabia and be ready to speak out.”

It’s something Joshua has chosen not to do.

There was a huge international outcry following the brutal killing of Washington Post columnist Jamal Khashoggi at the Saudi consulate in Istanbul last year. Saudi Arabia denied any involvement by the crown prince but its own investigation acknowledged the operation was planned by two of his top aides.

There are strict limits on expression in the country. Women’s rights activists and others have been targeted for arrest in the lead-up to women being allowed to drive for the first time last year. Prince Mohammed oversaw what was described as an anti-corruption roundup in 2017 that saw Riyadh’s Ritz-Carlton Hotel turn into a detention facility, and princes, government officials and others detained. The roundup helped solidify Prince Mohammed’s power.

Meanwhile, Saudi Arabia remains mired in a years-long war in neighboring Yemen, the Arab world’s poorest nation, that has killed more than 100,000 people and seen the kingdom criticized for airstrikes targeting civilian areas.

Amnesty said it recorded 146 executions in Saudi Arabia last year, the third highest in the world — behind only China and then Iran. The executions are held in public.

There is, therefore, a concerted effort to normalize the regime, while using increased spending on sports and entertainment to promote it and advance Saudi’s “Vision 2030” — a blueprint to wean the kingdom off its reliance on oil as prices lower.

Amid a month-long set of events called “Diriyah Season” that started Nov. 22, the Ruiz-Joshua rematch is the headliner. It started with a Formula E race last month, and will continue after the boxing with the Diriyah Tennis Cup — an eight-man tournament including Stan Wawrinka and Daniil Medvedev — and then the Diriyah Equestrian Festival. International recording artists have performed throughout the month.

Tourist e-visas to the kingdom were issued for the first time last year — a one-year, multiple-entry visa that allows people from 49 different countries to spend up to 90 days in Saudi Arabia.

"Our arms are open and our welcome has never been warmer."

Certainly there has been change, with the crown prince regarded as the driving force behind loosening restrictions on women, who were allowed in sports stadiums for the first time last year to watch a soccer match. A national women’s soccer team was created this year. A big step had already been made seven years ago when Saudi Arabia sent women to the Olympics for the first time.

Nevertheless, women are still segregated and most cover their faces and hair with black veils and wear loose-flowing black robes.

Hearn said he expects there to be “loads of women” at the fight on Saturday. And he is quite confident that Ruiz-Joshua will not be the last mega-fight seen in the kingdom in the coming years.

“They can’t believe they got this (fight) and it is nearly here,” Hearn said, “and they are saying, ‘What’s next?’”