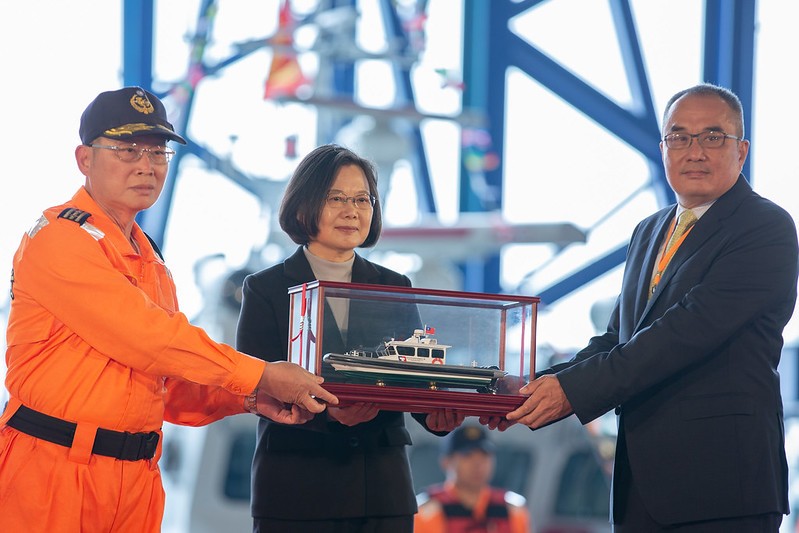 The four vessels include one 600-ton cutter (CG 601), two 35-ton patrol boats (PP-3682), and one coastal multi-purpose boat. Their launch marked the initial success of a 10-year Coast Guard Administration (CGA) plan that kicked off in 2018.

With the program, the CGA intends to expand its forces by having 141 new boats constructed within a decade with a budget of NT$42.6 billion (US$1.38 billion). The expansion, which will include four 4,000-ton, six 1,000-ton, and 12 600-ton ships as well as dozens of smaller vessels, is a response to the increasing volatility in the region and threats to maritime security, according to the CGA.

The new additions will allow Coast Guard officers to carry out their tasks more efficiently and in a safer environment, remarked President Tsai Ing-wen (蔡英文) at the boat launching ceremony. She expressed gratitude to Coast Guard officers for protecting the fishing rights of Taiwan’s fishermen, clamping down on smuggling operations, and blocking the entry of pork products that may be contaminated by African swine fever. Referring to the cutter, which has been named the “Anping,” Tsai said in addition to conducting regular Coast Guard duties, the ship can also be deployed in a military capacity if necessary. Meanwhile, the two patrol boats would aid Coast Guard officers in curbing smuggling and illegal border-crossings with their great agility, she added.

The launch of the four boats represents a milestone in the government’s efforts to develop domestically-built military ships, said Tsai. She added that shipbuilding would not only elevate Taiwan's national defense capabilities but also boost the growth of the industry in the country.