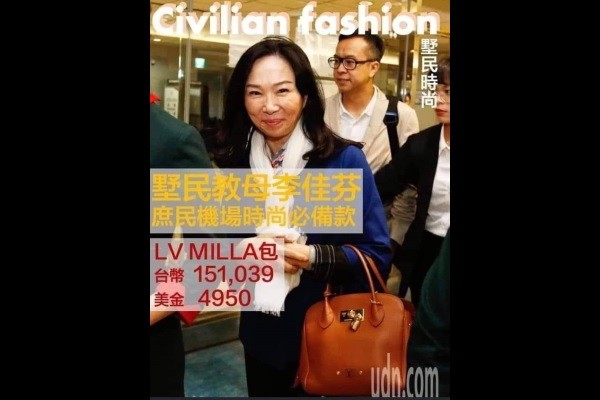 One of populist candidate Han's main slogans is that he's just another "common person" (庶民). To reinforce this image, Lee once publicly said that she is "the child of a farmer."

However, after revelations that the couple have owned multiple multi-million dollar mansions across Taiwan, with the most recently reported being valued at NT$72 million, his facade of being a simple everyday man has started to fade. This image has been further dented after Lee was spotted on several occasions carrying a luxury handbag worth nearly NT$150,000, prompting netizens to jokingly call the couple "super common folk" (超庶民).

Lee was first spotted carrying the brown bag during a public trip on Nov. 20, reported Liberty Times. The same bag was also witnessed by local Taiwanese media on Nov. 25 at the Taiwan Taoyuan International Airport as she prepared to board a flight to Malaysia.

When she returned to Taiwan on Nov. 28, the media was able to get the clearest glimpse of the pricey purse yet. After photos of the bag surfaced on UDN, netizens carrying out a web search based on the image determined that it is a Louis Vuitton (LV) Milla PM bag, which according to LV Taiwan's official website sells for NT$146,000.

Screenshot from LV Taiwan showing bag and its retail price.

On Wednesday (Dec. 4), the Facebook page Fatty Bipolar Life (肥肥的躁鬱人生) posted a meme of Lee holding the bag with the header "Civilian Fashion" in English. Many netizens felt the luxury accessory would further sully the "ordinary folk" image that the couple has tried to cultivate.

"How much minced pork rice and bottled water can you buy with this?"

"LV's best spokeswoman, the dowager living in the dirt."

"No matter how many expensive things she carries, they always seem to be very low."

"Not expensive, it's the gravel inside that would give it a high value."