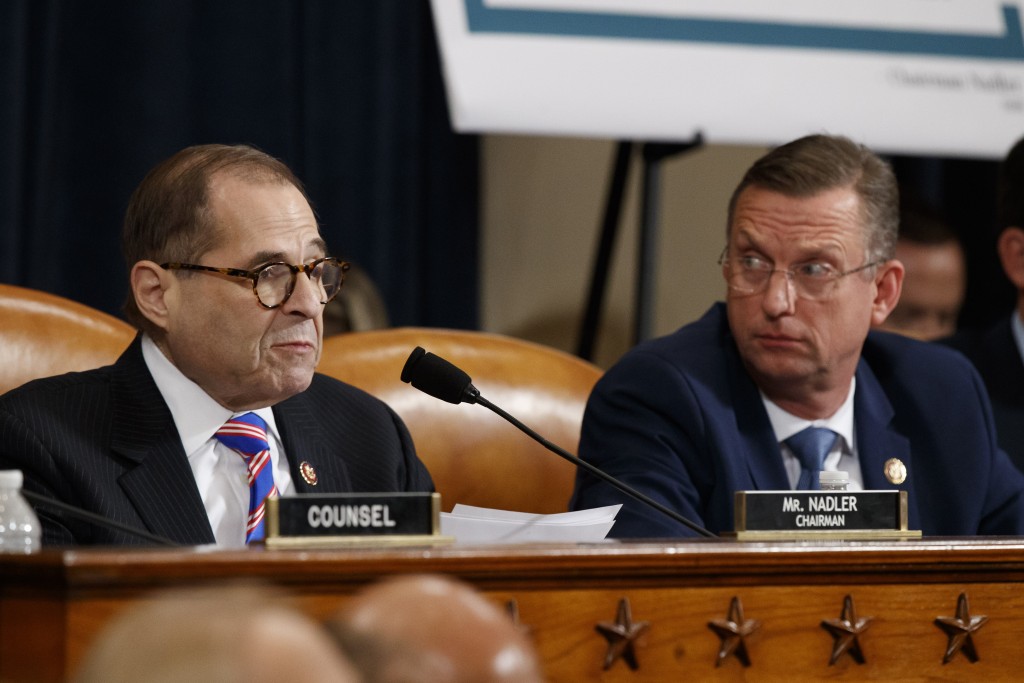 WASHINGTON (AP) — A different chairman. A committee twice the size. A shift from evidence to law.

Wednesday’s Judiciary Committee hearing was full of signs that the impeachment of President Donald Trump is advancing away from the drama of his Ukraine conduct toward the grave business of approving charges against him. That meant turning from tales of international intrigue and shadow diplomacy to scholarly talk about what the founders meant when they wrote the impeachment standard of “high crimes and misdemeanors” into the Constitution.

For a change, the famously combative Judiciary Committee plunged through the proceedings with comity and restraint. Chairman Jerrold Nadler, D-N.Y., on the hot seat to deliver experts who say Trump's behavior is impeachable, gaveled the committee through a handful of objections and roll call votes. For long stretches, 41 of the the fiercest partisans in the House sat through the professors' testimony as quietly as church mice.

The relative peace on the dais belied the bitterness that remains between the parties over whether Trump abused his office by pressuring Ukraine to investigate Democrat Joe Biden — and whether his actions are impeachable.

Partisan bickering and grousing bubbled forth at times. Nadler raised some hackles by suggesting that the still-to-be-decided impeachment articles might go beyond Trump's plans on Ukraine and wrap in his conduct during special counsel Robert Mueller's Russia investigation.

“This is Act II of the three-part tragedy of impeachment,” said Rep. Ben Cline, R-Va.

Republicans also took aim at a Democratic witness, Stanford law professor Pamela Karlan, who had joked early in the day that the president "can name his son Barron, he can't make him a baron."

She was trying to make the point that Trump is a president, not a king. Nonetheless, she apologized. First lady Melania Trump said Karlan "should be ashamed of your very angry and obviously biased public pandering, and using a child to do it."'

Broadly, there clearly was a shift afoot across Capitol Hill and the sense that the process was accelerating toward a House vote — and later the GOP-controlled Senate — no matter who objects or tweets.

The contrasts started even before Nadler's gavel fell on Wednesday. The night before, the House Intelligence Committee voted to send its report on Trump's Ukraine conduct to the Judiciary Committee charged with writing the articles of impeachment. Hours later, House Democrats gave the lead investigator, Chairman Adam Schiff, D-Calif., a sustained standing ovation inside a private caucus meeting. And House Speaker Nancy Pelosi made clear that impeachment loomed.

"Are you ready?” Pelosi, D-Calif., asked the assembled Democrats. The answer was a resounding yes, according to people in the room.

Meanwhile, Trump phoned into a private meeting with House Republicans and Vice President Mike Pence. By lunch, Senate Republicans were huddling with the White House counsel.

The president, arriving home from a bruising NATO meeting in London, was watching the House hearing, judging by his Twitter feed.

Inside the room, Republicans appeared to know it. For a few minutes, one of the posters behind the GOP chairs was a red-and-blue image of the United States whose label said it represented the 2016 election results. Trump is known for showing off such maps and says the impeachment drive is an effort to undo his election.

There was a bit of lightness, heretofore missing from the proceedings, which are so grave they've only been undertaken four times in American history.

Collins complained at one point about the chilly room, typically used by the House Ways and Means Committee.

“By the way, just for the information, Mr. Chairman, this is the coldest hearing room in the world,” he said, to rare agreement throughout the room. “And also for those of you who are worried (that) I'm uncomfortable and upset, I'm happy as a lark, but this chair is terrible.”

The lone Republican witness, Jonathan Turley of George Washington University, made an effort to link all the high-minded constitutional talk, the nation's sour mood and the crowd-pleasing topic of dogs.

The United States, he said, is in what Alexander Hamilton suggested is a period of agitated passions.

“I get it. You are mad. The president is mad, my Republican friends are mad, my Democratic friends are mad. My wife is mad. My kids are mad, even my dog seems mad. And Luna is a goldendoodle and they don't get mad,” he said. “So we are all mad. Where has that taken us? Will a slipshod impeachment make us less mad?”