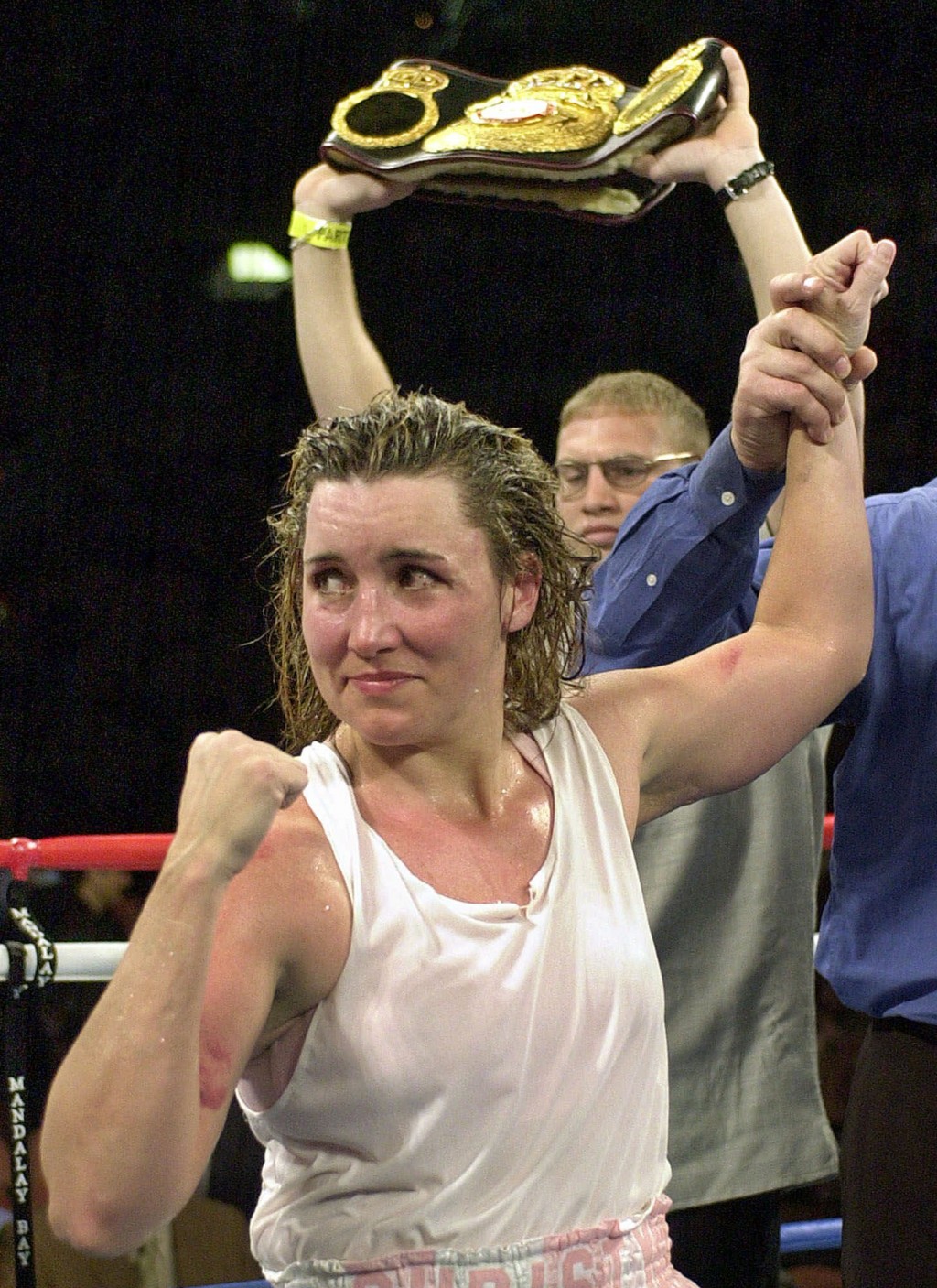 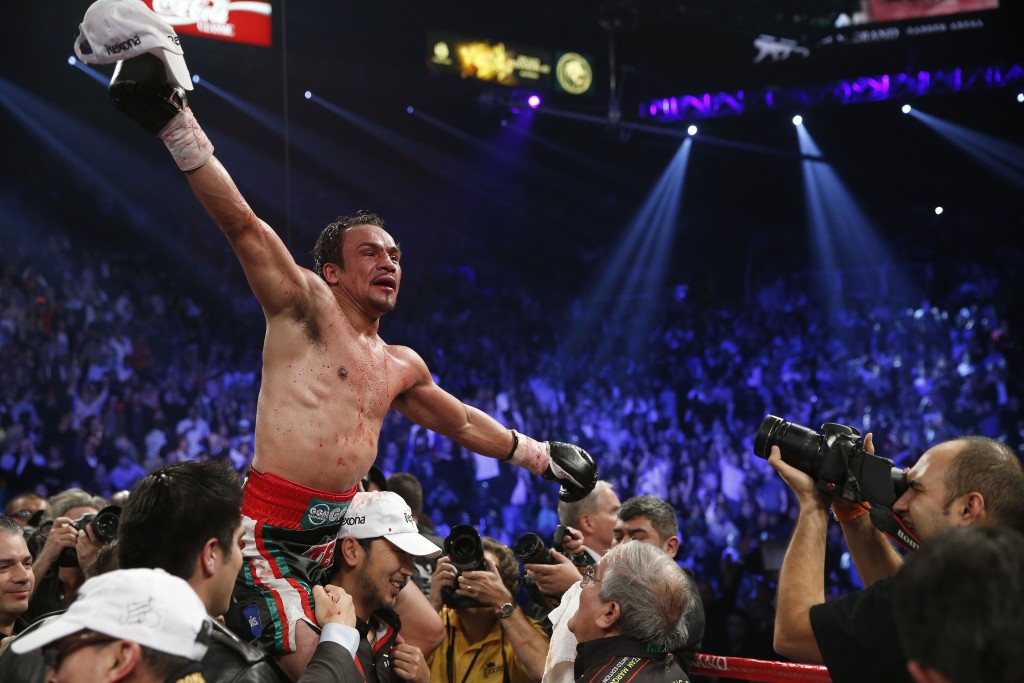 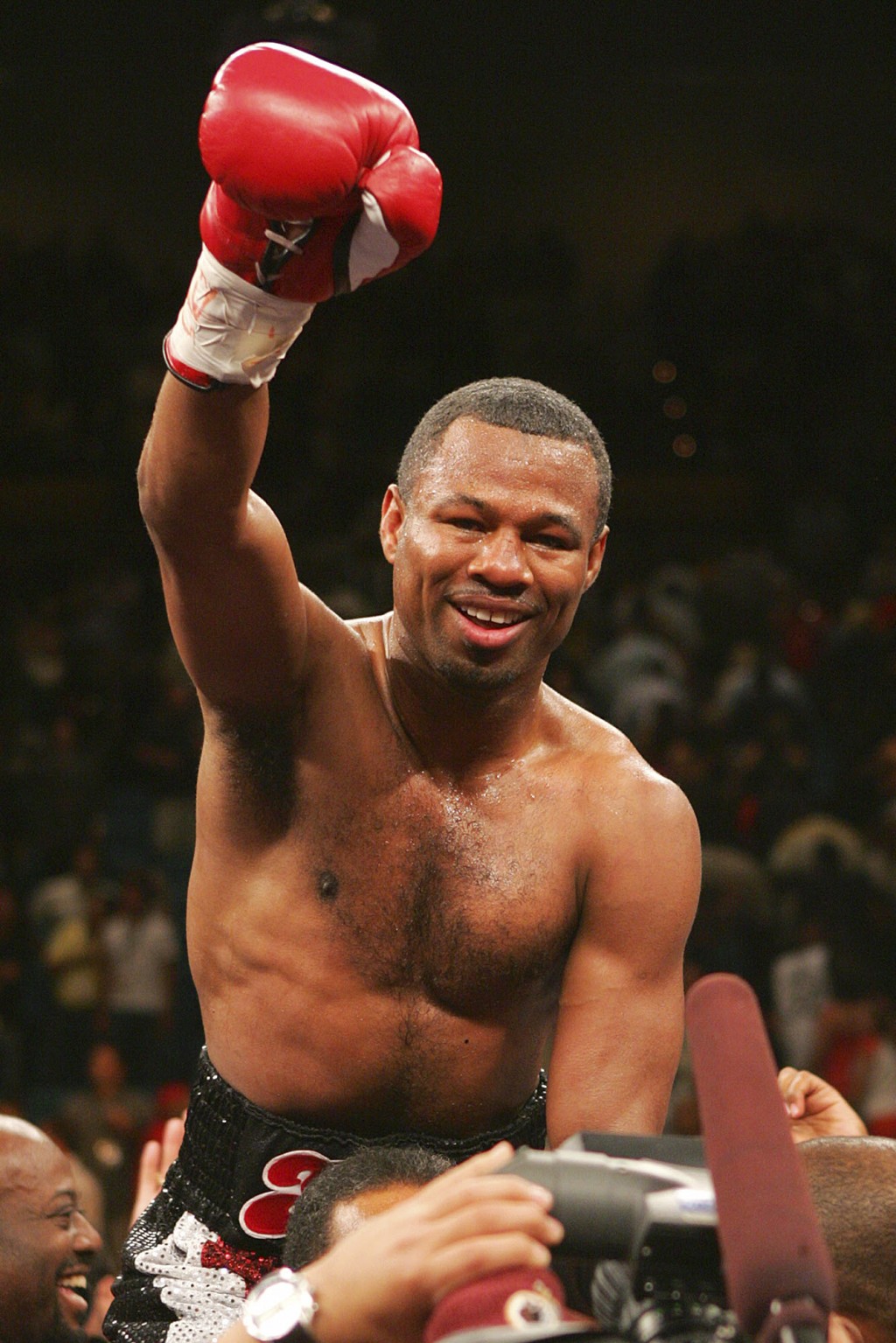 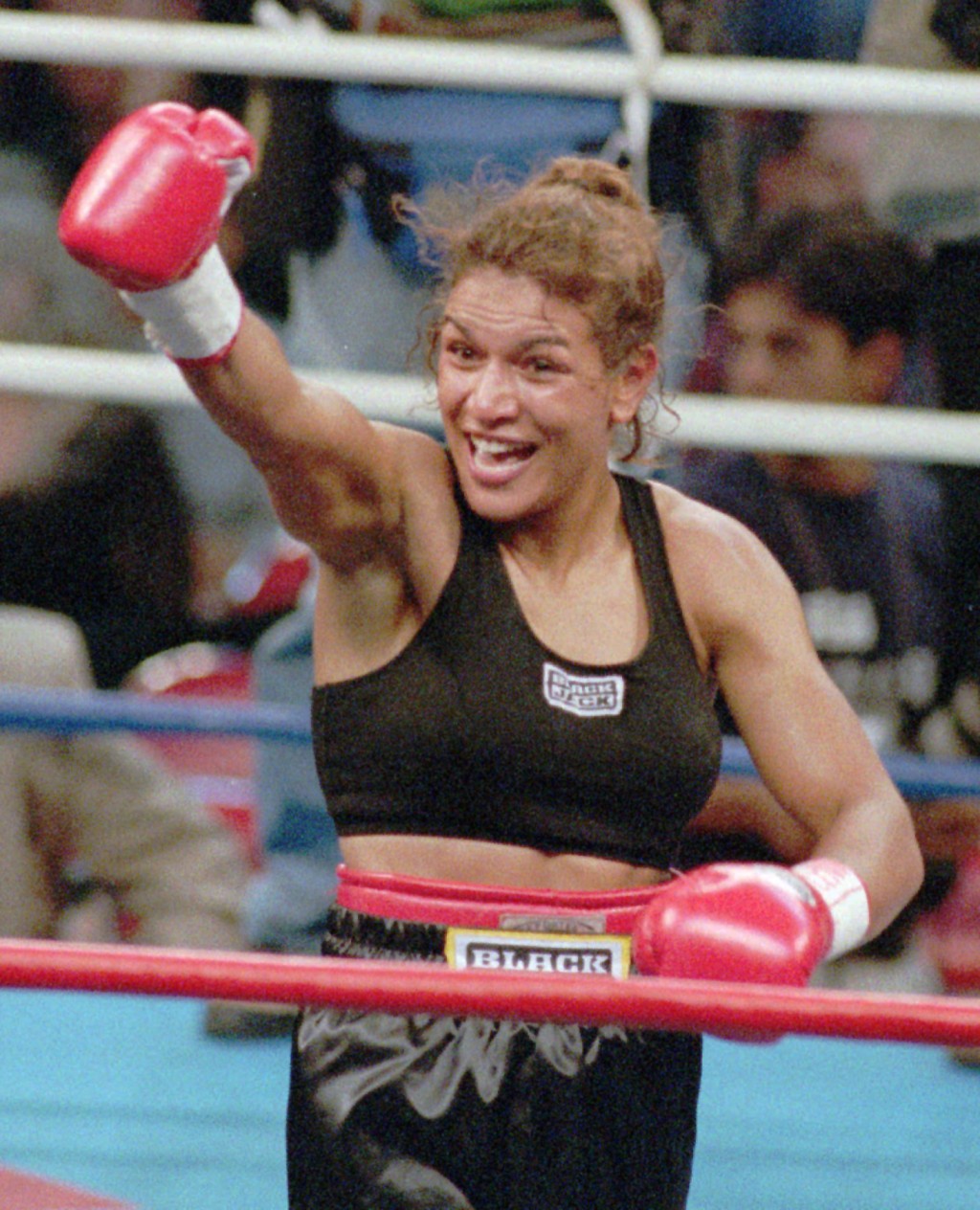 JUAN MANUEL MARQUEZ: Nicknamed “Dinamita.” ... born Aug. 23, 1973 in Mexico City. ... turned pro in 1993 and captured the NABO, NABF and USBA featherweight titles before stopping Manuel Medina (KO-7) for the vacant IBF featherweight title and Derrick Gainer in a technical decision in 7 rounds for the WBA featherweight belt in 2003. ... before being stripped of both belts in 2005 drew with Manny Pacquiao and scored 12-round wins over Orlando Salido and Victor Polor in title defenses. ... following a controversial 12-round loss to Chris John for the WBA belt, Marquez rebounded to win the interim WBO title in 2006. ... moved up in weight to win the WBC super featherweight belt with a 12-round victory over Marco Antonio Barrera in 2007. ... lost the belt in 12-round decision to Pacquiao in a rematch the next year. ... scored a ninth-round knockout over Juan Diaz to win WBO lightweight and WBA world lightweight belts in 2009 to become a three-division champion. ... after defending against Diaz (W-12) and Michael Katsidis (KO-9), lost in 12 rounds to Pacquiao in their third bout for the WBO 147-pound belt. ... defeated Serhiy Fedchenko (W-12) for the WBO light welterweight title to become a four-division champion. ... in 2012 knocked out Pacquiao in the sixth round of their fourth meeting. ... following a 12-round loss to Timothy Bradley and a 12-round win over Mike Alvarado (W 12) retired in 2014 with a record of 56-7-1, including 40 KOs.

CHRISTY MARTIN: Nicknamed “The Coal Miner’s Daughter.” ... born Christy Renea Salters on June 12, 1968 in Mullens, West Virginia. ... a scholarship basketball player at Concord College, she graduated with honors in education and began boxing on a dare in 1986 while still in college, entering and winning a Tough Woman contest. ... turned pro in 1989 while working as a substitute teacher in Tennessee. ... in 1993 became the first woman to sign a promotional contract with Don King. ... posted a six-round decision in 1996 over Deirdre Gogarty in Las Vegas on the Tyson vs. Bruno II undercard. ... became the face of women’s boxing and landed on the cover of Sports Illustrated. ... won WBC super welterweight championship in 2009 and compiled a 49-7-3 with 31 KOs in a professional record that included a draw with Laura Serrano and wins over Melinda Robinson, Belinda Laracuente, Andrea DeShong, Isra Girgrah, Kathy Collins, Mia St. John and Dakota Stone. ... remains in the sport as CEO of Christy Martin Promotions.

LUCIA RIJKER: Nicknamed “The Dutch Destroyer.” Born Lucia Frederica Rijker on Dec. 6, 1967 in Amsterdam, Netherlands. ... posted a 37-0 kickboxing record before moving to Los Angeles in 1994 to pursue a career in boxing. ... at 5-foot-6 honed her craft at the Ten Goose Boxing Club in 1995 under Joe Goossen. ... made her pro debut in 1996, switched to trainer Freddie Roach, and signed a promotional contract with Bob Arum’s Top Rank. ... first licensed female boxer in her home country. ... went undefeated for eight years, posting a 17-0 record with 14 KOs. ... captured the WIBF super lightweight title in 1997 and the IBO super lightweight title in 1998. ... scored wins over Chevelle Hallback, Andrea DeShong and Jane Couch. ... in 2005 portrayed “Billie The Blue Bear” in the Academy Award-winning motion picture “Million Dollar Baby," starring alongside Hilary Swank, Morgan Freeman and Clint Eastwood. ... a proposed super fight with Christy Martin was scheduled in 2005 but was canceled due to an Achilles tendon injury. ... Rijker last fought in 2004 but has remained in the sport as a trainer, guiding Diana Prazak to a WBC world title.

TRAILBLAZER (last bout no later than 1988)

BARBARA BUTTRICK: Nicknamed “The Mighty Atom of the Ring.” ... born Dec. 3, 1929 in Hessle, Yorkshire, England. ... became interested in boxing as a teenager after reading about Polly Burns, who boxed in the early 1900s. ... at age 18 and 4-foot-11 and 98 pounds began training in London’s Wayfair Gym and boxed in exhibitions at fairs in England and France as part of a traveling boxing troupe since women’s professional boxing was banned by the BBBC. ... ventured to the U.S. in 1952 with her husband/ trainer Len Smith recognized as the flyweight champion of the world. ... boxed throughout North America and only lost once, to JoAnn Hagen, who outweighed her by 30 pounds. ... won bantamweight championship of the world with a unanimous decision over Phyllis Kugler in 1957. ... retired in 1961 with a pro record of 30-1-1 after a groundbreaking career that included over 1,000 boxing exhibitions against both men and women. ... remained in boxing as a licensed manager and trainer and in 1993 started the Women’s International Boxing Federation (WIBF).

PADDY RYAN: Born Patrick Henry Ryan on March 15, 1853 in Thurles, Tipperary, Ireland. ... came to the United States with his family at age 8 and settled in Troy, New York. ... as a teen worked as a lock tender on the Erie Canal and took up boxing under Rensselaer Polytechnic Institute athletic director Jimmy Killoran. ... boxed in many contests, but there is no definitive record of his early exploits. ... the 5-11 Ryan won the American heavyweight championship by stopping Joe Goss in 87 rounds on May 30, 1880 in what was technically his first professional bout. ... lost the title to John L. Sullivan in nine rounds in 1882 in Mississippi City. ... Ryan, who suffered from Bright’s Disease, died Dec. 14, 1900 in Green Island, New York.

FRANK ERNE: Born Erwin Erne on Jan. 8, 1875 in Zurich, Switzerland. ... settled in Buffalo, New York at age 7 with his family and took up boxing while in school. ... after finding success as an amateur turned pro in 1892 and quickly climbed the featherweight ranks. ... defeated Jack Skelly twice and drew with George Dixon and Young Griffo. ... various sources credit his 1896 win in 20 rounds over featherweight champion Dixon as a title fight. ... moved up to lightweight and drew with champion George “Kid” Lavigne in 1898. ... a 25-round win over George “Elbows” McFadden set up a rematch with Lavigne and Erne captured the lightweight title with a 20-round decision. ... defended against “New York” Jack O’Brien (25 rounds) and Joe Gans (KO-12). ... unsuccessfully challenged Rube Ferns in 1901 for the world welterweight title (KO-9). ... returned to lightweight ranks to defend against Gans and lost the title in a first-round knockout. ... inactive from 1904-07 when he served as boxing instructor at Yale. ... returned to the ring for a bout in 1908, besting Curley Watson in 10 rounds and promptly retired with a pro record of 30-6-11 with 15 KOs and one NC. ... died Sept. 17, 1954 at Beth David Hospital in New York City at age 79.

BERNARD FERNANDEZ: Journalist. ... born in New Orleans and was introduced to the sport by his prizefighting father. ... began his sports writing career as a copy boy at the New Orleans Times Picayune and also worked at the Miami Herald and Jackson Daily News in Mississippi. ... first super fight he covered was in his hometown when Muhammad Ali and Leon Spinks fought a rematch at the Superdome in 1978. ... moved to Philadelphia and began covering sports for the Daily News in 1984. ... took over the boxing beat in 1987 and remained until 2012. ... also covered Mike Tyson-Michael Spinks, Buster Douglas’s upset of Tyson, the Micky Ward vs. Arturo Gatti series, and Julio Cesar Chavez’s 12th-round stoppage of Meldrick Taylor. ... now writes for The Ring and The Sweet Science. ... has won over 100 awards for writing and public service, including the 1998 BWAA Nat Fleischer Award for excellence in boxing journalism and the 2015 Barney Nagler Award for long and meritorious service to boxing. ... five-term president of the BWAA. ... also appeared in three boxing films: “Play It To The Bone," “Rocky Balboa" and “Real Steel."

THOMAS HAUSER: Journalist. Born Feb. 27, 1946 in New York City. ... graduated from Columbia Law School in 1970 and was a law firm associate from 1971-77. ... while at Columbia hosted radio show “Personalities In Sports," where he interviewed stars including Muhammad Ali. ... turned his attention to writing and in 1986 authored the acclaimed “The Black Lights: Inside the World of Professional Boxing.” ... chosen to be official biographer in 1991, he published his seminal work “Muhammad Ali: His Life and Times,” one of 52 books he’s written ... in 2004 he was awarded the BWAA Nat Fleischer Award for excellence in boxing journalism.

KATHY DUVA: Began as publicist at Main Events in 1977 and took over as CEO upon husband Dan’s death in 1996. ... orchestrated the return of boxing to network television with the “NBC Boxing Series" (2003-04) and “Fight Night on NBC" (2012). ... partnered with ESPN to bring pay-per-view boxing to the network. ... one of the top promoters in boxing for over two decades and one of the few female promoters in the business. ... joins husband and father-in-law Lou Duva in the Hall of Fame.