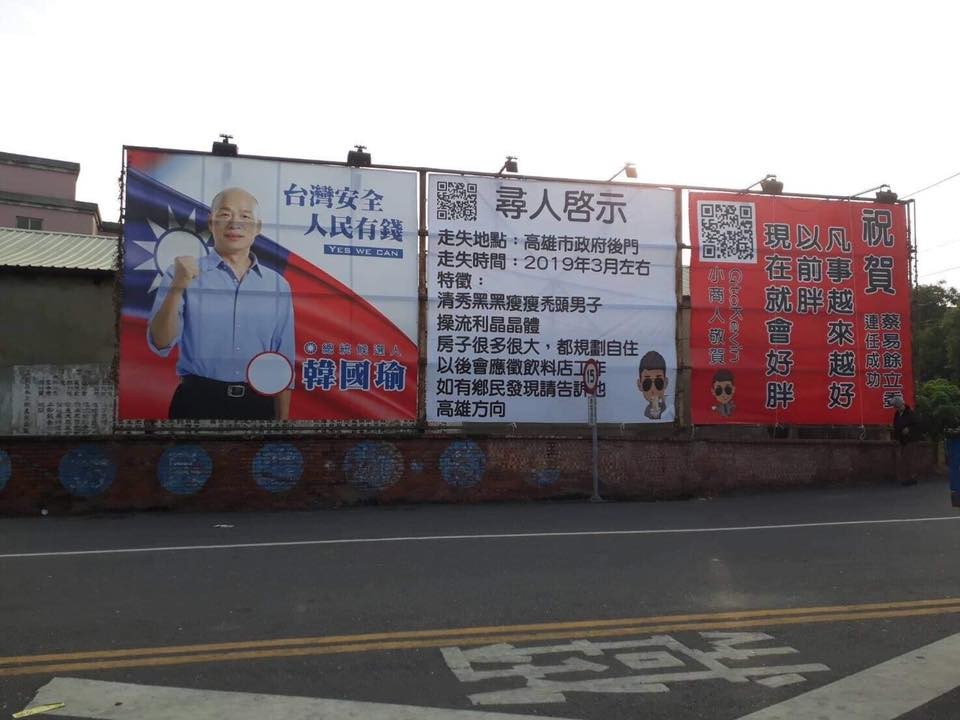 TAIPEI (Taiwan News) — A photo surfaced earlier this week showing a missing person ad searching for Han Kuo-yu (韓國瑜), who has taken a three-month sabbatical from his post as Mayor of Kaohsiung to focus on campaigning as the Kuomintang (KMT) candidate for president.

On Tuesday (Dec. 3), popular Taiwanese blogger Gtokevin (小商人) posted a photo on his Facebook page showing a missing person advertisement on a billboard strategically placed next to an advertisement for Han in southwestern Taiwan's Chiayi County. In the post, Gtokevin wrote, "Missing person ad. Please help out and guide him to where he should go."

The ad reads as follows:

"Place last seen: The back door of the Kaohsiung City Government

In the future may apply for a job at a beverage shop.

If villagers spot him, please give him directions to Kaohsiung."

"Kaohsiung people thank you. But we hope he won't come back and find somewhere else to stay on his own."

"There's no such thing as the craziest, only crazier."

"If you find him, please send him directly to to the other side [of the Taiwan Strait]. No need to send him back to Kaohsiung, thanks."

In response to news of the billboard, Han's campaign office said that Taiwan is now a democratic and free society. Han's camp added that, "As long as it does not violate laws and regulations, represent hate speech, or attack individuals, the people's freedom of speech is a valuable aspect of Taiwan's democratic values, which we fully respect," reported UDN.