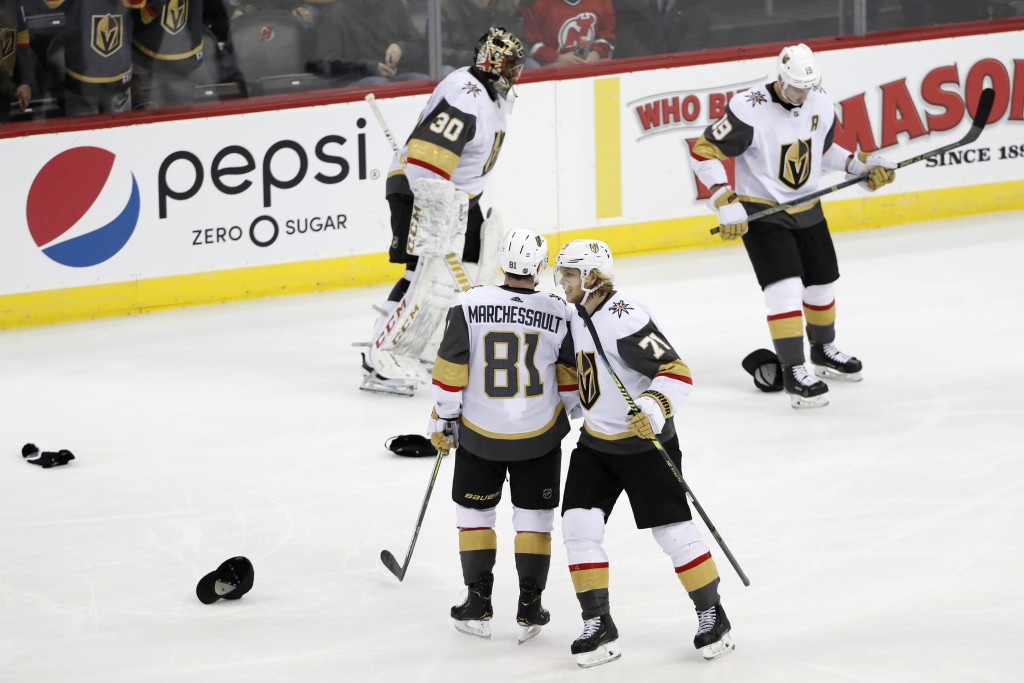 Marchessault scored twice in the first 5:04 of the third to give the Golden Knights a 3-2 lead. He added a power-play goal midway through the period, and Vegas held on even after New Jersey’s Nico Hischier scored 20 seconds later.

The Golden Knights have won four straight to improve to 15-11-4. Malcolm Subban had 32 saves, and Chandler Stephenson scored in his first game since being acquired Monday from the Washington Capitals.

Hynes was fired Tuesday after a 9-13-4 start that left the team in last place in the Metropolitan Division and with the NHL’s second worst record.

PHILADELPHIA (AP) — Claude Giroux scored the go-ahead goal midway through the third period and Philadelphia had three goals in the final 2:06 to get their fifth straight win.

Travis Konecny had a goal and an assist for Philadelphia, which has earned points in seven straight games (6-0-1). The Flyers had an NHL-best 24 points in November, going 10-2-4 to tie a franchise record for most points in a month. Carter Hart finished with 27 saves.

Travis Dermott scored for Toronto, which lost for just the second time in six games since Sheldon Keefe replaced the fired Mike Babcock as head coach on Nov. 20.

MONTREAL (AP) — Phillip Danault, Brendan Gallagher and Shea Weber each had a goal and an assist, and Montreal beat New York to snap an eight-game losing streak.

Jeff Petry also scored and Carey Price stopped 21 shots to earn his 11th win of the season for Montreal, which ended an 0-5-3 skid.

Scott Mayfield and Matthew Barzal scored in the third period for the Islanders, and Thomas Greiss finished with 36 saves.

BOSTON (AP) — Charlie Coyle scored late in the third period, Jaroslav Halak stopped 24 shots for his second shutout of the season, and Boston beat Carolina for its eighth straight win.

David Krejci also scored for Boston, just 1:08 after Coyle got the Bruins on the scoreboard.

James Reimer finished with 32 saves for the Hurricanes.

Carl Soderberg had an empty-net goal and assisted on two of the earlier goals.

Aleksander Barkov and Jonathan Huberdeau scored for the Panthers, who have lost four of their past five games. Chris Driedger made 22 saves in his second straight start.