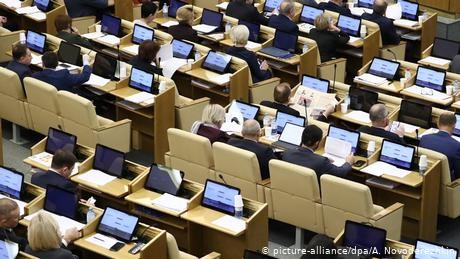 Russia's government classifies NGOs and media outlets that receive funding from abroad as "foreign agents." The law applies to organizations that receive even the smallest financial contribution from outside of Russia's borders.

On Tuesday, President Vladimir Putin put his signature on the legislature's amendments to the existing law: If NGOs and press outlets are classified as foreign agents, their permanent and freelance staff are, too. Now journalists working for media that receive international funding can be deemed foreign agents, too.

Leonid Levin, who chairs the Committee on Informational Policy, Technologies and Communications in Russia's federal assembly, the State Duma, said people who cover topics such as sports or music would have "minimal risk of being placed on the watch list." However, he said, if someone writes "about societal or political topics, it could get more complicated." He added that this is his "personal view." The Foreign and Justice ministries have the ultimate say in which organizations and individuals are classified as foreign agents.

Read more: Why Putin wants to make 'new Russians' out of Ukrainians

After Putin returned to the presidency in 2012, pressure on media organizations and NGOs increased. That was also the year in which internationally funded nonprofits were first required to register as foreign agents.

In 2017, the law was broadened to include media outlets.

Media organizations and NGOs on the government's watch list have to undergo tough and repeated vetting and must publicly identify themselves as foreign agents on their websites and elsewhere. Failure to do so can lead to steep fines or orders to cease operating. In October, Russia's Supreme Court ordered Lev Ponomarev's For Human Rights movement dissolved based on alleged violations of the law.

Mikhail Fedotov, who until October chaired the Presidential Council for Civil Society and Human Rights, has been "highly critical" of the amendments. He said it was "absurd, from a legal perspective, to treat an individual like a mass media outlet."

Dunja Mijatovic, the Council of Europe's human rights commissioner, had urged the Duma not to further amend the law, saying it "would deal a major blow to media freedom and people's ability to receive and impart information."

Authorities currently classify 74 Russian NGOs as foreign agents. And, according to the Justice Ministry, 10 media outlets are already classified as foreign agents. Among them are the US government broadcasters Voice of America and various Radio Free Europe/Radio Liberty (RFE/RL) outlets, such as Currenttime.tv. No German media are on Russia's watch list.

How much individuals could be fined under the amendments has not yet been reported.