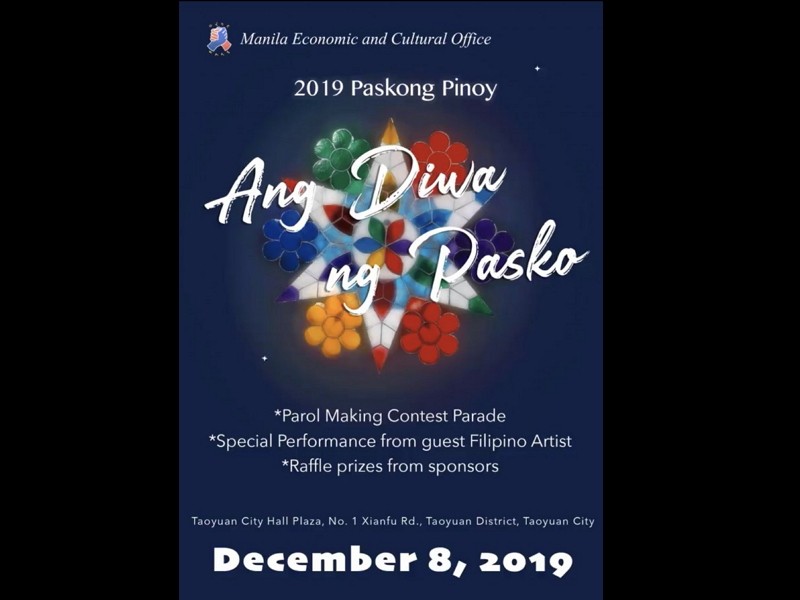 The Philippine representative office will host a Christmas celebration in Taoyuan on Sunday to spread festive cheer for Filipinos in Taiwan with prizes, cultural presentations and a performance by a special celebrity guest from the Philippines.

The event, titled "2019 Paskong Pinoy: Ang Diwa ng Pasko" (2019 Filipino Christmas: The Spirit of Christmas), will be held in Taoyuan City government square and aims to share the joy of Christmas, which is an important cultural festival for Filipinos, said Sabrina Aaron, director for the assistance to nationals section at the Manila Economic and Cultural Office.

With over 1,500 people expected to attend, one of the highlights of the celebration will be the competition for the best star-shaped lantern, known in the Philippines as a parol, from a shortlist of 10 works, after 50 entries were received by the final submission date of Nov. 22.

Her office found it difficult to choose the top 10 works because they were all really exquisite and stunning, Aaron said.

The parol is one of the most popular cultural presentations and decorations in the Philippines and it represents the Star of Bethlehem that guided the Three Wise Men after the birth of Jesus, Aaron said.

"In the Philippines, we decorate trees as early as September and start to countdown the days until Christmas. That's how excited we are to celebrate Christmas," she told CNA.

The vast majority of Filipinos are Christians with about 80% identifying as Catholic, Aaron added.

Another highlight at the event will be the performance of Filipino singer-songwriter Daryl Ong, who rose to fame after taking part in reality singing competition The Voice of the Philippines (season 2), which ran from October 26, 2014 to March 1, 2015.

Ong will perform as a special celebrity guest for Taiwan's many Filipino migrant workers, Aaron said.

"The objective for this event is primarily to provide fun and recreation to our hardworking migrant workers. We also want to ease their homesickness and make them feel as if they are celebrating Christmas in the Philippines," Aaron told CNA.

There are 157,030 Filipino migrant workers in Taiwan, making them the third largest group of migrant workers in the country after Indonesia and Vietnam, according to statistics published by the Ministry of Labor valid up until the end of October.

There will also be a raffle, according to promotional materials for the event.