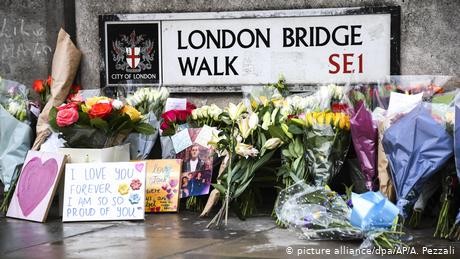 A vigil will be held at Guildhall Yard in the City of London on Monday for the victims of the terror attack on London Bridge last Friday.

The two people killed — Saskia Jones, 23, and Jack Merritt, 25 — will be honored in the memorial service.

The ceremony will also pay tribute to the emergency services and the people who stepped in to tackle the attacker.

A book of condolence will be opened at Guildhall Art Gallery and Londoners will also be able to lay flowers nearby, according to a statement released by the mayor of London's office.

Guildhall Yard is less than a kilometer from where convicted terrorist, Usman Khan, 28, carried out the knife attack on Friday.

Mayor of London, Sadiq Khan, praised the actions of the Londoners who stepped in to stop the attackers saying "like many, I will never forget the bravery of ordinary Londoners and the emergency services who risked their own lives to save others. They are the best of us. Our city — the greatest city in the world — will continue to stand united and resolute against terror."

Who were the victims?

Saskia Jones and Jack Merritt had been helping host an event to mark five years of Cambridge University's "Learning together" prisoner rehabilitation program.

Both victims had studied at the university and Merritt worked as a course coordinator at Cambridge University's criminology institute and Jones was volunteering at the event.

In a statement released through police, Merritt's family paid tribute to "our beautiful, talented boy" who they said had died "doing what he loved."

"Jack was an intelligent, thoughtful and empathetic person who was looking forward to building a future... and making a career helping people in the criminal justice system," they said.

Jones's family described her as "a funny, kind, positive influence at the center of many people's lives" who had recently applied for a police graduate recruitment program, hoping to specialize in a victim support role.

"She was intent on living life to the full and had a wonderful thirst for knowledge, enabling her to be the best she could be," they added.

Cambridge University's vice chancellor said he was "devastated to learn that among the victims were staff and alumni."

"What should have been a joyous opportunity to celebrate the achievements of this unique and socially transformative program, hosted by our Institute of Criminology, was instead disrupted by an unspeakable criminal act," he added.

"Our university condemns this abhorrent and senseless act of terror."

The attacker, Usman Khan, had attended the prisoner rehabilitation program.

The attack has sparked a debate in the UK over whether convicted terrorists should be eligible for early release.

Prime Minister Boris Johnson on Sunday said that 74 people jailed for terror offences and released early will have their license conditions reviewed.

Merritt's family, however, have cautioned against what they called a "knee-jerk reaction" saying that their son would have been opposed to "even more draconian sentences on prisoners."