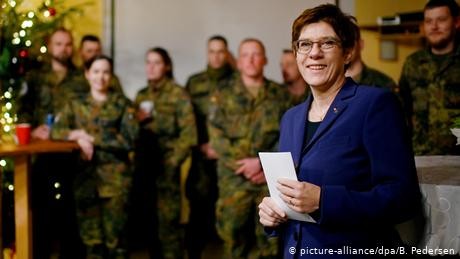 Federal Defence Minister Annegret Kramp-Karrenbauer on Sunday warned of the growing influence of Russia and China in the Western Balkans during a visit to Kosovo.

Kramp-Karrenbauer met her counterpart Damir Krsticevic in Croatia on Sunday and then travelled on to Kosovo to visit the German Kosovo Force (KFOR) contingent.

"We know that the entire region is regarded with particular interest by China, but also by Russia," Kramp-Karrenbauer said in Pristina at the headquarters of the NATO force KFOR.

KFOR has been working to secure peace in Kosovo since the NATO's combat mission against Serb troops 20 years ago.

Forms of influence, such as those known from the Baltic States, are also being observed. Russia is as critical of the Baltic's ties to the West as it is of Kosovo's previous orientation towards the EU and NATO.

Kramp-Karrenbauer said that KFOR was not only making a contribution to solving the basic conflict in the region, but also to enabling Kosovo, as an independent country, to decide on its own political future.

"This corresponds to our understanding and our values of political sovereignty of states," said Kramp-Karrenbauer.

Kramp-Karrenbauer will travel to Afghanistan on Monday, where she has said she wants to meet with soldiers from the German armed forces.

About 1,200 German soldiers are stationed in Afghanistan as part of the NATO-led mission "Resolute Support."

In mid-February, the Federal Cabinet decided to extend the deployment of the German Armed Forces in Afghanistan. The mission focuses on training and advising Afghan security forces.

At the site in Masar-i-Scharif, northern Afghanistan, some 1000 Bundeswehr soldiers are deployed.