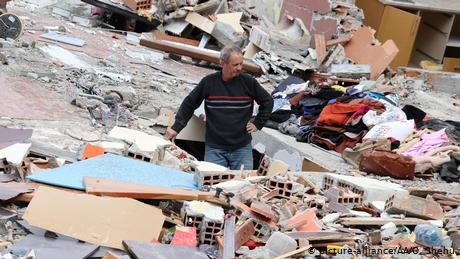 As Albania begins to clean up and take stock following a devastating earthquake earlier this week, German Chancellor Angela Merkel has promised to help with recovery efforts.

"Germany and the European Union will support you at this difficult time," Merkel said in a condolence message to Albanian Prime Minister Edi Rama on Sunday.

The chancellor also offered her condolences to the victims' families and the Albanian government.

"I know about the pain that you and your own family have also experienced," she wrote. The partner of the prime minister's son was reportedly among those killed.

The 6.4 magnitude earthquake on Tuesday killed 51 people and injured hundreds of others in the small Balkan state. Thousands more were left homeless.

'Impossible to do this alone'

Earlier Sunday, Rama called on the international community to send financial aid and expert assistance to help the country recover.

"Simply, this is humanly impossible to do this alone,'' Rama said at cabinet meeting.

Civil engineers from European Union member states and from the United States have already teamed up with local experts to assess the damage caused by the quake.

Albania ended a multiday search-and-rescue operation on Saturday and has started the cleanup process. An estimated 2,000 buildings were damaged.

The three districts hit hardest by the quake — Tirana, Durres and Lezha — remain in a state of emergency. It is unclear when schools will reopen.

On Sunday morning, the mayor of Durres resigned after saying she was "pleased" that only around 50 people had died in the quake. In remarks made on Saturday, Mayor Valbona Sako blamed code violations, poor construction and corruption for the bulk of the deaths. Her remarks sparked outcry, with people accusing her of insensitivity,

Tuesday's earthquake, which struck off Albania's Adriatic coast, was the deadliest to hit the country in decades.