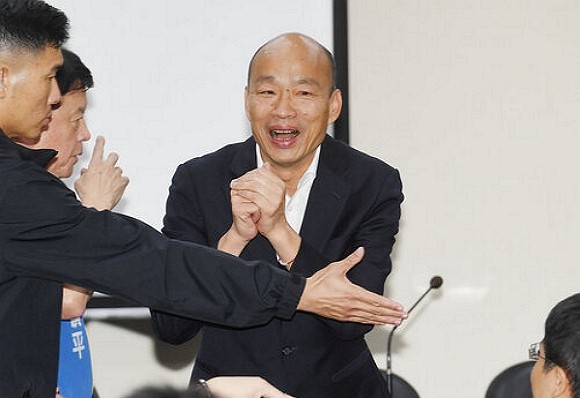 Kuomintang (KMT) presidential nominee Han Kuo-yu (韓國瑜) on Saturday (Nov. 30) came out in favor of marriage equality for the first time, saying he hoped and prayed that people who love each other can choose to become a family.

Several times on his ongoing nationwide "listening tour," audience members have criticized the passage of marriage equality legislation earlier this year, but the candidate has largely resisted explaining his own views on the issue.

At a campaign event in Taipei on Saturday, a young supporter noted the issue's importance to the younger generation, and asked if Han would support efforts by some KMT lawmakers to repeal the legislation.

Han responded that in life -- from our family relationships at home, to our friendships at school, to our romantic relationships as adults -- attachment and love are inescapable.

"And so I hope and pray that people who love each other can become family in the end. I completely respect people's relationships, because they can see their own situation most clearly," Han said.

Some media outlets said Han's response has changed from last year, when during his 2018 campaign for Kaohsiung mayor, Han offered support for the traditional "family values" espoused by many branches of Christianity.

The reports also stated that during a speech this month in Taichung, Han's wife, Lee Chia-fen (李佳芬), said that marriage equality had been "overexploited," and that Han would review the policy if elected president.

In a separate question during Saturday's event, Han was asked about his "frequent verbal slips," to which he replied that in spite of his occasional mistakes, he nevertheless preferred speaking without a script, and interacting with people directly.