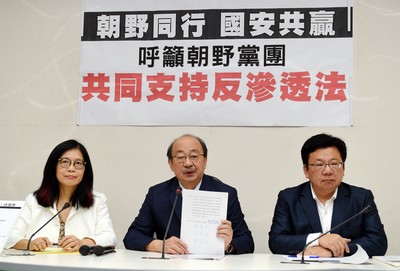 A draft bill designed to complement existing laws on preventing foreign hostile forces from intervening in Taiwan's democratic political system and elections went directly to a second reading at the Legislative Yuan Friday.

The draft Anti-Infiltration Act, which was unveiled Monday by the ruling Democratic Progressive Party (DPP), prohibits political donations, influencing elections, and launching public referendums at the instruction or with the financial support of anyone affiliated with a hostile force.

"Infiltration sources" are defined in the draft bill as organizations or institutions affiliated with the government, political parties or other political groups of a foreign hostile force, and individuals dispatched by those entities.

A hostile force is defined as a country or group at war or in a military standoff with Taiwan that upholds the idea of jeopardizing Taiwan's sovereignty by non-peaceful means, according to the bill.

Earlier this week, the opposition Kuomintang's (KMT) caucus whip Tseng Ming-ching (曾銘宗) said the party was not in favor of skipping the committee stage in the Legislature and putting the bill directly to a second reading, as it contains ambiguities that need to be reviewed.

Tseng criticized the draft Anti-Infiltration Act, saying it is a blatant ploy to manipulate the Jan. 11, 2020 presidential and legislative elections.

The KMT will not endorse the bill, he said.

The draft bill, which was sent for a second reading on Friday, still has to pass second and third readings before becoming law.

The DPP had said it hoped the bill will be passed before the Legislature goes on recess at the end of December.

Also Friday, the KMT held a press conference in Taipei to announce an alternative to the ruling party's draft Anti-Infiltration Act, dubbed the "Anti-annexation of the Republic of China Act."

According to the KMT, the draft bill aims to prevent so-called "hostile forces," both foreign and domestic, from interfering in Taiwan's democratic political system.

It also stipulates that public servants, including the head of state, must not seek to limit or suppress freedom of speech.

KMT lawmaker Lin Wei-chou (林為洲), who was at the press event, said the party's anti-annexation bill adopts a comprehensive approach that extends the scope beyond China.

"It's not only reunification with China that subverts the Republic of China," Lin said, noting that becoming part of Japan, or becoming one of the 50 states of the United States, would be an equal violation of the party's anti-annexation act.

According to Tseng, the KMT will propose the draft bill to the Legislative Yuan next Friday.