A decision by the Taiwan government to require advance notice of any planned school trips to China for educational exchanges is aimed at protecting teachers and students from Beijing's propaganda in its push for unification, the Ministry of Education (MOE) said Wednesday.

When the policy is implemented in December, schools will have to give the Taiwan government one month's notice so that a risk assessment could be conducted, in the interest of the traveling students and teachers, the MOE said.

The notice, which can be submitted online, must clearly state the itinerary of the Taiwan group and with whom they will be interacting in China, the ministry said.

Upon return of the group to Taiwan, the school will have to file a report with the government about the trip, the ministry said.

However, government approval will not be required to make such trips, the MOE said.

Following the MOE's announcement of the new policy on Wednesday, several commentators blasted it as an attempt at political interference in cross-strait exchanges.

According to the MOE, such exchanges must be conducted within the ambit of the law, which prohibits Taiwanese from engaging in political activities in mainland China.

The ministry was referring to Article 33-1 of the Act Governing Relations between the People of the Taiwan Area and the Mainland Area.

In July, more than 200 Taiwanese school principals on an exchange visit to China were asked to attend an event at which a Chinese official quoted China President Xi Jinping (習近平) as saying in a speech in January that unification with Taiwan remained a primary goal and that Beijing reserved "the option to take any necessary measure" toward that end. 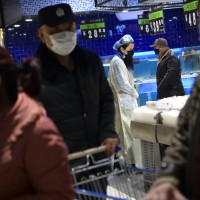