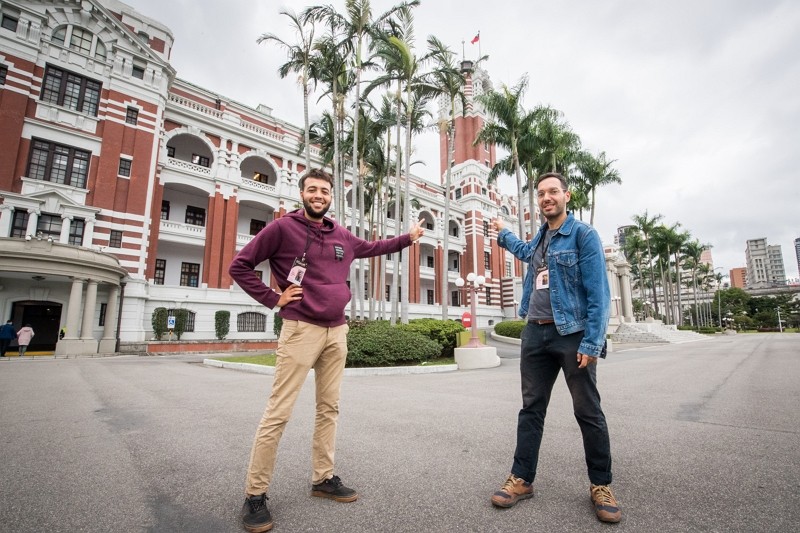 TAIPEI (Taiwan News) — The seventh group to participate in “Spend a Night @ Taiwan’s Presidential Office Building” have shared their thoughts on Taiwan after staying at the iconic site from Nov. 27-28.

The latest guests of Presidential Office Building were French surrealist photographer Victor Habchy, who is known for his photos of the Burning Man event in the western U.S., and food journalist Ali Lair. According to CNA, the two found out about the event through the Representative Office of Taiwan in France, and they were eventually selected from among the 167 groups that applied.

Habchy and Lair described their stay as “comfortable and pleasant,” saying they were made to feel as if they were at home, and expressed appreciation for the customized towels printed with their names on them and the Taiwan-shaped pillows that were given as gifts.

Lair said that the trip had changed his perception of Taiwan. He used to just see Taiwan as a country that makes quality products and the home of Oscar-winning director Ang Lee, but now he feels that "Taiwanese are very hospitable; the environment is safe; and the foods are super delicious,” CNA cited him as saying.

“We try new things every time we go out. For foodies like us, having so many options to pick from is rather troubling,” Lair joked.

After four weeks in Taiwan, Lair remarked that the most attractive aspect of Taiwan is the night markets. He said he views night markets as the image that best represents Taiwan, as so many people and types of food can be found there.

Habchy, who was previously Sony’s imaging ambassador, said that what is surprising about Taiwan is that one can travel from the mountains to the sea in a single day. In addition, he praised Taiwan's people as friendly and its cities as dynamic, which is why he says he has visited the island a second and third time.

“Taiwan’s willingness to let strangers lodge at the office of the president is the most concrete, interesting, and original way of showing their hospitality,” Lair stated. The pair will be sharing more of their reflections on their social media pages, reported CNA.

The third-to-last stay as part of the event will see Palestinian-Israeli Nuseir Yassin, better known as Nas Daily, visit the Presidential Office Building. Yassin made headlines when he gave up his US$120,000 salary (NT$3.6 million) to travel, and he is now a famous content creator with millions of followers on multiple social media platforms.