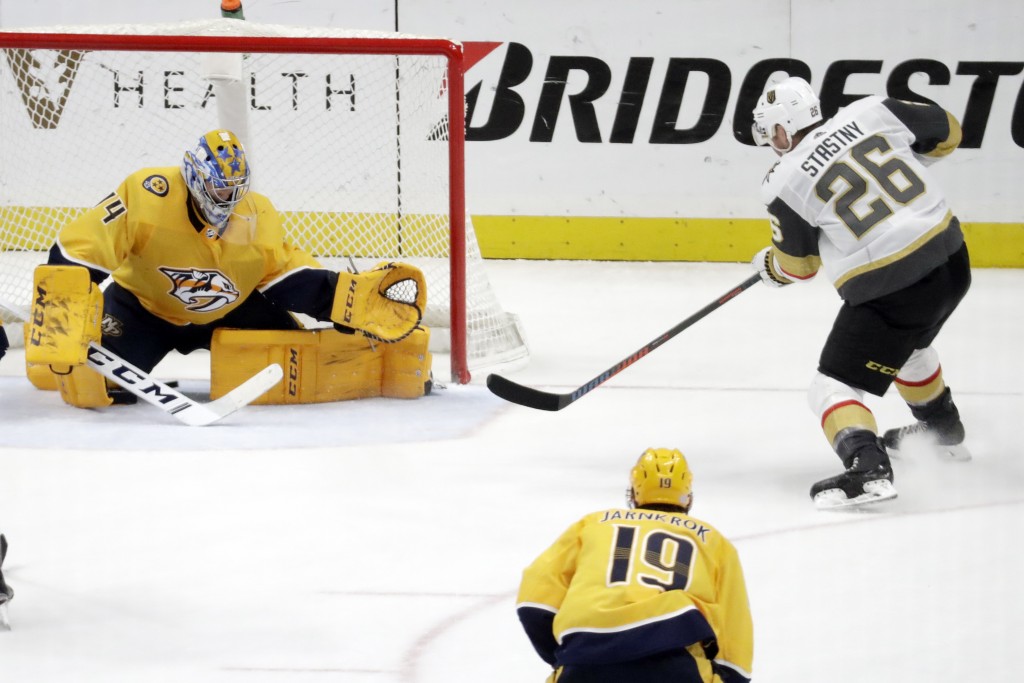 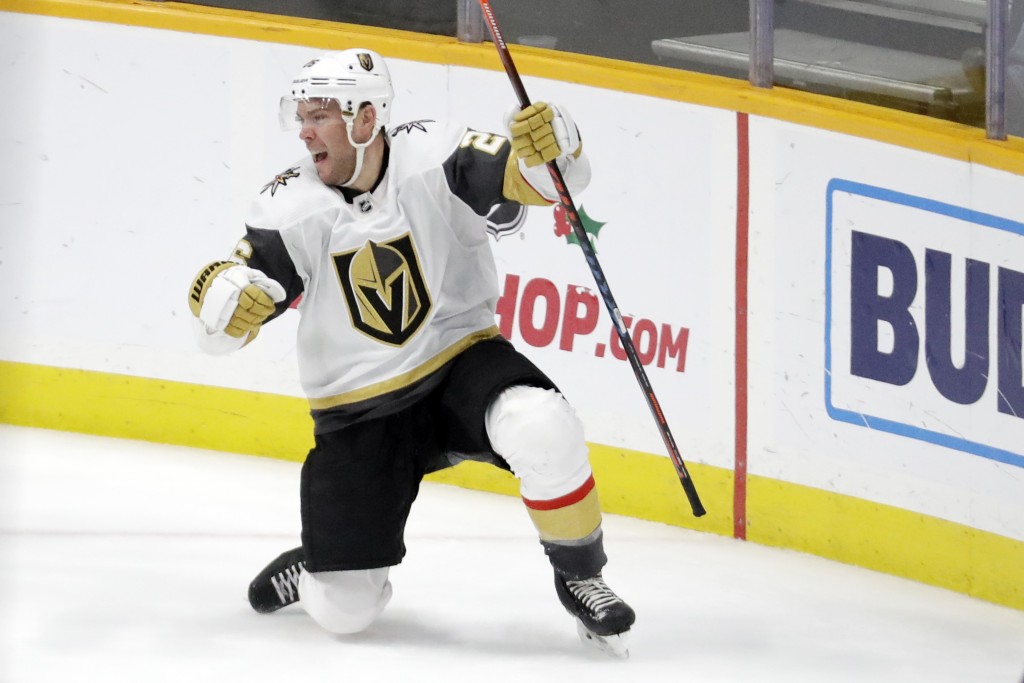 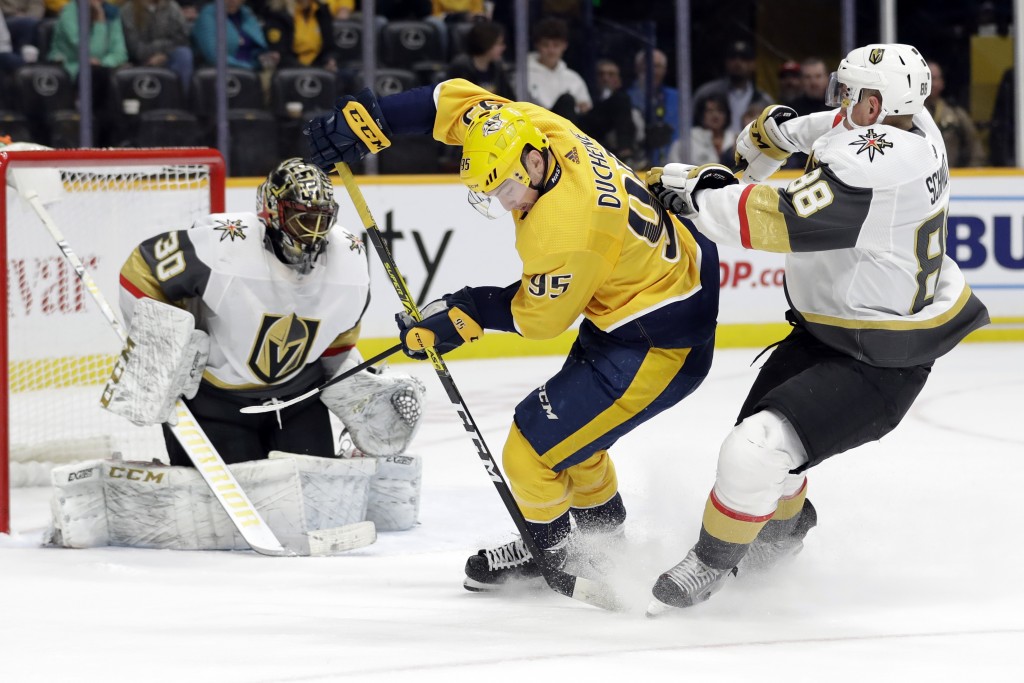 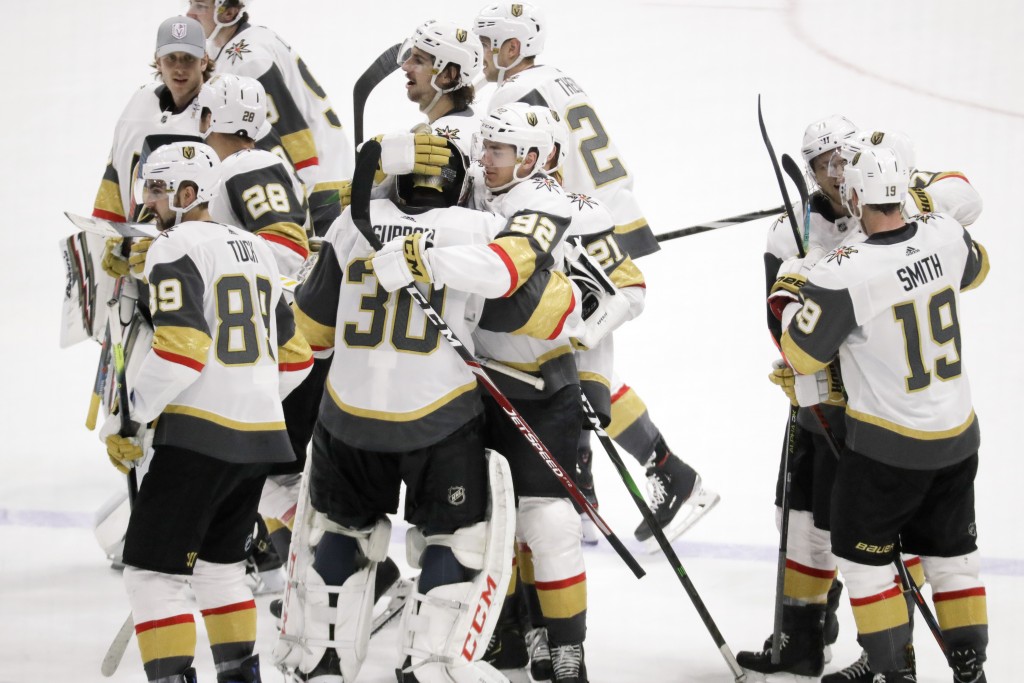 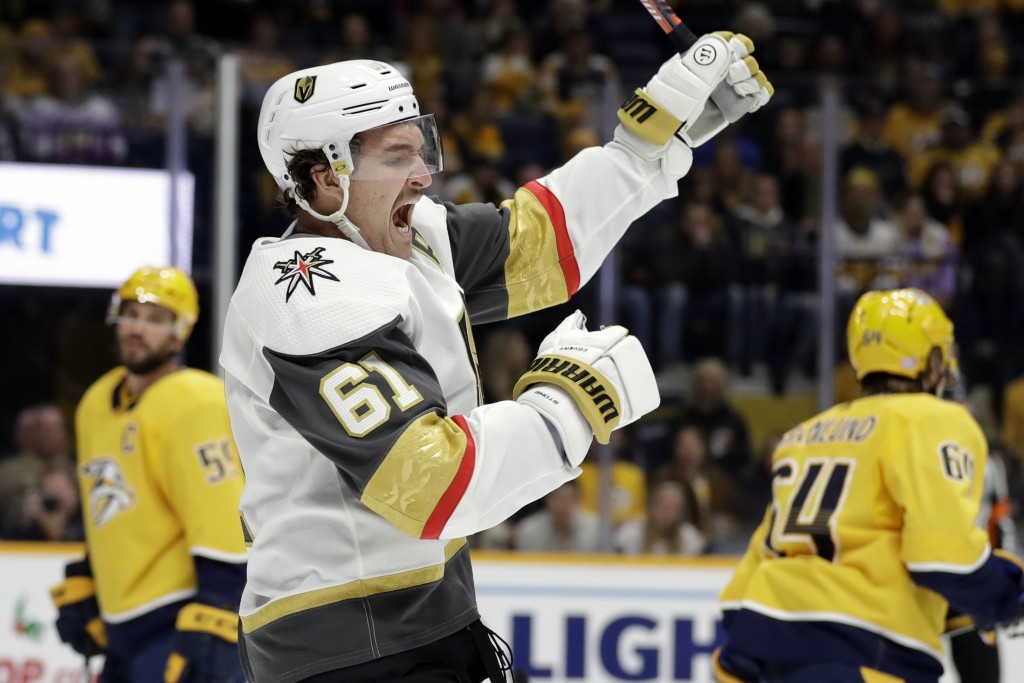 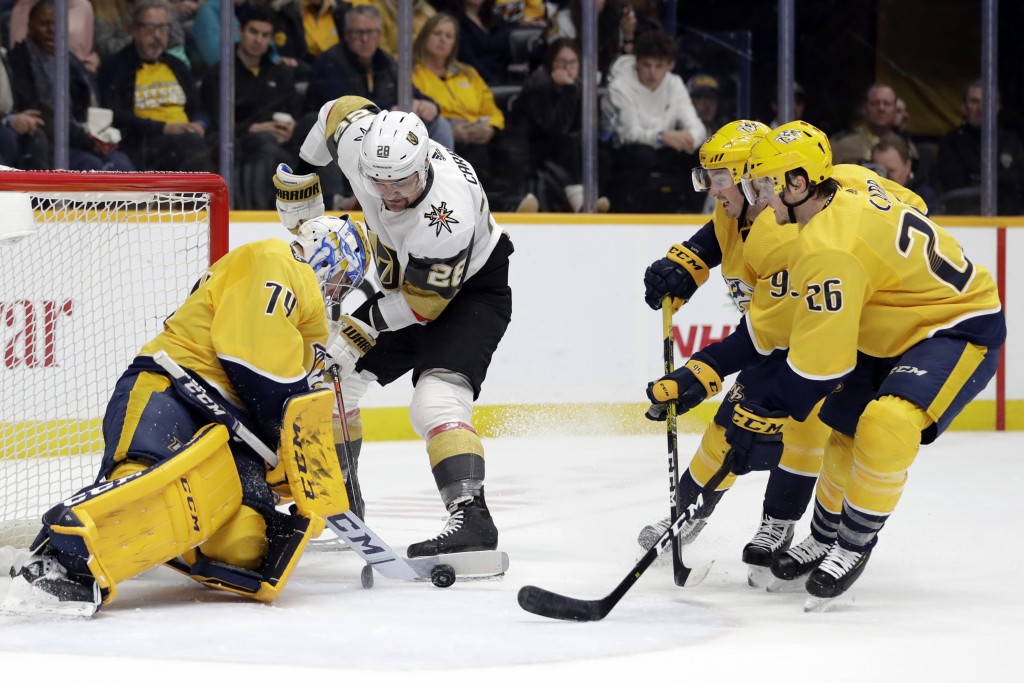 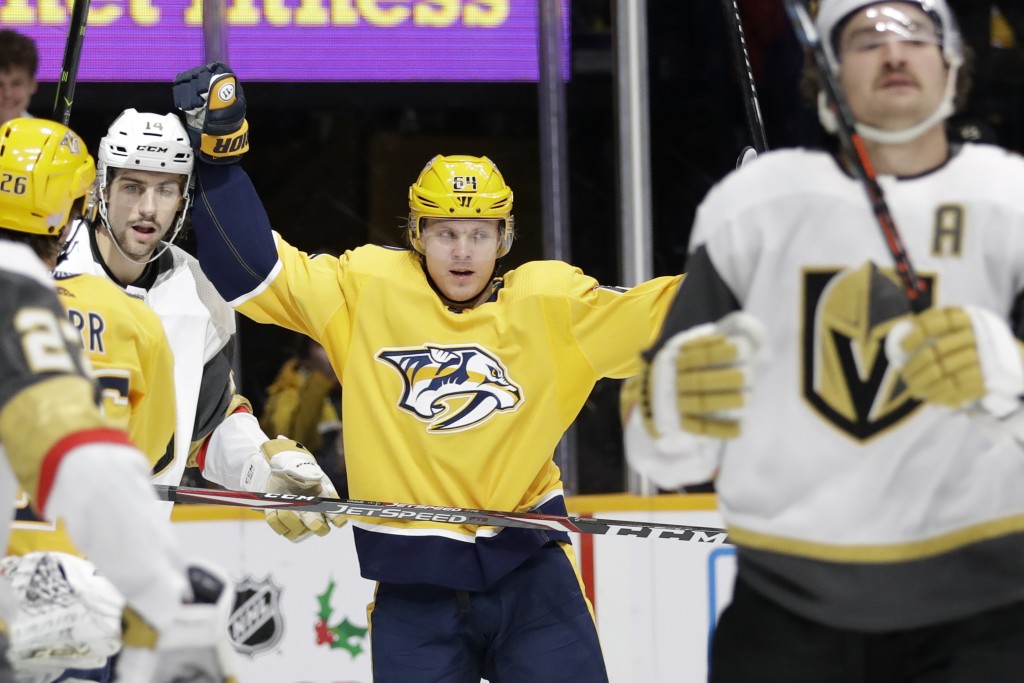 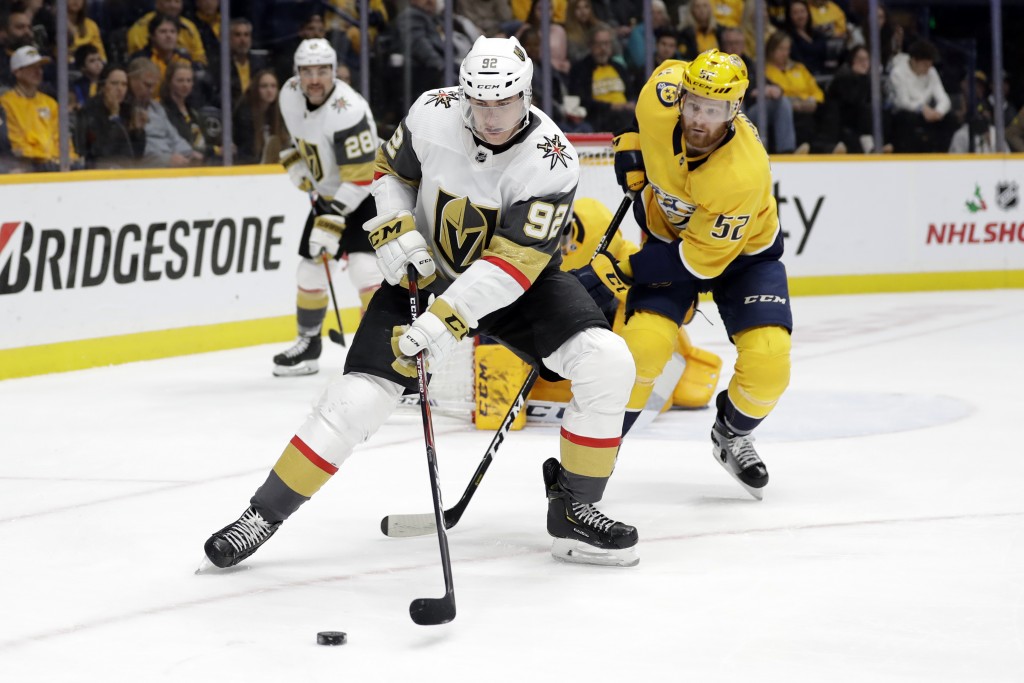 NASHVILLE, Tenn. (AP) — Max Pacioretty tied it with less than a second left in regulation and Paul Stastny scored at 1:52 of overtime to give the Vegas Golden Knights a 4-3 comeback victory over the Nashville Predators on Wednesday night.

Mark Stone, Reilly Smith and Pacioretty each had a goal and an assist for Vegas, which snapped a three-game losing streak. Malcolm Subban made 31 saves for his first win of the season.

Mikael Granlund and Matt Duchene both contributed a goal and an assist for Nashville. Ryan Ellis also scored and Roman Josi added two assists for the Predators.

In overtime, Nate Schmidt intercepted Calle Jarnkrok’s pass and went in on a 2-on-0 break on Nashville goalie Juuse Saros. Schmidt fed a cross-ice pass to Stastny, who buried a one-timer for the winner.

Nashville appeared to have a regulation victory in hand, but Pacioretty scored with 0.3 seconds remaining in the third period to send the game to overtime.

Early in the third and with the game tied at 2, Granlund wired a wrist shot from the high slot inside the near post for his seventh goal of the season.

Stone scored the first goal of the game at 7:33 of the opening period.

From the goal line to the right of the Nashville net, Pacioretty used a soccer-style kick to direct the puck to Stone in the lower part of the left circle. From there he was able to beat Saros high to the glove side.

A pass from Schmidt sent Smith in on a breakaway as he slipped behind Predators defenseman Dante Fabbro. From the slot, Smith beat Saros with a backhand between the pads.

Josi drove the puck down the right side and found Granlund in the low slot, where his quick redirection beat Subban through the legs.

Deep in the Vegas zone, Josi’s pass came to Ellis on the right side. After drawing Subban his way with a fake, Ellis switched to his backhand and slid the puck into the open net.

Saros made 26 saves in his third consecutive start.

NOTES: Nashville C Kyle Turris was a healthy scratch for the fifth consecutive game. ... Vegas is 1-1-2 when tied after two periods. ... The Golden Knights are 2-4-1 against Central Division opponents. ... Vegas has not scored a power-play goal in its last four games.

Predators: At the Carolina Hurricanes on Friday.