TAIPEI (Taiwan News) — German’s second-largest electricity producer RWE is considering making inroads in Taiwan as part of its plans to increase its presence in Asia.

RWE, which supplies electricity to more than 20 million primarily European customers, has been expanding its renewable energy output over the years. With the acquisition of utility company E.ON’s renewable energy assets in September, the German company has emerged as the world’s second-largest offshore wind operator, with plans to inject 1.5 billion euros a year into wind, solar, and storage capacity, wrote Windpowermonthly.

RWE is now shifting its focus to Asia, said CEO Anja-Isabel Dotzenrath of the company’s renewable energy department. In pursuit of its offshore wind ambitions, it has entered partnerships with Japanese businesses and expressed interest in Taiwan, South Korea, and India, wrote CNA.

Possible collaborations with partners in the new markets would include acquisitions, she said, adding that the company is especially keen on projects in the early stage of their development.

Asia has become a new attraction for offshore wind companies, with one wind farm having just been inaugurated in Taiwan’s Miaoli County earlier this month. The project is a joint venture involving firms from Taiwan, Denmark, the U.K., and Japan, reported CNA.

On Nov. 15, the U.K. Renewable Energy Committee in Taiwan was established in Taipei, signaling deepened ties between the two countries in the development of renewable energy. President Tsai Ing-wen (蔡英文) has set the objective of boosting the island’s renewables to 20 percent of the total energy supply by 2025. 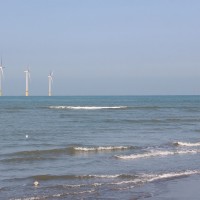