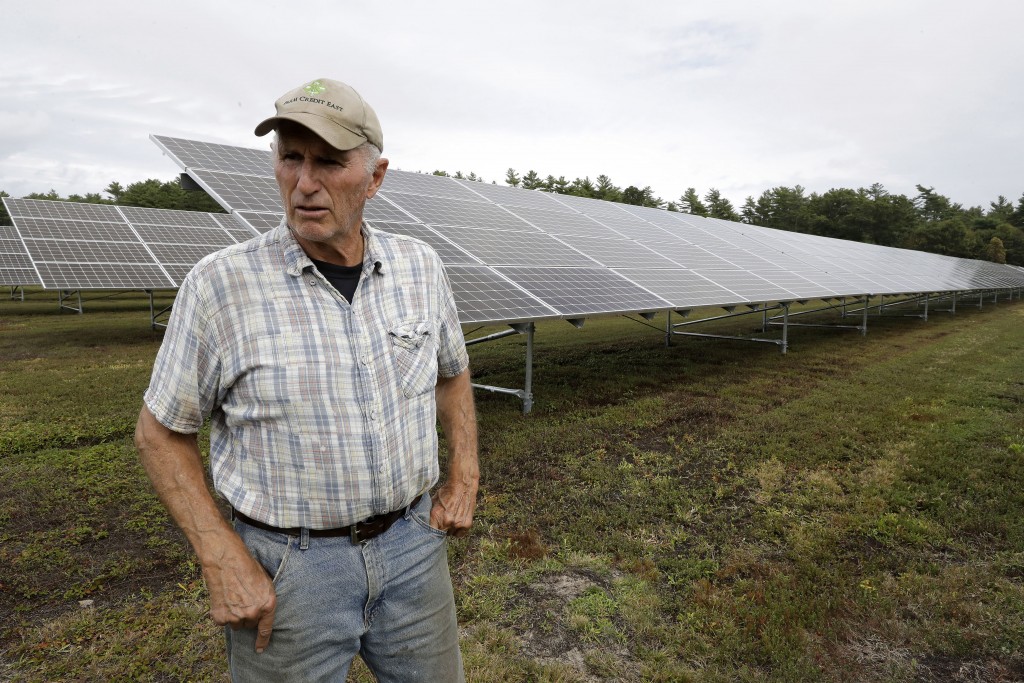 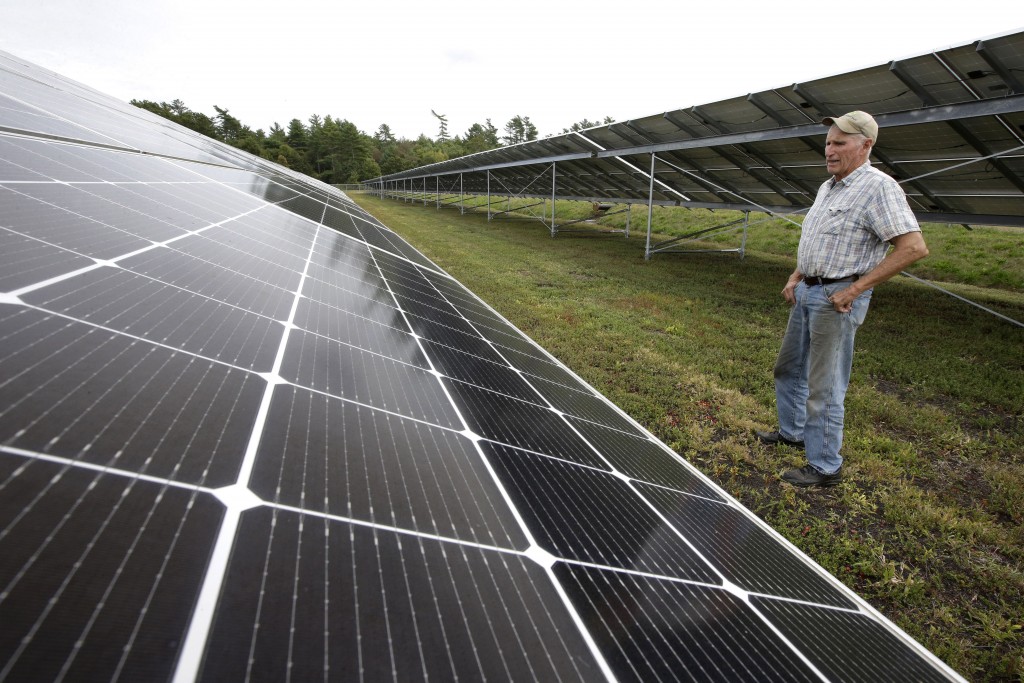 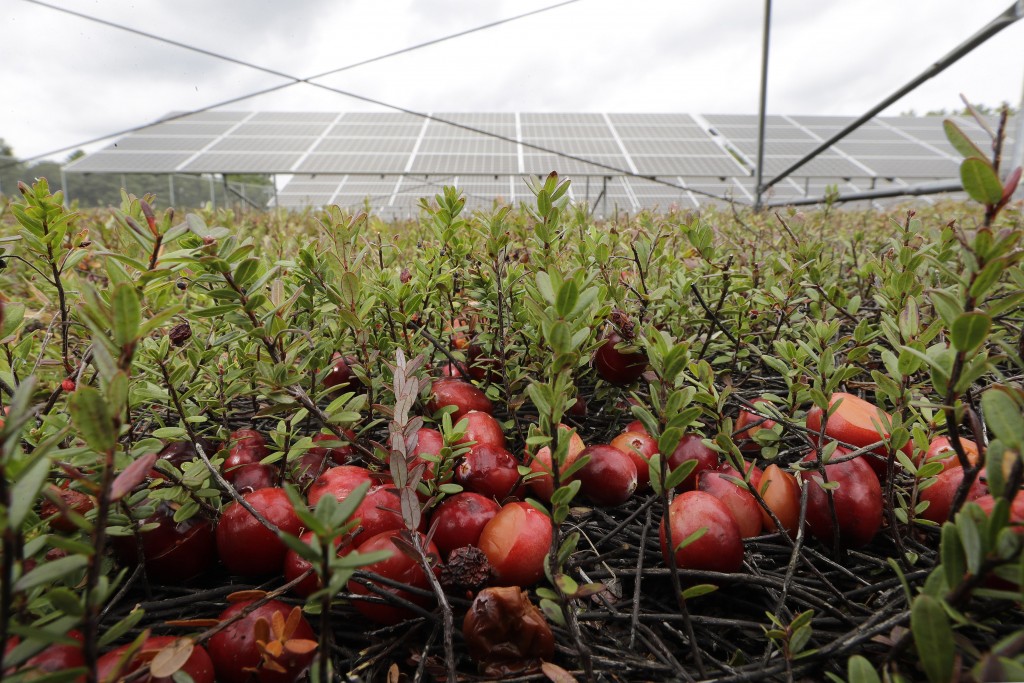 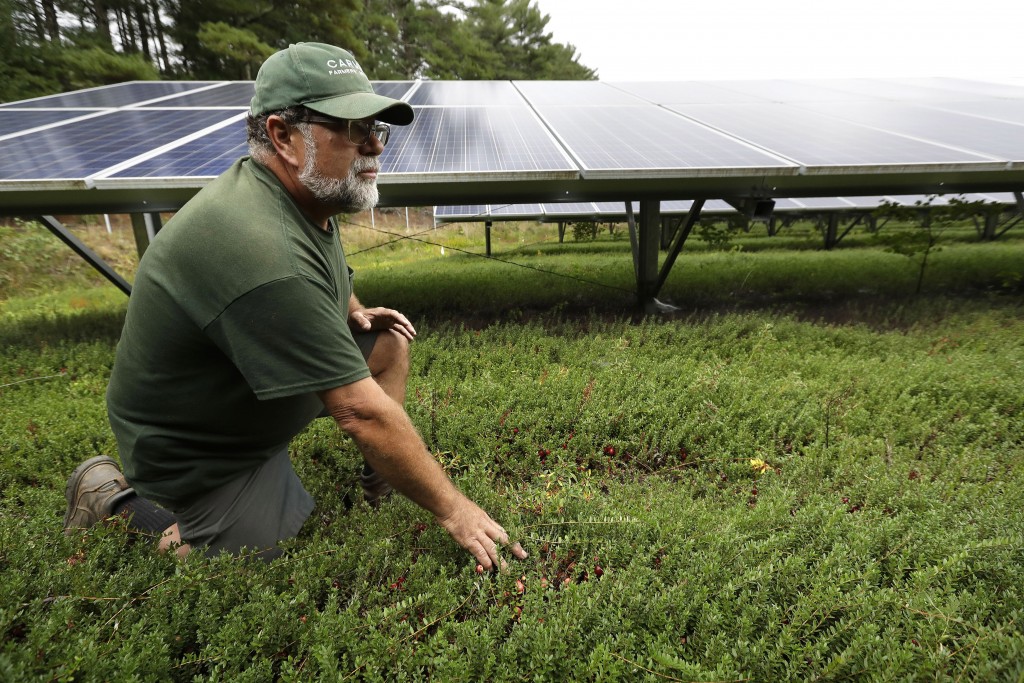 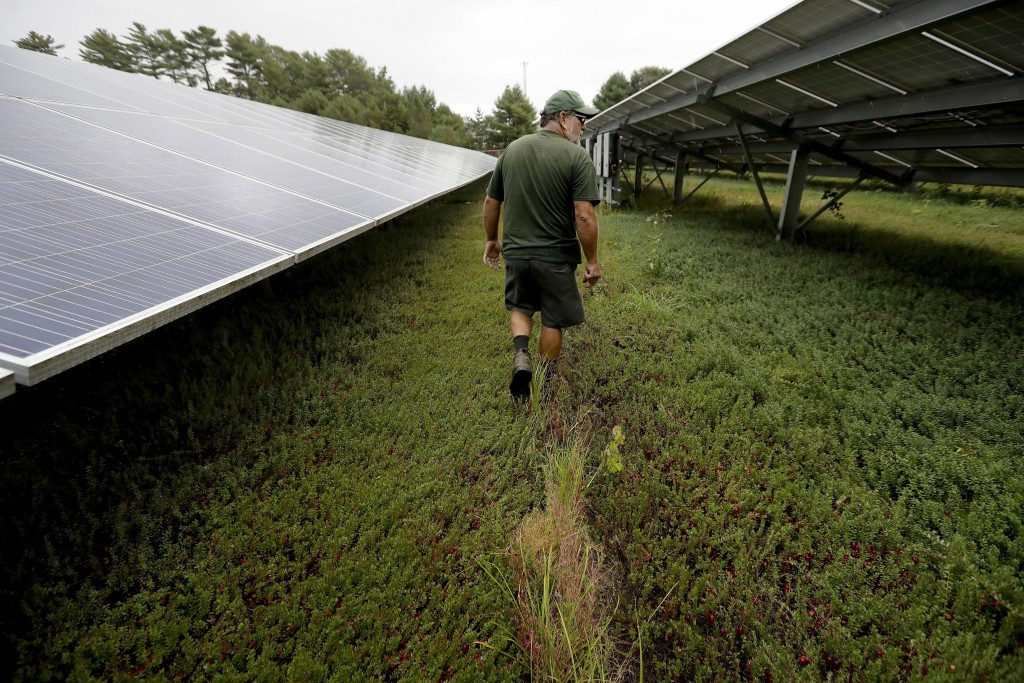 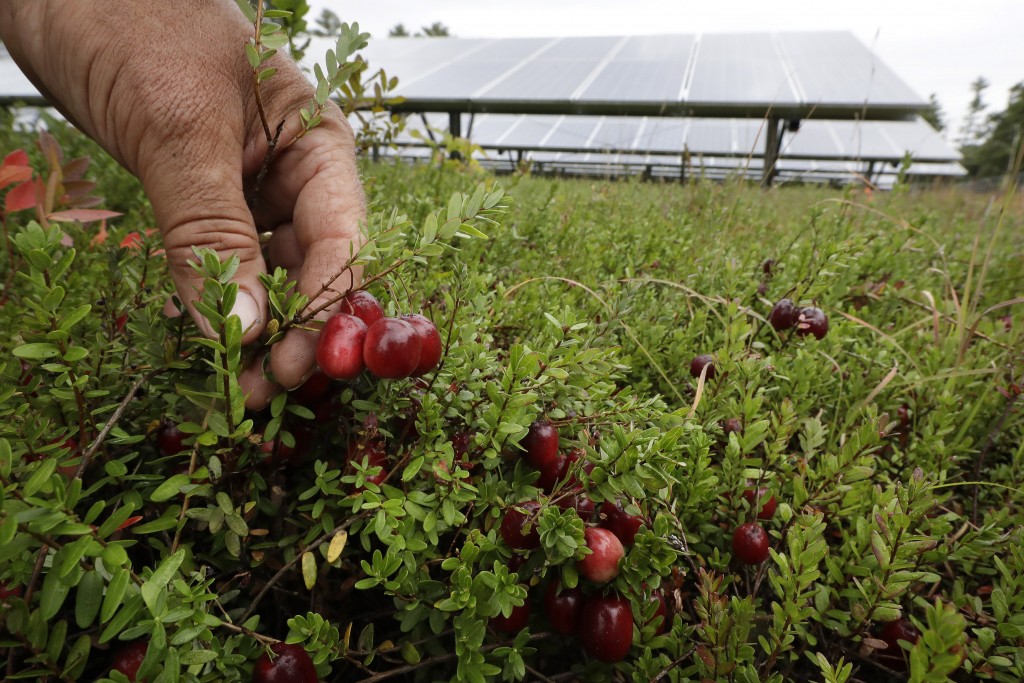 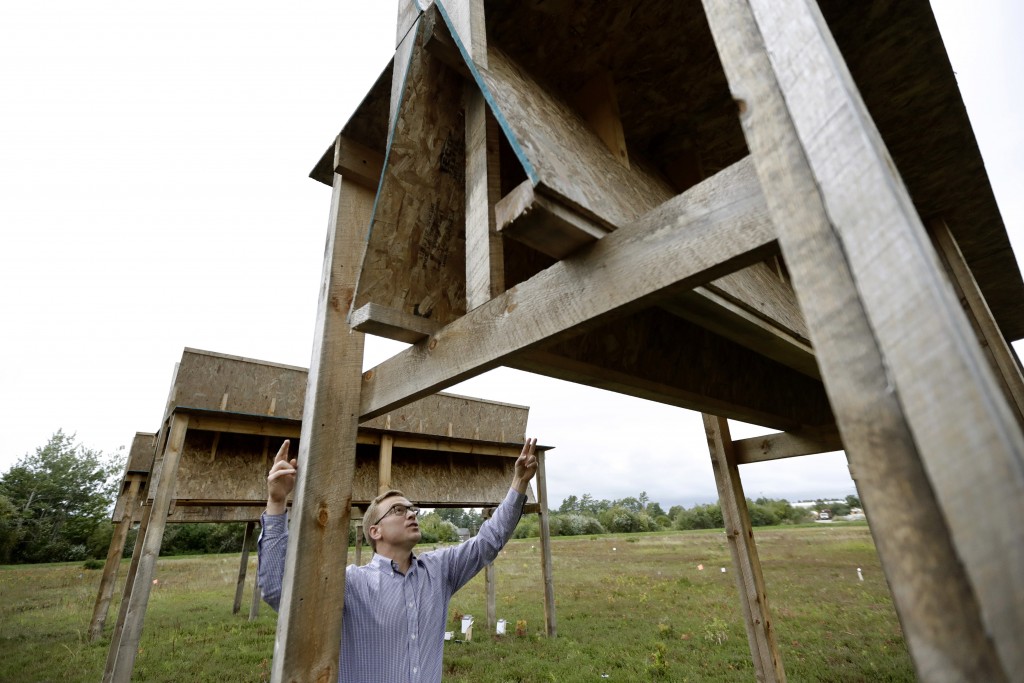 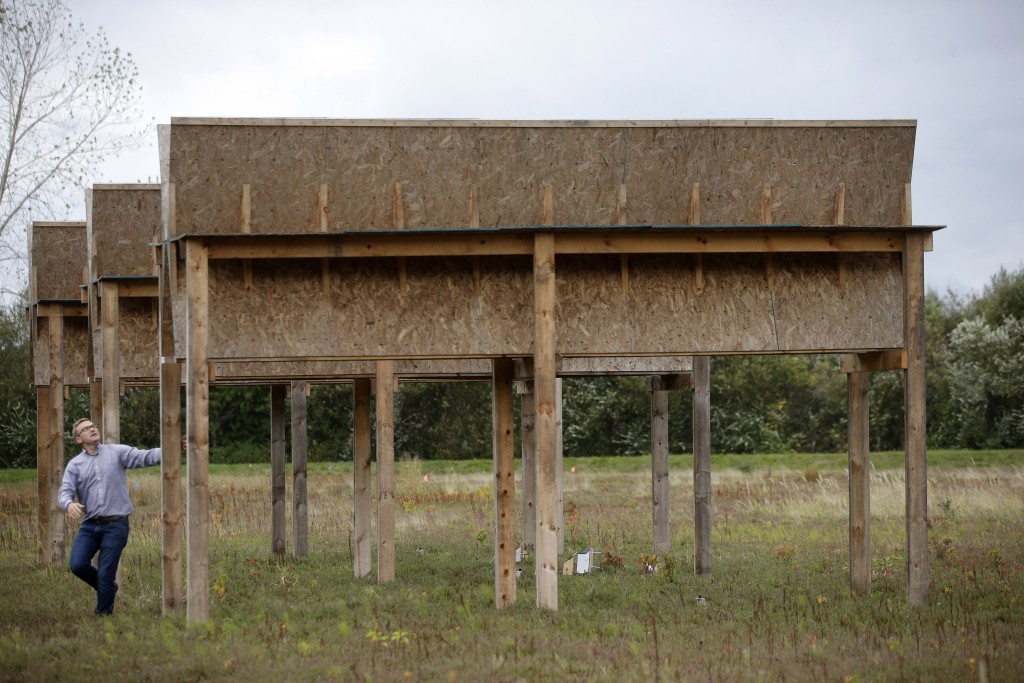 Some cranberry farmers in Massachusetts, the nation's second largest grower after Wisconsin, are proposing to build solar panels above the bogs they harvest each fall.

It's a novel approach to blending renewable energy technology with traditional farming that has been researched across the world but not tried before on large-scale, commercial crop cultivation, according to solar power and agricultural industry experts. The basic idea is to build solar arrays high enough off the ground and in more spaced-out clusters to allow for crops to be safely grown and harvested underneath.

Cranberry farmers hope to shoulder lean times for their industry by gleaning extra revenue — in the form of long-term land leases with solar developers — while still producing the same quality berries they have for generations. An ongoing, nationwide study also suggests certain crops in particular climates can thrive under solar panels, though it's unclear at this point how cranberries will fare.

Michael Wainio, a fourth-generation cranberry farmer, said he has sold off parts of his land, started a side business harvesting bogs for other growers, and launched a farm stand, deli and bakery operation in recent years to make ends meet.

"We're doing everything we can to diversify, and it's not enough," he said. "If we don't get this, I'd be surprised if we made it five years."

Wainio is working with developer NextSun Energy on a project calling for roughly 27,000 solar panels over about 60 acres (24 hectares) of active bogs across three farms in Carver, near Cape Cod. The project would produce about 10 megawatts of energy, or roughly enough to power more than 1,600 homes, according to NextSun.

The cranberry industry has been dealing for years with the combined effects of crop surplus and weakening demand for one of its primary products, cranberry juice, said Brian Wick, executive director of the Cape Cod Cranberry Growers' Association.

The price of cranberries has plummeted 57% over the last decade, from roughly $58 a barrel (about 100 pounds) in 2008 to $25 in 2018, according to U.S. Department of Agriculture data. But Wick says the cost to produce the tart red berries in Massachusetts is nearly $35 a barrel.

The USDA permitted industry to dump millions of pounds of fruit in 2017 and 2018 in order to stabilize prices, but the country's ongoing trade disputes with Europe and China are further compounding the struggles for an industry that previously exported about 30% of its product, Wick said.

"What we like about these new solar projects is that they have a farm-first mentality," he said. "This is an opportunity to keep the industry going. This isn't about replacing farms with solar."

In Massachusetts, cranberry growers and their solar partners are hoping to take advantage of a new renewable energy incentive meant to encourage such "dual use" solar and agriculture projects, as the state refers to them.

To qualify, arrays must meet certain design requirements, such as being built at least 8 feet (2.4 meters) off the ground. The projects also must provide an annual report demonstrating the land under the panels remains agriculturally productive.

At least one proposal has received state approval, a handful of others are under review, and more are pending before local authorities or are in earlier stages of development, say state and cranberry industry officials.

Dual use projects have proven successful on livestock farms in Europe and the U.S., and hundreds of projects have been built on crop farms in Japan, though all those are vastly smaller than what's being proposed on Massachusetts cranberry bogs, said Jordan Macknick, an analyst at the federal National Renewable Energy Laboratory in Colorado who is coordinating a nationwide study on "agrivoltaics," as the idea is sometimes referred.

The impact on crop cultivation in different environments is still being researched, he said.

In a study published in September in the academic journal Nature Sustainability, researchers at the University of Arizona found that cherry tomatoes grown under solar panels in the hot desert landscape produced higher yields and required less water.

But ongoing trials at a related site run by the University of Massachusetts have so far found that broccoli, kale and peppers are less productive growing under solar panels in the more temperate New England climate.

Other University of Massachusetts researchers are also beginning to assess the potential impact on cranberries. They erected large wooden structures meant to mimic the shading of a solar panel array on one of Wainio's bogs this summer.

On a recent visit, countless berries could be seen growing under the structures, but researchers said they'll need to assess their quality and yield when they're harvested.

Giverson Mupambi, a UMass cranberry expert involved in the effort, said one key factor they'll examine is color. The fruits need to achieve a bright red hue to be sellable, and sunlight is generally needed to achieve that color.

Property owners living near one of the proposed projects, meanwhile, have formed an opposition group and argue the state should proceed cautiously because the long-term environmental impacts of such large-scale projects are still unknown.

Those concerns and others have prompted the state to propose scaling back the size of projects allowed under its new incentive, among other new requirements. Solar developers say the proposed measures would make many projects financially infeasible.

And at least one major player in the cranberry industry remains lukewarm on the new approach to solar power.

The company already has seven solar arrays across its 12,000 total acres (4,856 hectares) though those systems were built years ago on land not used for cranberry growing, she said.

"We think dual use might be a better fit for other types of agriculture," Burke said. "If you think about a cranberry bog, it's way out in the open, and that's for a reason. It needs sun."