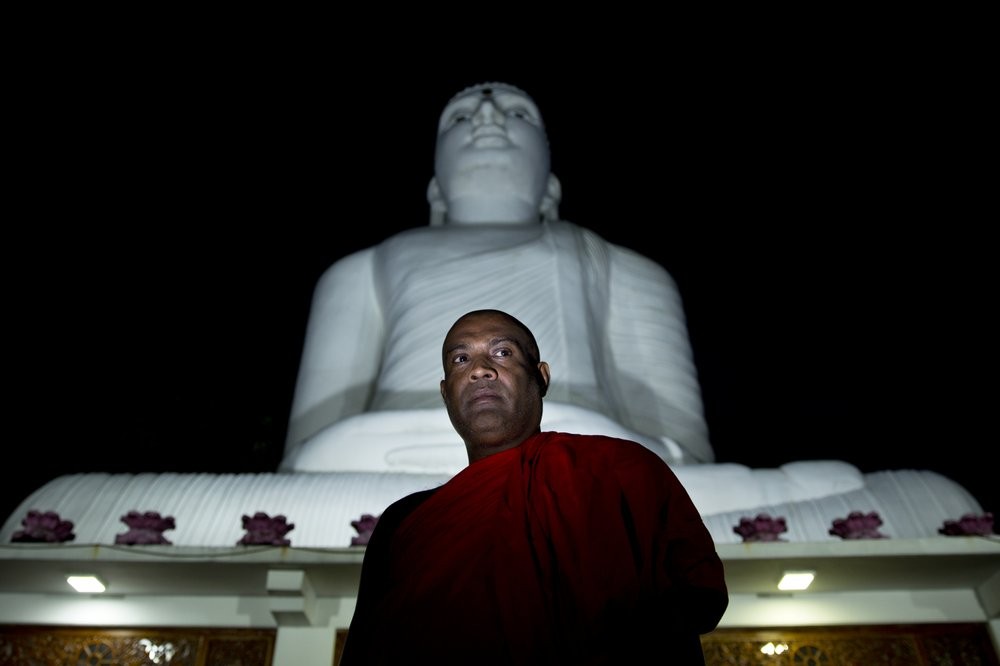 In this mountain city that was for centuries home to Sri Lanka’s kings and in recent years has been riven by religious violence, Buddhist nationalists are rejoicing the election of the country’s newest leader. They hope he ushers in another golden era for the nation’s ethnic majority.

“We built an ideology that the country needs a Sinhala leader who does not bend down in front of minorities,” said Galagoda Aththe Gnanasara, a nationalist leader and monk, referring to the Sinhalese ethnic group. “Now that ideology has won.”

Gnanasara and other members of his Bodu Bala Sena, or Army of Buddhist Power, campaigned hard for new President Gotabaya Rajapaksa. Rajapaksa is a former defense official who is regarded by fellow Sinhalese Buddhists as a hero for his role in ending Sri Lanka’s 26-year civil war with ethnic Tamil rebels. But minorities fear him because of allegations he took part in war atrocities and ordered state-sponsored disappearances.

With the day-to-day violence of the civil war in the past, Buddhist nationalists in recent years have accused the government of paying too much heed to the needs of minorities, pointing in part to the previous government, which though led by Sinhalese Buddhists, also included ministers who were Hindu and Muslim.

About 70% of the 22 million people in this island nation off India’s southern coast are Buddhists, mainly ethnic Sinhalese. Hindus, mainly ethnic Tamils, make up 12.6% of the population, while another 9.7% are Muslim and 7.6% are Christian.

The days of Sri Lanka’s Buddhist kings and their monk advisers ended in the early 1800s with their defeat by the British, who ruled until independence in 1948. And though Buddhism was given predominance in Sri Lanka’s post-independence constitution, freedom to practice other religions was also enshrined.

Nevertheless, Buddhist nationalism has been on the rise, and it was thrust to the forefront of Sri Lankan politics after Islamic State-inspired suicide attacks by local militants killed 269 people at churches and hotels on Easter Sunday.

Rajapaksa, often appearing alongside Buddhist monks, would refer to the attacks while campaigning and cast himself as the only person able to restore security. And now that he has won, nationalists like Gnanasara want him to promote Sinhalese culture at the expense of Muslims, such as getting rid of Islamic religious schools.

“Halal, burqa, Islamic banks, Kathi courts, Shariah universities, those all destroyed social integrity that we do have,” he said in an interview. “Gotabaya can establish one rule, one nation, one country.”

At his swearing-in earlier this month, Rajapaksa said he would be president for all Sri Lankans.

“I am well aware that I am bound to serve every Sri Lankan irrespective of race or religion,” he said.

There is doubt about that among the Muslims of Kandy, a city dotted with lakes and surrounded by dense mountain jungles that is home to Buddhism’s venerated Temple of the Sacred Tooth. Muslims here speak in hushed tones about what Rajapaksa’s rise to power could mean in a place that even before the Easter attacks saw deadly mob violence aimed at them.

“We have a fear that Muslims can be attacked again,” said Fazal Samsuddeen, an Islamic preacher.

Samsuddeen’s brother, 23-year-old student Abdul Bazith, was one of two people killed in March 2018 violence in Kandy that was retaliation for the death of a Buddhist truck driver beaten up by four young Muslim men.

Bazith died of smoke inhalation after a Buddhist monk-led mob tossed a gasoline bomb into his family home, sending it up in flames.

“Sections of the Sinhala people have understood us wrongly and think that Muslims are cruel and must be eliminated,” Samsuddeen said.

The rise in religious nationalism and the conflict with Muslims has been seen in other Buddhist-majority nations. In Myanmar, mob violence set off by the rape and murder of a Buddhist woman and fueled by rumors and hate speech on social media has spiraled over the years into a military-backed campaign of death and destruction against Rohingya Muslims that the United Nations has called genocide. Hundreds of thousands of Rohingya have fled the country.

In Myanmar, like Sri Lanka, there is a view among nationalists that Muslims are an existential threat to their faith and way of life, despite Buddhists being the overwhelming majority. Buddhist nationalists often point to the actions of terror-linked extremists in Islam to justify their views, which are then spread on social media by their own extremists.

“They have the intention of making this a Muslim country. They are working toward that, but we can’t let that happen,” said Yatawatte Dhammananda, a monk and Bodu Bala Sena organizer in Kandy.

“This is a fast-vanishing race in the world,” he said of Sinhalese Buddhists. “It is our duty to protect it.”

Several moderate Buddhist monks in Sri Lanka have spoken out against extremist voices within their ranks, and Gnanasara and other nationalists have tried to distance themselves from the violence. Nevertheless, their influence is clear.

After the Easter bombings, an outspoken Buddhist monk and member of Parliament, Athuraliye Rathana, began a fast in front of the Sacred Tooth temple demanding the resignation of a Muslim Cabinet minister in then-President Maithripala Sirisena’s government and two Muslim governors he accused of having links to the attacks.

Gnanasara himself was a beneficiary of the upsurge in nationalism after the attacks. Not long after, 10 months into a six-year sentence for contempt of court, he received a presidential pardon. He went to Kandy to join Rathana, whose fast ended on its fourth day with the resignation of all nine Muslim Cabinet ministers and the two governors.

All 11 were eventually cleared of any links to the attacks and returned to their posts.

Sirisena chose not to run for re-election, setting up a showdown in the Nov. 16 vote between the candidate from the governing party and Rajapaksa.

Muslims largely perceived that security forces directed by Sirisena were ignoring or even taking part in mob violence that followed the Easter attacks and killed one person and left 20 mosques burned. But at the polls they still voted overwhelmingly for the governing party candidate over Rajapaksa.

“Muslims feel very insecure, they feel a sense of (being) under threat and worst of all, a lack of confidence in the state’s ability to protect them,” said Farah Mihlar, a Sri Lankan Muslim who lectures about justice and religion at the University of Exeter.

She said there is now a dilemma for Muslim boys.

“They’re angry; there’s a sense of resentment building up,” she said. “They strongly rejected organized militancy but feel they must do something to protect themselves.”

Outside recent Friday prayers at the 500-year-old Grand Mosque of Colombo, businessman M.S.M. Zaneer said antagonism against the country’s Muslim community wasn’t new, but it had grown more virulent since the Easter attacks.

He said he and his fellow worshippers lived in fear of a repeat of violence in which Buddhists have looted and set fire to mosques.

“I can say they are terrorists as well,” he said.