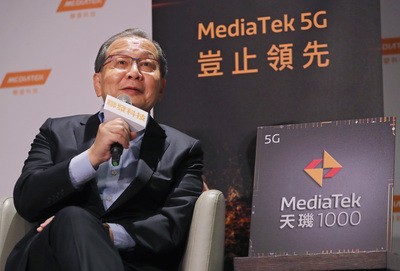 MediaTek Inc., the largest integrated circuit designer in Taiwan, will see 20 percent sales growth in 2020 on the back of new 5G chips, a U.S. brokerage forecast Wednesday.

In a research note, the U.S. securities house projected MediaTek's 2020 sales at NT$300 billion (US$9.84 billion), which would be about 20 percent higher than the company's expected sales in 2019.

The forecast came after MediaTek unveiled the Dimensity 1000 chip, the first 5G system-on-chip (SoC) in its Dimensity mobile SoC family, in both Taipei and Shenzhen on Tuesday.

Analysts said the choice of Shenzhen to introduce the Dimensity 1000 chip showed MediaTek has set its sights on the Chinese market, with Chinese smartphone brands such as Xiaomi and OPPO customers for the new chip.

"Our Dimensity series is a culmination of MediaTek's investment in 5G and positions us as a leader driving 5G development and innovation. Our 5G technology goes head-to-head with anyone in the industry," MediaTek President Joe Chen (陳冠州) said in a statement.

The new 5G chip uses the advanced 7 nanometer process of Taiwan Semiconductor Manufacturing Co. (TSMC), the world's largest contract chipmaker, and products using the new chip are expected to hit the market in the first quarter of 2020.

According to the U.S. brokerage, the Dimensity 1000 is twice as fast as both the Kirin 990 chip of HiSilicon Technologies Co., an IC design arm of China's Huawei Technologies Inc., and Samsung Electronics Co.'s Exynos 980 chip.

MediaTek's new 5G chip also has specifications closer to Qualcomm Inc.'s Snapdragon 5G chips, according to the brokerage, which CNA cannot name because media outlets in Taiwan are not allowed to identify foreign brokerages when they give price-moving forecasts.

The Dimensity 1000 could trigger waves of smartphone replacements next year and boost MediaTek's revenue, the brokerage said, forecasting that the company will ship 60 million units of the new SoC in 2020.

MediaTek has invested NT$100 billion on 5G technology development with a team of thousands of research specialists based in Taiwan, Europe, India, the United States and Singapore, Tsai said.

Earlier this month, MediaTek announced it will team up with American semiconductor giant Intel Corp. to develop 5G chips for use in notebook computers.

Before Wednesday, when shares of MediaTek were up 0.48 percent at NT$422.00 on the Taiwan Stock Exchange as of 11:18 a.m., the stock had soared almost 34 percent since the beginning of the third quarter amid optimism over its 5G initiatives.