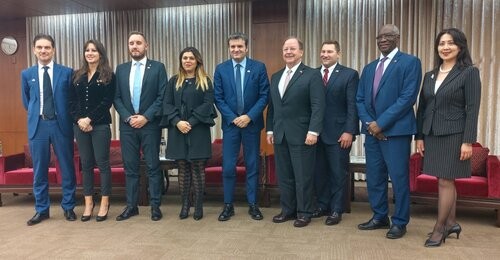 Visiting legislators from the United States and Italy urged the Taiwanese people Tuesday to defend democracy amid the worsening situation in Hong Kong.

"Democracy is a precious thing and we have to defend against any attempts to try to circumvent that through any sort of disinformation campaigns or fake news," U.S. Representative Bill Flores said in a press conference at the Ministry of Foreign Affairs (MOFA).

Flores said he has seen increasing threats against elections around the world, including efforts to upset the elections in Hong Kong few days ago.

He predicted continued efforts to interfere with the upcoming elections in Taiwan, citing the testimony of self-proclaimed spy Wang Liqiang (王立強), who is seeking asylum in Australia.

Taiwan will hold its presidential and legislative elections in January.

Meanwhile, Italian Senator Gian Marco Centinaio, leading a seven-member delegation on a six-day visit, said he and other Italian legislators are "deeply concerned" about the recent developments in Hong Kong.

"Taiwan will hold its presidential elections in a few months. We hope that democracy and freedom can be upheld in Taiwan," Centinaio said, adding that they should not be compromised.

The former Italian minister of agriculture also said that Taiwan should not be excluded from participation in international organizations, especially with regard to climate change and health issues.

"No country's basic human rights should be restricted by other countries," Centinaio said.

Flores and his colleague Guy Reschenthaler also paid a courtesy call to President Tsai Ing-wen (蔡英文) earlier in the day.

Tsai told the visitors that the worsening situation in Hong Kong demonstrates the importance of joint efforts between Taiwan and the U.S. to defend democracy.

"As the strategic forefront of the Indo-Pacific region, Taiwan is the first line of defense for democratic values," Tsai said, adding that Taiwan will continue to strengthen its cooperation with the U.S. to further contribute to regional stability, prosperity and development.