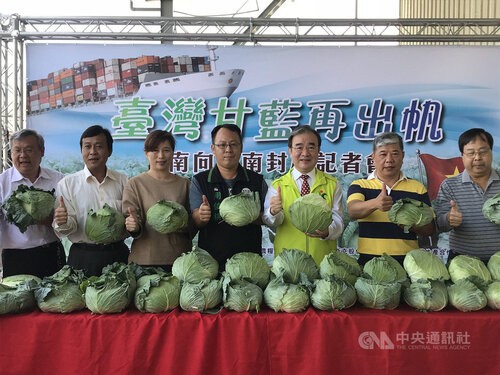 Taiwanese cabbage will officially enter the Vietnamese market next week, when the first shipment of 180 metric tons of the vegetable arrives in the Southeast Asian country, Agriculture and Food Agency Director-General Hu Jong-i (胡忠一) announced Monday.

The peak harvest time for Taiwanese cabbage is during the autumn and winter seasons and it is mainly exported to Japan, though markets have also been developed in Canada, Hong Kong and Singapore in recent years, with Vietnam the latest addition, Hu said at a ceremony marking the sealing of the shipping containers before their departure.

Indonesia is Taiwan's next target market, according to Hu.

Liao Chen-yi (廖振義), the head of an agricultural produce trading company present at the ceremony, said that his company mainly sold cabbage to Japan and Hong Kong but spotted new opportunities in Vietnam with its rapid economic development in recent years.

Two weeks ago, the company shipped 16 metric tons of cabbage to Vietnam on a trial basis, selling it for twice the price of Vietnamese cabbage, Liao said, adding that it has since received orders for nearly 10 full containers for the vegetable which is highly popular with ethnic Chinese in the country.

To keep the cabbage fresh, the company uses vacuum cooling technology to improve quality and prolong its shelf life for one month to enhance competitiveness, according to Liao.