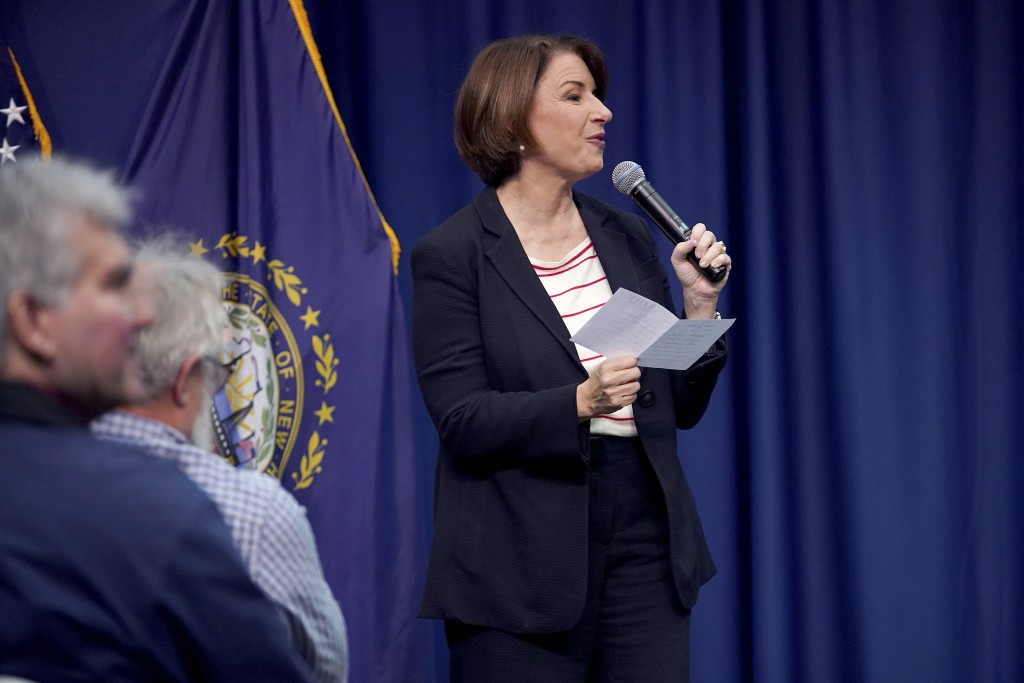 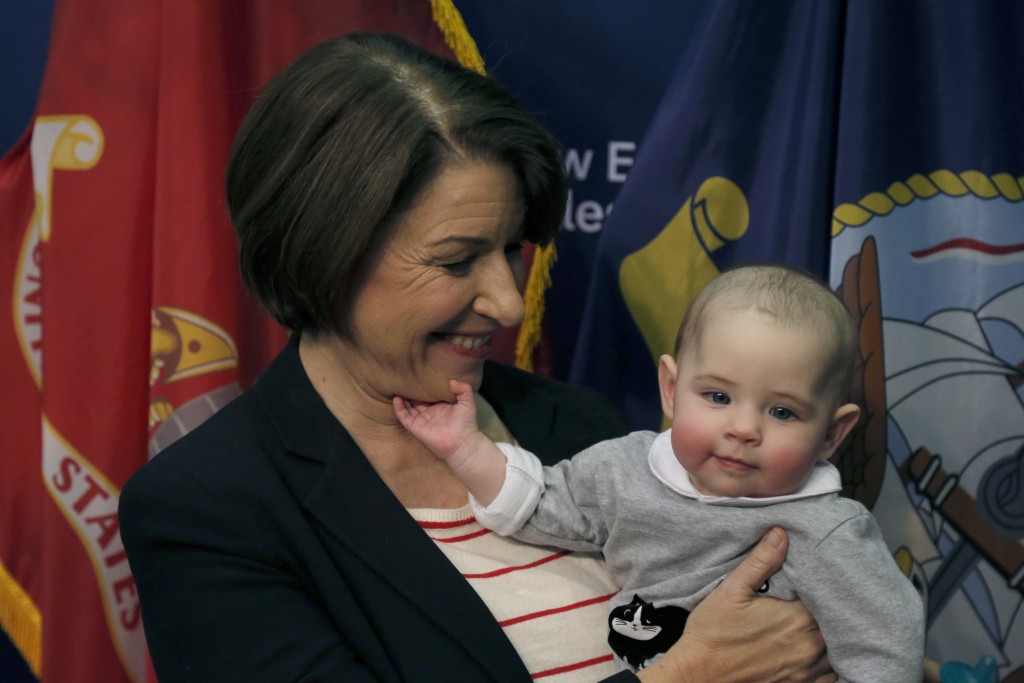 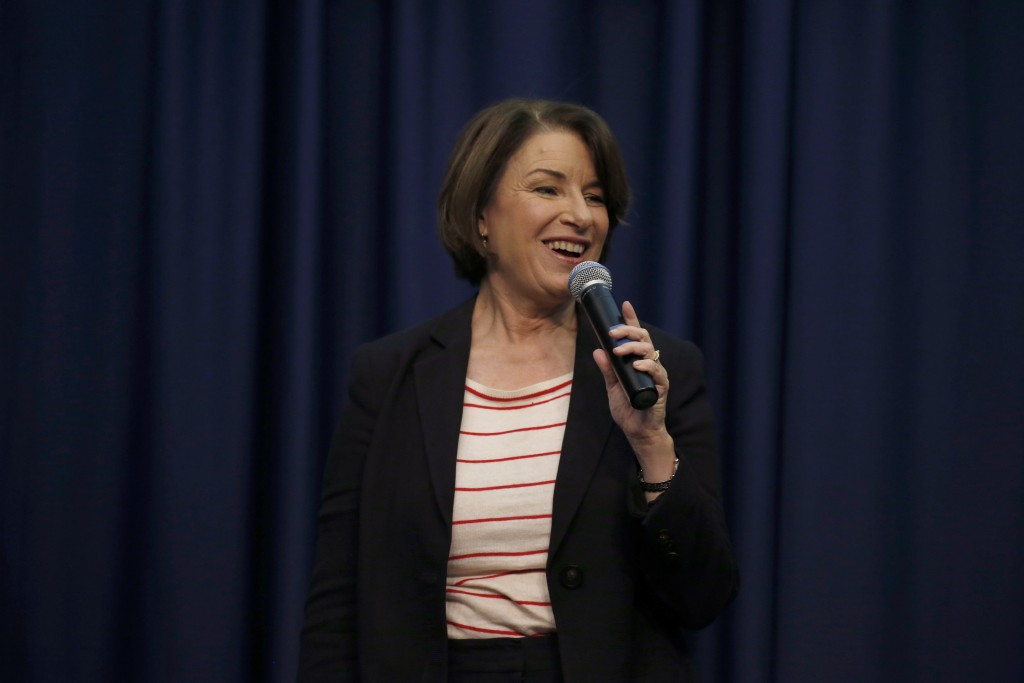 NEW LONDON, N.H. (AP) — Amy Klobuchar does not want to run for president as a “woman candidate.”

That’s never been the Minnesota Democrat’s style. But the media, public opinion polls and the addition of more men to an already crowded 2020 primary race led the three-term senator to a conclusion: Many Americans still aren’t comfortable with the idea of a woman in the Oval Office, and she needed to amplify the conversation about it.

So in interviews, on the debate stage and before overflow crowds at weekend town halls in New Hampshire, Klobuchar has been talking more pointedly about gender and politics — even if she’d rather be discussing her record of winning even in Republican areas, or the more than 100 bills she’s passed.

“Our people want to win. And if they think ‘Oh, can a woman really win?’ you gotta start discussing that. But it's not the theme of why I should win," Klobuchar said. "I want to run on my merits.”

President Donald Trump’s 2016 election sparked a new level of activism among women, who marched by the millions and ran for – and won – elections in record numbers. Female voters who abandoned Trump’s GOP, particularly in suburban areas, also fueled Democratic gains in longtime Republican places. Now Democrats see those voters as critical to unseating Trump in 2020.

And yet second-guessing by some Democrats about who can defeat Trump and the memory of Hillary Clinton’s 2016 loss have created an ever-present additional challenge for the record number of women seeking the party’s nomination. Of the six major female candidates who entered the race, only one — Massachusetts Sen. Elizabeth Warren — is polling among the four-person top tier. The one who ran most overtly as a feminist and mom, New York Sen. Kirsten Gillibrand, has dropped out.

The issue may be especially important at this stage of the race for Klobuchar, who’s polling in fifth place and has been battling two men with better poll numbers and more money — former Vice President Joe Biden and Indiana Mayor Pete Buttigieg — for the primary’s moderate lane.

And just as she’s been slowly but steadily gaining momentum in recent weeks, the competition got even tougher. Billionaire Michael Bloomberg entered the race Sunday as another moderate alternative to Biden. He’s spending $30 million on a round of TV ads – roughly double what Klobuchar raised in the first three quarters of this year.

Klobuchar was critical of Bloomberg’s decision to get in the race, but said her campaign is moving forward the way she has always operated – working hard, talking with voters and spending money conservatively to be sure she has enough to keep going.

She’s invested a significant portion of her time and money in Iowa, the first caucus state, and is adding New Hampshire staff at a time when some campaigns are cutting or redeploying them. Last week she announced new hires and her first office in Nevada, the third state to vote, and her campaign plans to announce new staff this week in South Carolina, site of the South’s first primary.

Meanwhile she’s tweaked her message to more directly address voters’ doubts, sometimes in subtle ways so as not to alienate those voters she says can be turned off by too much talk of being a woman. That’s a lesson she learned early in her political career, when Klobuchar watched others run as “woman candidates” who tried to make their gender a selling point — and lost.

In a TV interview and again at Wednesday’s debate she argued that a woman with the same resume as Buttigieg wouldn’t make the debate stage — adding that she believes the 37-year-old veteran and mayor of South Bend, Indiana is qualified to be president. She told debate viewers who wonder if a woman can beat Trump that House Speaker Nancy Pelosi “does it every day” — drawing thunderous applause from the audience.

In New Hampshire last weekend Klobuchar, who is 5 feet, 4 inches tall, talked about feeling short on the debate stage. She laughed about the talk of her hair moving during last week’s debate — the result, she said, of an air vent directed on her and not enough hairspray, adding “welcome to the life of a woman candidate.”

She peppered speeches about her record and her policy proposals with references to strong women, from Russia expert Fiona Hill and Ambassador Marie Yavonovitch testifying at last week’s impeachment hearings to New Hampshire’s two female senators and female governors elected last year in places like Michigan and Kansas.

“The message wasn’t about ‘Hey, elect me because I’m the first woman,’” Klobuchar said following an event at Colby-Sawyer College, where the crowd of several hundred spilled into an overflow room and out the front door. “The message was ‘Step back and think about what your image is of a president, because we're never going to get to that point of being the president, if you can't think of it differently.’ Because we don't look like, you know, Abraham Lincoln.”

Democratic strategist Adrienne Elrod, who was a senior adviser to Clinton’s 2016 campaign, said Klobuchar is “the perfect person to bring this up,” because she’s known for her pragmatism and Midwestern common sense, and because she isn’t a front-runner.

“The thing we all love about Amy is she’s authentic,” Elrod said. “She may tick off some people, but those are people who probably wouldn’t vote for her anyway. But we need to hear this message.”

Klobuchar’s remarks to a crowd Saturday in Lebanon, New Hampshire, were enough to convince retired children’s librarian Joanne Scobie. Klobuchar had been in her list of top three candidates, but Scobie had been hesitant to choose Klobuchar over Biden or Buttigieg because she feared other people might not support a woman. She left Saturday’s event committed to voting for Klobuchar.

“I think she would be great on stage with Trump,” Scobie said.

Her husband, Bob Scobie, wasn’t as confident that Americans would accept a female president. But he was “much, much, much more interested” after seeing Klobuchar speak in person.

But also lingering over Klobuchar’s campaign since before she joined the race in February have been reports that she has mistreated her staff. While Klobuchar has acknowledged she can be a tough boss, her supporters have argued the anonymous accounts are another example of sexism facing female leaders.

Julia Howk, 79, said those stories concern some of her friends. But after hearing Klobuchar speak at New England College in Henniker, New Hampshire, Howk said she found her to be down-to-earth, funny and smart.

She liked that Klobuchar isn’t promising things she believes are unrealistic, such as free college for all, and said it’s clear the candidate “speaks her mind,” which Howk also found appealing.

“I don’t think that (former President Lyndon) Johnson was a particularly delicate guy,” she added.

Others are not sold for reasons that have nothing to do with gender.

Ashley Babladelis and Audrey Redmond, both 33, said they’re more liberal than Klobuchar on issues such as health care and gun rights. That may mean they support Warren or California Sen. Kamala Harris instead.

“I’m very passionate about seeing a woman in the White House,” Babladelis said. “I don't know that Amy is that woman.”