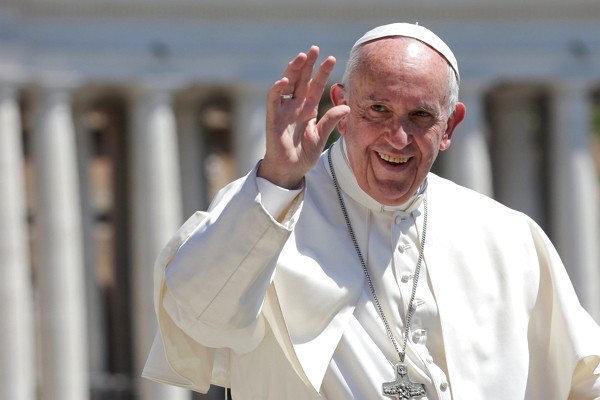 Pope Francis managed an airborne diplomatic dance by sending telegrams of greetings to the leaders of China, Hong Kong and Taiwan as he flew through their airspace on his way from Thailand to Japan.

Francis made sure not to offend Beijing in the telegrams Saturday, making no mention of the Vatican's continued diplomatic relations with self-ruled Taiwan or the Hong Kong pro-democracy protests, now in their sixth month, though he did appeal for "well-being and peace" in the semi-autonomous Chinese territory.

Papal protocol requires these telegrams be sent, and Francis has used them in the past to reach out to the Beijing government, which severed relations with the Holy See over five decades ago.

Francis has been eager to unite China's official and underground Catholic Churches, and the Vatican and China penned a 2018 accord over bishop nominations meant to heal the rift. But tensions still exist, and the Vatican's continued relations with Taiwan remain a sore spot.

"I send cordial greetings to your excellency as I fly over China on my way to Japan," Francis wrote. "I assure you of my prayers for the nation and its people, invoking upon all of you abundant blessings of peace and joy."

Francis followed up with a telegram to Carrie Lam, chief executive of Hong Kong.

"As I fly over your territory I extend my best wishes to your excellency and your fellow citizens," he wrote. "Invoking divine blessings, I pray that almighty God may grant you all well-being and peace."

Finally, Francis flew over Taiwan and in the greetings to President Tsai Ing-Wen, Francis said he sent "cordial greetings."

"Assuring you of my prayers for all the people of Taiwan, I invoke abundant divine blessings of peace," he said.

The Vatican is one of the last countries to maintain diplomatic relations with Taiwan, which China claims as its territory to be reunited by force if necessary.