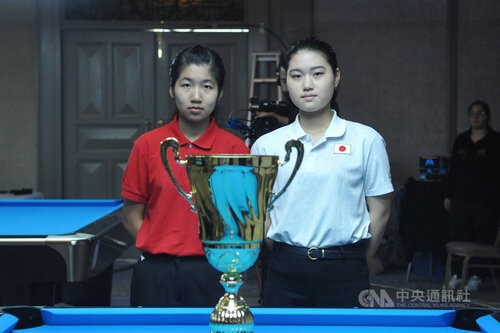 Lu, 17, a student at Juang Jing Vocational High School, won the championship by defeating Japan's Tamami Okuda 9-5 in the final.

The victory marks the second consecutive year for a Taiwanese to claim the girls U/19 title at the tournament. Last year, Chen Chia-hua(陳佳樺), from the same vocational high school, won the championship.

However, the title did not come easily for Lu. After she advanced to the second round, she was beaten by her South Korean opponent Seo Seoa 5-7.

Fortunately, she was able to cruise into the semi-final, during which she encountered Seo again but got off to a bad start, losing to Seo 3-7 initially before coming from behind and unleashing a powerful attack for a 6-0 win to advance to the final.

Lauding Lu as a highly talented player, her coach Chou Chieh-yu (周婕妤) said she has good coordination skills and works hard,practicing for at least five hours per day.