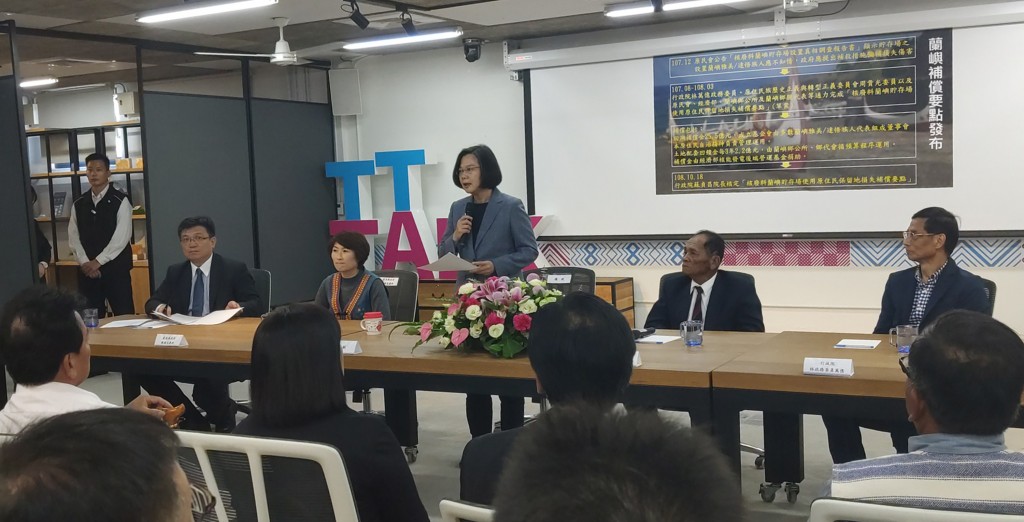 The MOEA subsidiary, State-Owned Enterprise Commission, said compensation of NT$2.55 billion (US$83 million), payable through the Nuclear Back-End Fund, would be a one-time retrospective grant for operation of the nuclear waste storage site on Lanyu between 1974 and 1999.

The ministry will help island residents establish a foundation responsible for the management and allocation of the billion-dollar compensation. This money can be used to fund long-term care, emergency rescue operations, economic development, infrastructure projects, education, or cultural programs.

In addition to the fund, Lanyu will continue receiving NT$220 million (US$7 million) of compensation for land use every three years — a practice started in 1974. An independent inquiry, led by Minister without Portfolio Lin Wan-i (林萬億), into the Lanyu Storage Site was formed shortly after President Tsai Ing-wen (蔡英文) took office in 2016.

A report published as a result of the inquiry, in late 2018, concluded that residents on Lanyu had not been notified of the plan for a nuclear waste storage site beforehand. Furthermore, the site had caused a negative impact on the islanders, mostly indigenous Tao people, in terms of their environment, traditional culture, and health.

UDN reported the residents had initially been convinced by the government the storage site was a canned fish factory. The government did not stop transporting nuclear waste to Lanyu until the 1990s, after the Tao people began protesting about the issue.

In a press conference held in Taitung on Friday, MOEA officials revealed the government's decision, based on the inquiry report, and subsequent decision to pay compensation. The president, who attended the press event, said uncovering the truth is part of the work of transitional justice for indigenous people.