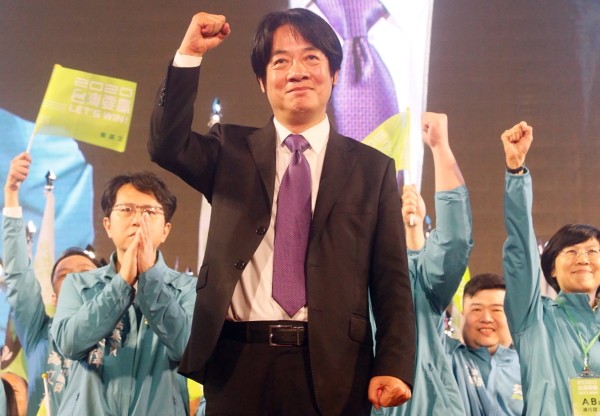 On Monday, in response to Kuomintang (KMT) presidential candidate Han Kuo-yu's (韓國瑜) claim that DPP leaders are pushing for independence and to make it clear what direction they want to take the country in, Lai stated on Facebook that Han's embrace of the "One China" principle and the "1992 Consensus" will only lead to unification with China and the "death" of Taiwan. Lai then wrote that he is a "pragmatic worker for Taiwan independence."

Lai then gave a "pragmatic response" that listed three points:

On Thursday (Nov. 21), China's Taiwan Affairs Office responded by saying that "reunification" of the two sides of the Taiwan Strait is something that cannot be stopped by any nation or force. It then went on to say that "'Taiwan independence' is a dead end, and it will only bring profound disaster to Taiwan. It will surely be opposed by all Chinese people, including Taiwan compatriots," reported Reuters.

At a press conference that day, Chiu Chui-cheng (邱垂正), spokesperson for the Mainland Affairs Council (MAC), said, "The spokesperson for the Taiwan Affairs Office of the Chinese Communist Party has always failed to grasp the people's situation and opinion and has failed to recognize the reality of the standard rhetoric," reported CNA. Chiu then said that "The Republic of China [Taiwan] is a sovereign country, and Taiwan has never been a part of the People's Republic of China."

Chiu said that the people of Taiwan firmly oppose the "one country, two systems" framework of the Chinese Communist Party (CCP). Chiu added that Chinese authorities should "not dream of escalating the situation and interfering in Taiwan's elections," according to the report.

Chiu closed by saying, "Taiwan's 23 million are wise and will show their firm will to protect sovereignty through democratic means."