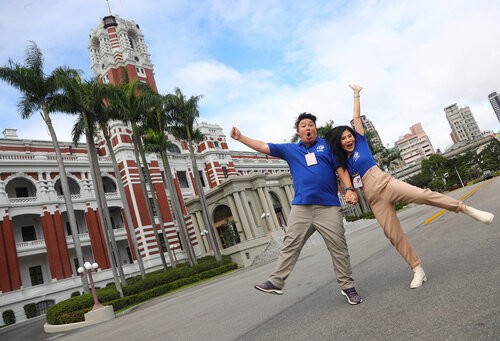 A Thai couple who spent the night inside Taiwan's Presidential Office Building, said they were impressed by the wall-less compound, noting that the 100-year-old structure reflects the openness of Taiwan's government to the people.

"We saw how close the place is to the people," said Kanisorn Pringthongfoo and Varaporn Rasmeekajorndej, Thai vloggers who operate the travel website ibreak2travel, on Thursday.

There are usually large walls around prime ministerial residences or VIP offices, making them forbidden areas, Pringthongfoo told CNA in an interview after the two Thai nationals spent a night in a guest room inside the Presidential Office Building. "But here, it's open," he said.

"We visited Taiwan many times, we know Taiwan very well. But there something surprised me -- the Presidential Office Building," Pringthongfoo said. "I can feel the humbleness of the place to the people."

The couple are one of 10 pairings who won the right to "Spend a Night in the Presidential Office Building," a program co-organized by the General Association of Chinese Culture, the Tourism Bureau, the Ministry of Foreign Affairs and supervised by the Office of the President.

More than 160 applications were received by the organizers after the campaign was launched in August and the 10 pairs of lucky winners started to spend the night in the security standby room turned guest room on Oct. 9.

The Thai couple were the sixth pairing to spend the night in the compound for a night. They learned about the program from Taiwan tourism's Facebook fan page and decided to send an audition video to try their luck, the couple told CNA.

"I have been to many countries and stayed in many luxury hotels, but this is the most exciting trip of my life. A once in a lifetime experience. I could stay in a presidential office building," said Rasmeekajorndej.

The guest room is well decorated and President Tsai Ing-wen (蔡英文) even prepared a welcome card and delicacies from Hualien as snacks, she added.

After visiting the room, the couple viewed an exhibition on the history of Taiwan and praised its transition to full democracy in such a short period.

"Taiwan is not a very old country, but it is not a country ruled by a dictator nor an emperor. It's ruled by the people ... The success of this country comes from its people," Pringthongfoo said.

"I think the story of Taiwan will make many Thai people understand the difference between the Taiwanese, Chinese and Hong Kong people. Everyone looks Chinese, but each land has its own story," he added.

Pringthongfoo said the "Spend a Night in the Presidential Office Building" program, is a "wise move" that could change the way foreign nationals perceive Taiwan.

The couple arrived in Taiwan on Nov. 19 for a six-day trip. In addition to Taipei, they will visit the harbor city of Keelung, which is not well-known to most Thais.

After returning to Bangkok, they will start to share videos on social platforms detailing their experience in the Presidential Office Building and other things they saw in Taiwan.