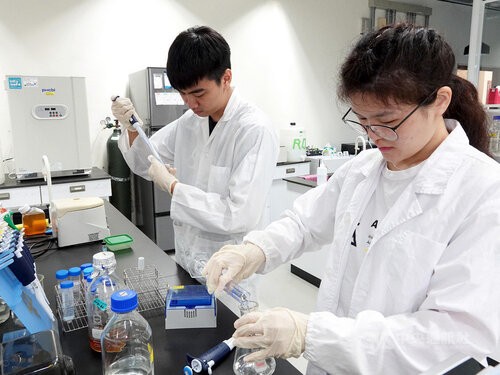 A team of students from National Chung Cheng University won a silver medal for developing a fast screening device that detects the African swine fever virus (ASFV) at the International Genetically Engineered Machine Competition (iGEM) in the United States earlier this month, the school said Thursday.

Sixteen students from five colleges at the Chiayi County-based university formed a team last year to participate in the iGEM competition held in Boston, the school said in a statement.

The Taiwan team was led by Wang Wei-cheng (王瑋晟), a student from the university's Department of Biomedical Sciences.

This year, 353 teams from universities all over the world took part in the competition, according to the statement.

Wang said that iGEM aims to inspire teams to work on solutions to problems in their local area and so the Taiwan team decided to develop a device to prevent a widespread epidemic by early detection of ASFV.

ASFAST is capable of detecting ASFV on the spot and uploading the results immediately to an online database, to allow rapid containment of any outbreak. The machine has a function that enables viral DNA detection, the school said.

The development of the device prototype is still in the trial phase and it requires 30-60 minutes to get results using ASFAST.

The technology could be applied to the detection of many different diseases, according to the statement.