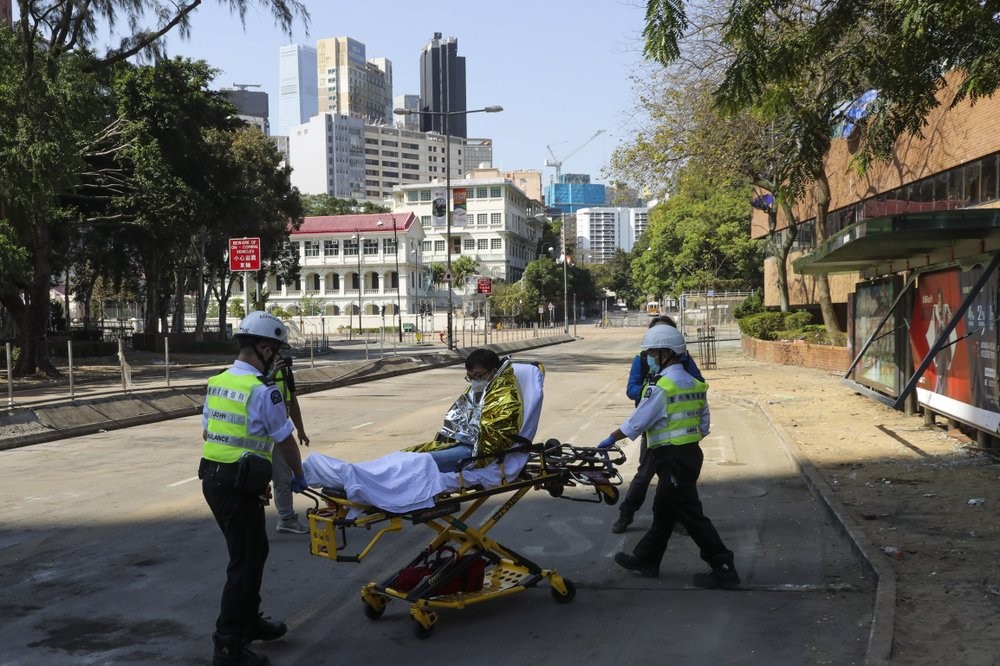 A small but determined group of protesters remained holed up Thursday inside a Hong Kong university campus as the city’s largest pro-Beijing political party urged voters to “kick out the black force” in upcoming elections seen as a key gauge of public support for anti-government protests.

At least a few dozen protesters at the Hong Kong Polytechnic University, that has been ringed by police for days, resisted pleas to surrender amid fears of being arrested. They are the holdouts from a much larger group that occupied the campus after battling police over the weekend. Some 1,000 protesters have either surrendered or been stopped while trying to flee.

The city’s largest political party slammed the flareup in violence in the past week and urged some 4.1 million voters to use the ballot box this Sunday to reject the “black force” that had thrown the semi-autonomous Chinese territory into unprecedented turmoil since June.

“The black force say they want to fight for freedom but now people cannot even express their views freely. We have even been stripped of our right to go to school and work,” said Starry Lee, who heads the Democratic Alliance for the Betterment and Progress of Hong Kong.

The party is contesting 181 of the 452 district council seats, a low-level neighborhood election held every four years. For the first time, all the seats will be contested and a huge win by the pro-democracy bloc could bolster the legitimacy of the protest movement.

Protesters, who believe China is increasing control over the territory, are demanding fully democratic elections and an independent probe into alleged police brutality against demonstrators.

The government, which rejected the demands, has warned the polls could be delayed if violence persists and transport links are disrupted. Earlier Thursday, there were long lines and delays at some subway stations. Some stations remained shut and protesters tried to block train doors from closing but the disruption was relatively minor.

A Hong Kong restaurant owner was deported from Singapore for organizing an illegal gathering last month to discuss the protests, Singapore media reported. Alex Yeung, who founded the Wah Kee restaurant chain and is a staunch pro-Beijing supporter, will also be barred from entering Singapore without prior approval.

In a video posted on YouTube from Singapore’s Changi Airport, Yeung said he has been warned to refrain from any criminal conduct. He didn’t say where he was heading but urged Hong Kong residents to cast their vote on Sunday to “reject violence and support peace.”

Lee said the party’s candidates have faced threats and some have even been beaten up but they are ready for a “tough battle.“

“We believe that if we are united and if everyone comes out to vote, Hong Kong can be restored and violence can be stopped,” she said at a campaign event in a park downtown with dozens of the party’s candidates.

Lee and some candidates kicked black footballs as a symbolic gesture to banish the black-clad protesters.

More than 5,000 have been arrested since the protests started in June over a now-abandoned extradition bill that would have allowed criminal suspects to be sent to mainland China for trial. The protest has since swelled into an anti-China movement as many fear a loss of freedoms guaranteed to the former British colony when it returned to Chinese control in 1997.

Pressure ratcheted up on Hong Kong as the U.S. Congress approved legislation late Wednesday to sanction officials who carry out human rights abuses and require an annual review of the favorable trade status that Washington grants Hong Kong. Another bill bans export of tear gas and other non-lethal tools to Hong Kong,

President Donald Trump is expected to sign the bills into law, which is sure to anger China and jeopardize trade talks between the two economic giants.

“If the U.S. continues to make the wrong moves, China will be taking strong countermeasures for sure,” Foreign Ministry spokesman Geng Shuang said. “No one should underestimate China’s determination to safeguard the interests of national sovereign security and development, to implement the ‘one country, two systems’ policy and to safeguard Hong Kong’s prosperity and stability.”

Hong Kong’s Financial Secretary Paul Chan said that the U.S. legislation was baseless and an unnecessary meddling into the city’s affairs. He urged Washington to reconsider, warning it would also hurt the interest of more than 1,000 American businesses in Asia’s top financial hub.