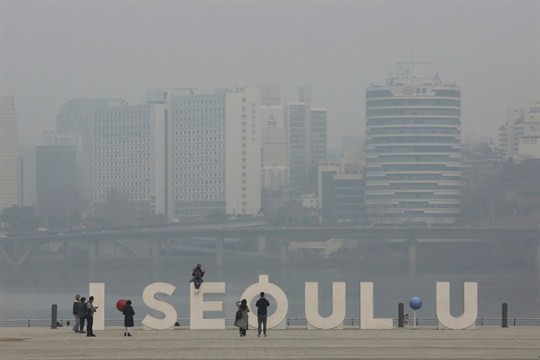 TAIPEI (Taiwan News) — Up to 80 percent of the PM2.5 air contaminants in South Korea come from China during the winter and early spring, according to a collaborative study carried out by experts in China, South Korea, and Japan.

South Korea's National Institute of Environmental Research (NIER) has released a joint report based on findings by experts in South Korea, Japan, and China, according to the Yonhap News Agency. Scientists found that in general, 50 percent of air pollution in South Korea and Japan is caused by domestic factors, while 90 percent of China's air pollution is made locally.

During this period, only 18 to 31 percent of air pollutants are locally produced in South Korea, while 69 to 82 percent come from overseas, with China accounting for the vast majority, according to a survey by NIER. A major factor causing this is the fact that the communist country switches on central heating for all areas north of the Yangtze River on Nov. 15 and turns it off on March 15.

As heating systems in China are primarily powered by coal, a high percentage of which is the cheap and dirty lignite variety, PM2.5 levels spike alarmingly throughout northern population centers during the winter. In the case of Taiwan, a Taiwanese professor and former Bell Labs researcher has come to the conclusion that the single largest source of PM2.5 pollutants in the country's air is also China at around 37 percent.