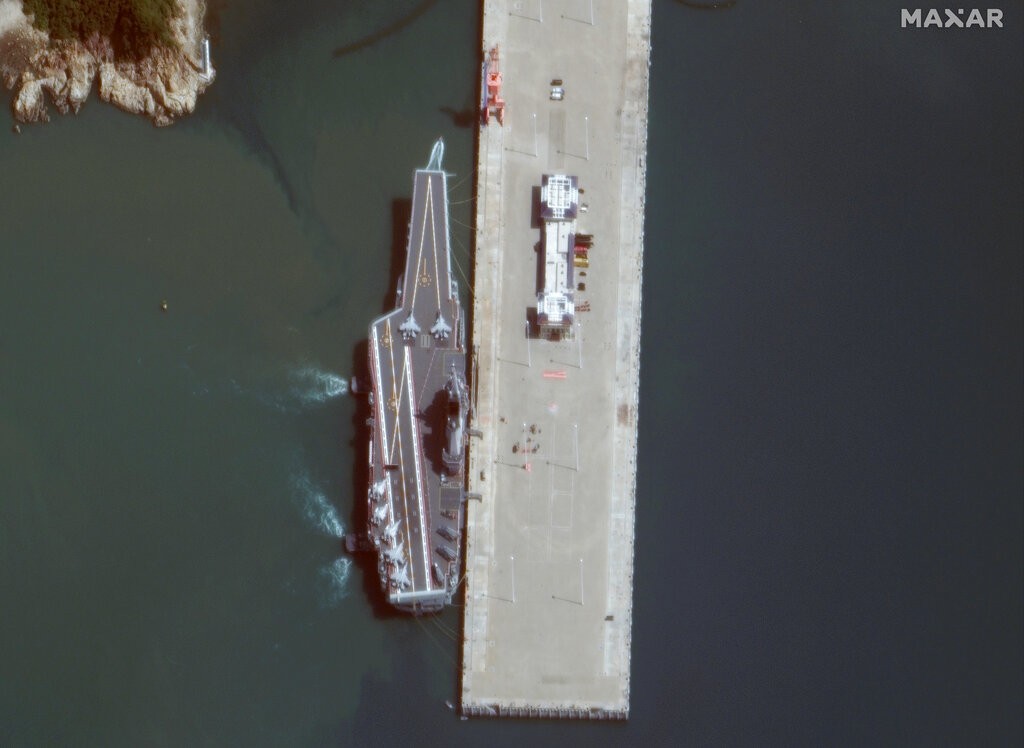 TAIPEI (Taiwan News) — After prowling in the Taiwan Strait on Sunday (Nov. 17), a satellite image has been released of China's first domestically built aircraft carrier docked at a base on Hainan Island.

The China-built carrier, currently dubbed the Type-001A, transited through the Taiwan Strait from Liaoning province's Dalian Shipyard to Yulin Naval Base on Hainan Island. In a satellite image taken by Maxar Technologies' WorldView-1 satellite while it was docked at the base on Tuesday (Nov. 19), at least seven Shenyang J-15 fighter jets, a Chinese copy of the Russian Su-33, and four helicopters can be seen.

The ship's passage through the Taiwan Strait was part of its ninth set of sea trials, which covered 4,000 kilometers over the course of four days, according to Sina Military (新浪军事). The warship's transit through the strait occurred on the same day Taiwanese President Tsai Ing-wen (蔡英文) named William Lai (賴清德) as her running mate for the 2020 presidential election.

During a press briefing on Tuesday (Nov. 19), a reporter asked Tsai what her response was to the news that a Chinese aircraft carrier had steamed through the Taiwan Strait. Tsai said that China's interference in Taiwan's elections is not a "one-day or two-day event," adding that "It's obvious that there is a consensus among almost all Taiwanese that China's use of various ways of interfering in Taiwan's elections is undermining our democracy," reported Liberty Times. Sina Military reported that the Type-001A departed from Dalian with two frigates. After entering the Yellow Sea, two more frigates from Shanghai joined the aircraft carrier battle group before it headed south toward the Taiwan Strait.

Vietnamese military analyst Duan Dang released a satellite image showing the formation lurking in the strait. The Type-001A can be seen in the middle of the group, with four frigates on the port side of the carrier, one warship to its stern, and another vessel on its starboard side.

According to Sini Military, this arrangement was designed to try to block the view of the ship from Taiwanese reconnaissance. Some Chinese military commentators believe that the ship is combat-ready and will soon be named the "Hainan."