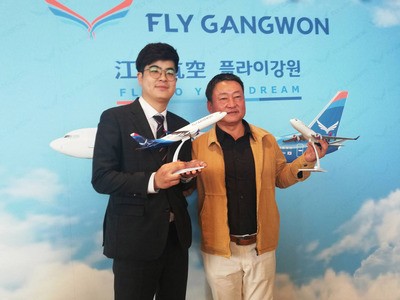 Fly Gangwon, a new South Korean low-cost carrier, announced Wednesday that it will launch its first international route with a flight to Taiwan Taoyuan International Airport on Dec. 26.

The budget airline said it will offer a daily direct service between Taoyuan and its home base, Yangyang International Airport, using its 737-800 aircraft, which can carry 186 passengers.

After the Dec. 26 launch of the Taoyuan route, two more destinations in Taiwan -- Taichung and Kaohsiung -- will be added next year, on Jan. 29 and March 29, respectively, the carrier said.

Fly Gangwon, which launched its operations earlier this month with a domestic service, said it is also aiming to expand into Southeast Asia with direct flights to Hanoi and Ho Chi Minh cities in Vietnam; Bangkok, Thailand; and the Philippines, in the next two years.

Hong Kong is also on the list of markets Fly Gangwon is planning to enter in two years’time.

Yangyang, a small international airport in Gangwon Province in northeastern South Korea, serves the nearby areas of Sokcho, Gangneung and Pyeongchang.