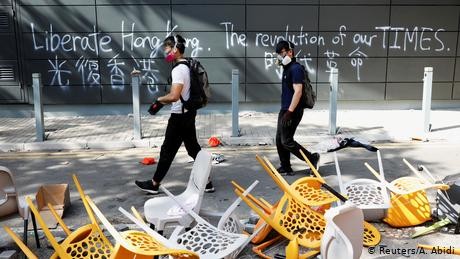 The People's Army of China was on the streets of Hong Kong over the weekend. Officially, soldiers from the mainland are only allowed to intervene if the government of Hong Kong formally asks for help. Men wearing shirts that identified them as members of a "counterterrorism brigade" admitted that they were part of a special operations unit but had not been given orders. They said they had volunteered. They cleaned up the city, removing barricades and rocks from the streets.

It is obvious that soldiers in such a tense situation would never act without orders from above. There are politicians in Beijing who apparently thought that this move made sense. Officials wanted to show that the military is ready, but they also wanted to show that the government's intentions are peaceful for now. Protesters saw the presence of mainland troops as a provocation. The violence continues. The birds are being poisoned by tear gas and falling dead from the sky. It is apocalyptic.

Hundreds of students had barricaded themselves inside the Hong Kong Polytechnic University in Tsim Sha Tsui, which sat besieged by police in a cloud of tear gas. Nerves were on edge. The police ordered the protesters to move out but could not guarantee that they would not be punished. There was even the threat that they could be shot. After three days, a few hundred fled, but several dozen remained late Wednesday.

City-state Chief Executive Carrie Lam failed to reach out early to the protesters. She barricaded herself off from the protesters from the start. Her efforts at leadership included introducing an absurd ban on masks that the Supreme Court has ruled unconstitutional. She is losing support — even among people who had initially opposed the protests. She does have one strategic ally, however: Chinese President Xi Jinping said he had a high degree of "trust" in her when she recently went to Beijing.

Xi has a dilemma. If he criticizes Lam, he will be intervening in Hong Kong's affairs. If he gives her free rein, he becomes her enabler. "Hong Kong's most pressing task is to bring the chaos to an end and restore order," Xi said, Solomon-like. The state media, such as the Global Times, have been clearer in their support of Lam, calling protesters a "mob" and sensationalizing their coverage with one-sided images of violence. This is what the German broadsheet Bild in its pro-police coverage of protests against the G20 summit in Hamburg in 2017. The difference is that Bild did not receive its orders directly from Berlin.

It would damage China's global reputation if police or military from the mainland were to intervene. The government is not yet prepared to pay this price. This is why Lam has been left in the lurch. She does not seem willing to compromise beyond finally scrapping a proposed law that would have permitted extraditions to the mainland — the catalyst of the protests, though the movement's goals have grown to include true autonomy and democracy for Hong Kong.

Lam should try again. An independent inquiry into police misconduct would not do any harm. However, it is a problem that many of the protesters don't seem to want to negotiate and that their movement has no leader. There is nobody for Lam to talk to.

The solution seems to be for Lam to resign, but this would only work if she were succeeded by somebody whom the protesters trust. And this somebody is not so easy to find. However, time is against the protesters. Hong Kong is about to enter a recession, and the resulting economic pressure could dampen the mainstream's appetite for dissent. The next shimmer of hope is the upcoming district elections — if they are not postponed.

Or the central government could attempt a true public relations coup: Why should the "one country, two systems" compromise negotiated as part of Britain's handing over of Hong Kong to China expire after 50 years? Why shouldn't it be permanent if the city-state's strengths — free press and robust markets — are so important for southern China? This would also help to allay concerns in Taiwan. But mine is probably a naive hope. The central government is unlikely to even try that.

DW's editors send out a selection of the day's news and features. Sign up here.