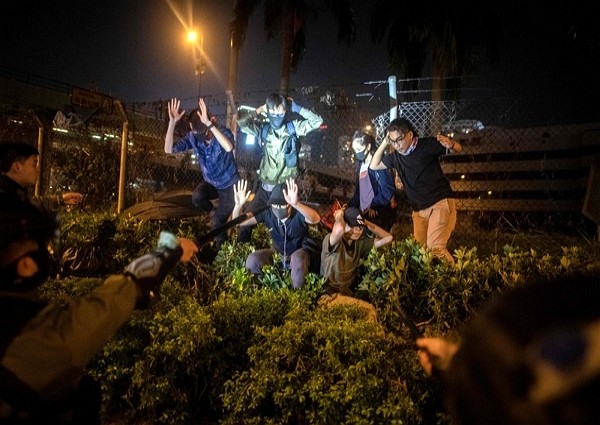 Hong Kong (CNA) – A Taiwanese high school girl was released on bail Wednesday from a Hong Kong police station, one day after she was arrested while attempting to leave the police-besieged Hong Kong Polytechnic University.

She also said her daughter was not charged with any offenses, but must report to Hong Kong police in late December.

Tai was not prevented from leaving Hong Kong, her mother said.

Her daughter "is in good shape," said her mother, who added that Tai was offered food, clothes and a blanket at the police station. "No one assaulted or used abusive language against her during her detention."

Tai said she suspects that it was because Mainland Affairs Council (MAC) officials intervened that Hong Kong police did not treat her badly. The MAC is Taiwan's top authority in charge of China affairs.

She thanked the Taipei Economic and Cultural Office in Hong Kong for its assistance and also expressed gratitude to the media for reporting the arrest, drawing attentions of the relevant authorities to the case.

Meanwhile, the MAC confirmed Tai's release in a statement issued earlier in the day, saying that it will continue to provide care and legal assistance if needed.

Tai was arrested after leaving the university with other high school students with the assistance of a group of high school principals who came to the rescue of some 100 minors barricaded in the school's campus following violent clashes between protesters and police since last week.

She was then held at a police station in Kwai Chung because she is already 18 years old, according to the MAC.

According to Tai's mother, her daughter left her home at around noon Sunday and said she was heading for Mongkok before approaching Tsim Sha Tsui at around 4 p.m.

She might have been dispersed by police in Tsim Sha Tsui and forced to run onto the campus of the Hong Kong Polytechnic University, where hundreds of protesters have been trapped until now, Tai's mother said.

Tai was just passing by and did not take part in the protests at the university, the mother further said, adding that her daughter tried to run away, but all the exits had been barricaded by police.