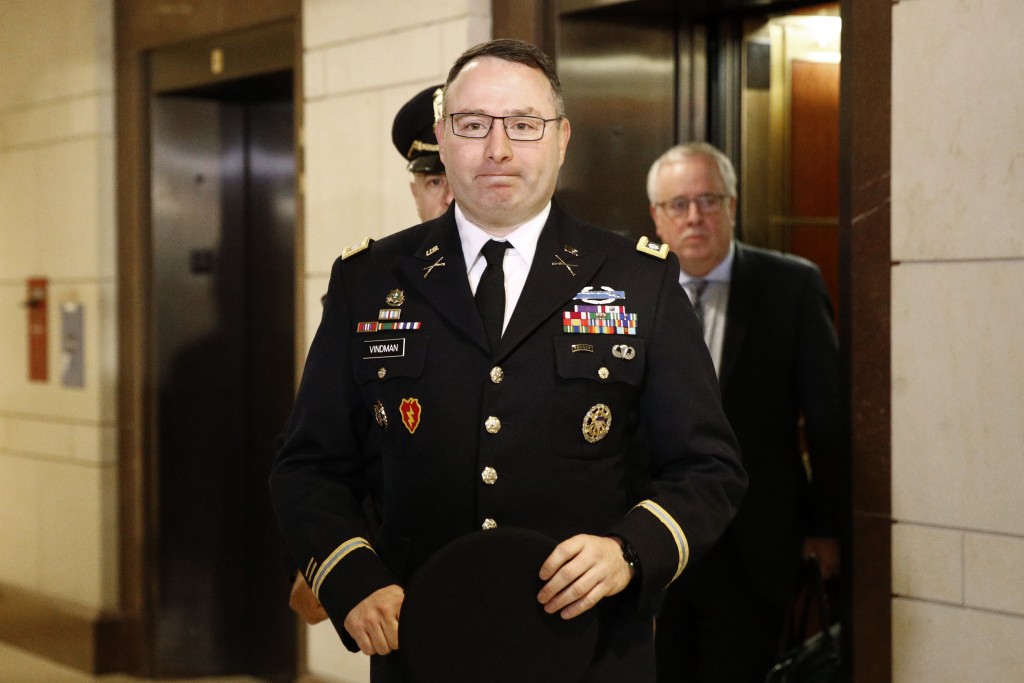 WASHINGTON (AP) — The decorated soldier and White House aide who saw it as his "sacred duty" to speak out against President Donald Trump’s Ukraine pressure campaign is about to get his chance to tell his story publicly.

But when Lt. Col. Alexander Vindman appears before the House impeachment panel Tuesday, Democrats and Republicans are expected to press competing narratives about the 20-year Army veteran and his tenure on the White House National Security Council.

When he spoke to House investigators in a closed-door session last month, Vindman said he was concerned that Trump’s push for Ukraine’s leader to investigate former Vice President Joe Biden and his son’s dealings with the energy company Burisma in the eastern European nation was harmful to both Washington and Kyiv’s interests.

“I did not think it was proper to demand that a foreign government investigate a U.S. citizen, and I was worried about the implications to the U.S. Government's support of Ukraine,” Vindman said in his deposition.

“I realized that if Ukraine pursued an investigation into the Bidens and Burisma, it would likely be interpreted as a partisan play, which would undoubtedly result in Ukraine losing the bipartisan support it has thus far maintained. This would all undermine U.S. national security.”

Vindman, a central figure in the Democrats’ case that Trump abused his power, also said in closed session that he twice raised concerns that Trump and his European Union ambassador, Gordon Sondland, inappropriately pushed Ukrainian leaders to investigate the Bidens.

But Vindman’s former boss , Tim Morrison, said in his own deposition that he and others had concerns about Vindman’s judgment.

Under questioning from GOP impeachment counsel Steve Castor, Morrison said others at the White House had raised concerns that Vindman might leak information. He also said that senior NSC official Fiona Hill had “raised concerns about Alex’s judgment” as the two discussed the strengths and weaknesses of their team.

Morrison succeeded Hill as the top NSC adviser on European affairs in July but left the post last month.

Morrison, who is also scheduled to testify publicly on Tuesday, said at one point he decided to exclude Vindman from conversations at the NSC that could be related to the eventual inquiry.

“I took steps early on to attempt to protect my people from being dragged into this process -- what I expected would become a process,” Morrison said of Vindman. “And when I saw that there was a process that was going to happen, I took steps to ensure that neither myself nor they would subsequently be accused of coordinating testimony.”

Vindman said that the White House’s rough transcript of the July 25 Trump-Zelenskiy call excluded some key passages, including an explicit mention by Zelenskiy of Burisma Holdings, the energy company where Biden’s son served on the board. The Army officer said that he pushed to have the transcript edited to reflect the missing passages but they were not included.

Morrison, however, said that the only edits Vindman, a fluent Ukrainian speaker, requested were related to corrections in translation. Those changes, Morrison said, were incorporated into the memorandum of the call.

Rep. John Ratcliffe, a Texas Republican, pushed back against Vindman’s contention during his deposition that Trump demanded Zelenskiy open an investigation on the Bidens.

But Vindman countered that Ratcliffe was discounting the dynamic between Trump and Zelenskiy, who desperately wanted to demonstrate the strength of the U.S.-Ukraine relationship to Russian President Vladimir Putin. Ukraine is entrenched in a more than five-year war with Russian backed separatists in the eastern part of the country.

Vindman was only 3 years old in 1979 when he and his two brothers, father and grandmother fled Ukraine, then a Soviet republic, for the U.S. His twin Yevgeny is an attorney on the NSC.

Earlier in his Army career, he served as an infantry officer and did tours in South Korea, Germany and Iraq. In October 2004, not long into his yearlong tour in Iraq, he was wounded by a roadside bomb and awarded the Purple Heart, according to the Defense Department. Vindman showed up for his closed-door deposition in full uniform, including his Purple Heart ribbon, a Ranger tab and Combat Infantry Badge.

Since 2008, he's served as a foreign area officer specializing in Eurasia, leading him to stints in Kiev and Moscow. He also served as a political-military affairs officer for Russia for the chairman of the Joint Chiefs of Staff. He moved to the Trump White House in July 2018 after being tapped to serve on the National Security Council.

Trump has slammed Vindman as a "Never Trumper" who he was unfamiliar with. Voting records show Vindman was previously registered as a Democrat.

"Supposedly, according to the Corrupt Media, the Ukraine call 'concerned' today's Never Trumper witness. Was he on the same call that I was?" Trump tweeted. "Can't be possible! Please ask him to read the Transcript of the call."